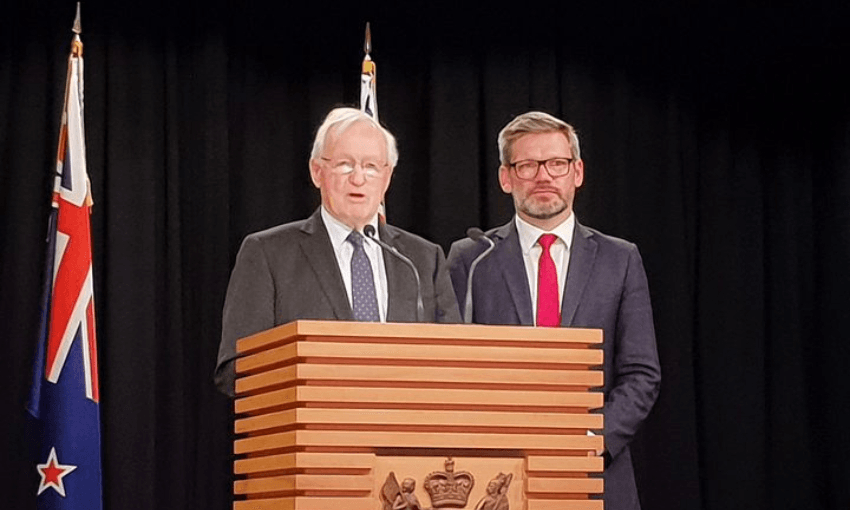 The Bulletin: Bolger back for workplace relations battle

Good morning, and welcome to The Bulletin. In today’s edition: Jim Bolger is back, Housing NZ CEO set to front up, and logging debris causes havoc after Tologa Bay flooding.

Sector wide collective agreements, and minimum pay and conditions across industries, will be investigated by a government working group. The working group will look at ways to implement what are being called Fair Pay Agreements, between unions and employers. Interest has a comprehensive report on why minister Iain Lees-Galloway is pursuing FPAs, and why businesses are expressing alarm. It’s being described on Stuff as the biggest shakeup to industrial relations in years. The working group will be led by former PM Jim Bolger.

In some ways Mr Bolger is a circular choice to lead the group, as it was his government that passed the 1991 Employment Contracts Act. It’s legislation that many unions consider hugely damaging to workplace relations, and created the conditions that the new legislation is attempting to address. During his widely cited 9th Floor interview released last year, Bolger admitted that the employment policies pursued by his government had failed – that’s republished here on The Spinoff. The NZ Herald’s Claire Trevett says it’s a political coup for Labour, to have once again secured the services of the former National PM, to push through changes National will oppose.

For those born too late to have any memory of the Employment Contracts Act (myself included) what were the effects? Economist Brian Easton concluded in this 1997 study that it advantaged employers over workers, did nothing to raise productivity, and next to no impact in raising real wages.

Speaking of going back in time, National are warning that the changes “could take NZ back to the 1970s,” when strikes and disputes were more common, reports Radio NZ. However, industrial action like strikes will not be permitted during FPA negotiations.

Housing NZ say they were tipped off about a tenant being a meth addict by Auckland DHB, after he had sought help from them, writes Russel Brown for The Spinoff. The tenant was then kicked out of their house after a contamination test, and Brown says it’s an “alarming breach of privacy,” and a disaster for drug rehab services. But the Auckland DHB disputed that they had made any such tipoff, in response comments published by Stuff.

Just a heads up on this story: it could be about to have a significant development. Housing NZ’s CEO Andrew McKenzie has so far refused all interview requests – noted by this story on Radio NZ – but last night Newstalk ZB tweeted that they would have him on at7.05am for his first interview since the scandal broke. Morning Report have also tweeted that he’ll be on just after the 7.00 news, so one of them at least is likely to be a pre-record. Either way, if you miss it, they’ll likely be rushed up by the various online teams at each station.

Logging debris that smashed through houses in Tologa Bay is being blamed on forestry mismanagement, reports Radio NZ. Locals say they have been warning for years about leftover logs and branches, known as ‘slash’. The slash also caused damage by clogging the Waiomoko river, increasing the amount of water flowing onto nearby paddocks and roads.

I missed this one yesterday, but Stuff journalist Tony Wall has unleashed a three-part investigation into the use of methyl bromide in New Zealand. The toxic fumigant is used heavily in forestry to kill bugs, and New Zealand’s use of it is soaring. But exposure can cause lung damage and nerve system damage, and even death. Methyl bromide is banned in many countries, including the UK and European Union.

There has been a surge in both suicides in prison, and attempted suicides, as the Corrections system grapples with a ballooning inmate population, reports the NZ Herald. Corrections minister Kelvin Davis says the suicides shouldn’t necessarily be linked to overcrowding, but barrister Moira Macnab says the data shows a correlation.

The decision to end offshore oil and gas exploration was made by party leaders alone, rather than cabinet, documents released by the government show. Stuff reports that it was a political decision, with PM Jacinda Ardern defending it as a method that will be used sparingly. National are outraged, with leader Simon Bridges calling it “governing by decree”. And the documents also show that the government was warned by its officials that the move could have serious economic ramifications, reports Radio NZ.

Dairy farmers may increasingly sell up to make the best of a bad situation, the NBR reports. They cover comments from bank Westpac, who say many farmers are “marginal at best” – barely making any profits – but that there are also more sellers than buyers out there at the moment, which could put pressure on land prices.

And, we’ve got some very exciting news coming on The Spinoff today! But I’m not allowed to tell you what it is yet. Make sure you have a look at thespinoff.co.nz around 11.00 for all the details.

Right now on The Spinoff: Former Auckland Grammar headmaster John Morris has hit out at the politicisation of education policy. Pod on the Couch talks to Katchafire about their South Pacific reggae legacy. And speaking of music, satirist Danyl Mclaughlan has covered the ‘announcement’ from the ‘National Party’ about a benefit concert for victims of the former government.

We do this every year it seems, but each time the calls grow louder. Should Matariki become a nationwide public holiday? Or is the current schedule better left alone?

I’d love to get your feedback on this, so please email me – thebulletin@thespinoff.co.nz with any thoughts, which will be published on Thursday. Whether that’s just a simple yes or no, or a more detailed view, do get in touch.

One particular take I greatly enjoyed reading came from Northern Advocate writer Michael Botur. He declared that Matariki should be a time to remember that we in the modern world are all soft, and that none of us would’ve survived the tough life early Māori settlers had to endure hundreds of years ago. I think his point was made tongue in cheek, but he’s not wrong – modern NZ owes a great and complicated debt to the first arrivals to these shores.

New Zealand is getting an expansion team into Australia’s baseball competition, reports the NZ Herald. The competition will have two four-team conferences, with six Australian teams and one based in South Korea. NZ’s team is likely to play out of North Harbour Stadium, which is fairly under-utilised outside of North Harbour’s Mitre 10 Cup season. And the announcement is a great excuse to share this incredible feature on efforts to get baseball going in New Zealand, from Philadelphia Phillies fan-site The Good Phight.

Can baseball take off here? I’m a bit dubious – New Zealand and Auckland’s sporting landscape is already crowded, and in terms of American sports there are far more NZ based fans of the NBA and NFL. Then again, baseball is huge in Korea and Japan, and if those expat communities in Auckland get behind the local team there could be enough support to make it viable.

And in the NBA, fierce rivals LeBron James and Steph Curry have found some common ground, reports Deadspin. Strong words have been exchanged between the pair during the Cavaliers vs Warriors finals series. But they agree on one thing – no matter who wins, neither team will be visiting Donald Trump’s White House to celebrate. The Warriors lead the series 2 nil.