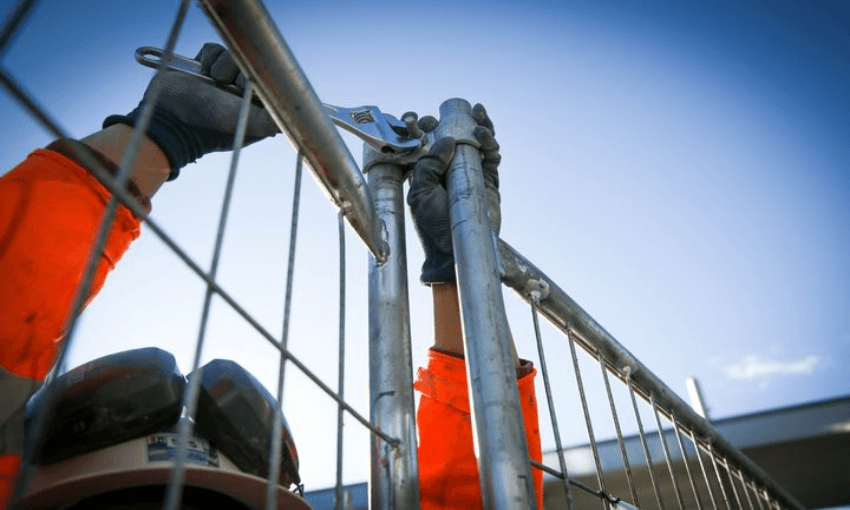 Good morning, and welcome to The Bulletin. In today’s edition: Government moves to address construction concerns, NZ First links to Wally Haumaha keep getting revealed, and push to bring back health targets.

The government has agreed to stop low-balling construction companies who bid on contracts, in an effort to save the sector from collapse. Stuff reports that the decision came after a crisis summit with industry leaders, after concerns over the collapse of Ebert Construction. Bidding on government procurement contracts with tiny margins has also damaged Fletchers, who have now pulled out of vertical construction, and Hawkins, which has collapsed completely.

The money to build is an issue here too. Leonie Freeman writes on The Spinoff that the collapse of finance companies after the GFC continues to have an impact on project financing, as they put up a lot of the money for “second tier” developments.

Skills shortages in construction are also something that the government has been looking at, as the issue becomes more acute, reports Radio NZ. Around 250,000 people are employed in the construction industry, but it’s nowhere near enough. Interest reports that there are concerns that productivity is dropping too – in real terms, the amount of floor space built per worker hour.

What will this mean for the current cracking pace of building activity? Because to put it bluntly, there’s an awful lot of building that needs to happen over the next few years. None of it is at all good news for the government, because if the construction sector doesn’t have enough capacity, it could slow down or nullify the effects of the flagship Kiwibuild policy, a lot of which will be so-called ‘vertical construction.’

The links between the NZ First party and deputy police commissioner Wally Haumaha keep unfolding, reports the NZ Herald. Mr Haumaha is the chairman of the party’s deputy leader Fletcher Tabuteau’s marae, and party leader Winston Peters spoke at a function last year in honour of Mr Haumaha’s promotion to the rank of assistant police commissioner. NZ First minister Tracey Martin has been in charge of appointing the person to lead the inquiry into Mr Haumaha’s promotion, and all involved have denied there are any conflicts of interest.

The National Party is pushing for the government to bring back health targets, reports the ODT. Spokesman Michael Woodhouse says they’re useful to give “clear and specific focus for action,” and has entered a private members bill into the ballot that if passed would require the minister to set between six and 12 targets. But minister David Clark says specific targets can create “perverse incentives,” and wants to develop a new monitoring system.

Care home nurses are being lured away to hospitals at an alarming rate for the sector, reports Radio NZ. The Aged Care Association is asking the government to relax immigration laws to cope with their shortage, which is currently around 500 nurses, or 10% of the total workforce. And New Zealand’s population isn’t getting any younger…

Green MP Gareth Hughes wants the NZ government to officially recognise the Armenian genocide, which was committed about 100 years ago by the Turkish government, reports One News. It remains an incredibly dicey subject in Turkey, and recognition of the genocide can carry diplomatic repercussions. Incidentally, the University of Auckland is hosting a public lecture tonight on the subject, from visiting academic Taner Akcam.

Hundreds of New Zealanders have signed a petition to make organ donation automatic, reports the NZ Herald. The petition was instigated by a woman who needs a double organ transplant, or she’ll die within two years. I’m interested to know your thoughts on this, and whether you think the system should be changed from opt-in to opt-out. What factors need to be considered for that to happen? Email me – thebulletin@thespinoff.co.nz.

And finally, in event news, bad luck if you wanted to go to New Zealand’s equivalent of Burning Man. Kiwiburn, held near Hunterville, has been cancelled for 2019, amid drawn out negotiations with council over noise restrictions, reports The Spinoff.

Right now on The Spinoff: Duncan Greive savages a prominent and bad column about day-care centres. Jeremy Moyle has a history lesson about a housing crisis in New Zealand’s colonial past. And Hayden Donnell takes a deep dive into the absurd fake news website that very serious political actor Judith Collins has been tweeting stories from.

I was alerted to this deeply concerning world news story by a reader (and please do feel free to do that, though we’ll mostly focus on NZ news) Protests in Bangladesh have been violently repressed by police, and mobs aligned with the ruling party, reports Al-Jazeera. The protests ostensibly started about road safety, but have developed into serious unrest. A major aspect of the police’s response has been the violent arrest and interrogation of a celebrated photographer and human rights activist, reports the Dhaka Tribune. Violence, censorship and persecution of journalists in the country is considered endemic by Reporters without Borders.

Allegations of illegal betting in the National Basketball League will be investigated by the police, reports the NZ Herald. The allegations concern the final minutes of a game between the Taranaki Mountain Airs and the Supercity Rangers, and some unusual reactions from players in response to a seemingly innocuous late sequence of scoring. Basketball NZ says they’re taking the allegations very seriously.

In the ruggers, the All Blacks squad for the Rugby Championship has been selected. The big talking point out of it so far is whether Richie Mo’unga should start at 10 ahead of Beauden Barrett, after Mo’unga had a true championship Super Rugby season. Coach Steve Hansen shut that down pretty sharply on Radio Sport, saying the vast experience and incumbency of Barrett would still carry the day.

And check out this kid from Avondale College, who has just been declared the world champion at Microsoft Powerpoint, reports the NZ Herald. Yes it’s a sport, and 15 year old Tristan Mona clearly has a bright future ahead of him. Government departments, educational institutions and all manner of private firms will be lining up to try and secure this talented young lad’s signature.