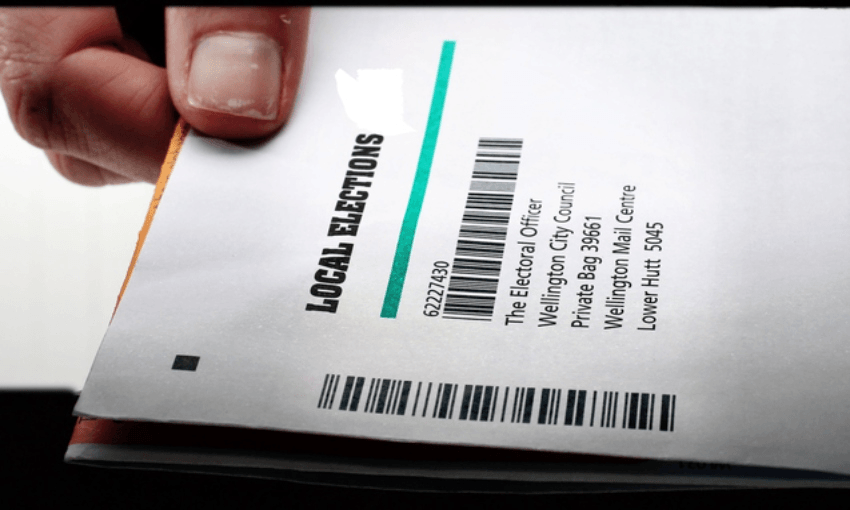 The Bulletin: Turnout looks terrible, so will changes be made?

By now it seems apparent that turnout in local body elections is going to be dire. Postal voting effectively finished yesterday, which means anyone who hasn’t yet returned their ballots will need to do so in person, at an approved location for their area. There is still time to do that, and Radio NZ reports Local Government NZ say it’s still too early to make a final call on turnout numbers. But from here it would take a minor miracle for figures to be boosted significantly.

It could be that a slower postal service means the data coming through isn’t accurate, but what data we do have is alarming. Electionz have been gathering up the daily voting returns for dozens of councils, and you can almost pick at random and see the rate is slower than in previous years. Palmerston North is well down, Nelson is slightly down despite a big weekend boost, Ruapehu District is way down, Tauranga is steady with last election which was itself down on previous years, and surely there must be some sort of delay with Wellington, where it is looking horrendously low. There are a few brighter spots – turnout is way ahead of previous years in Hurunui for example. But they’re few and far between.

There have been some well-intentioned debacles. Among them, The Spinoff reports Auckland Council one-stop voting shops actually ran out of voting papers and had to turn people away. That implies both high demand, and insufficient preparation. Waatea News also reports that many Aucklanders simply didn’t get their papers in the mail. Auckland Council is actually one of the much better resourced organisations in this respect too.

So is online voting the solution? Stuff reports PM Jacinda Ardern wants to at least take a very good look at it for 2022, and there’s a good point to be made about the postal system – and more importantly how people relate to it – not being what it once was. But none of the security concerns around online voting that come up every time it is discussed have ever gone away. Significant, nationwide expansion of in-person voting could also work as well, but as with online voting, it would require significant money, which local government organisations simply don’t have, as was shown by the rejection of an online voting trial on the grounds of cost before this election.

There’s also a wider question. Is it really the method of voting which is putting people off taking part, or are they not not interested for a whole lot of other reasons? It could be that voters are so deeply dissatisfied with the local government system that they don’t want to endorse it with their vote. Conversely, they might be broadly comfortable with how things are going, and don’t see a need to vote. Unfortunately, we just can’t be sure until after the election has taken place.

NZ First have been hit with a massive data leak, with the names, addresses, occupations and membership status of hundreds of people released. Stuff reports the documents were sent to media organisations and opposition MPs, and that the data appears to be current as of 2016. It’s the latest incident in a pattern of disgruntlement among the party membership, following the resignation of the party President last week. Party leader Winston Peters is furious, and has gone to both the police and the privacy commissioner.

A whopping surplus has been unveiled by finance minister Grant Robertson, reports One News. It’s up to $7.5 billion, which is another $2 billion on top of last year, and well ahead of projections. It certainly underlines the minister’s credentials as a prudent financial manager, but will infuriate everyone who wants to see a massive boost in spending to shore up the economy. Expect to be heavily bribed in next year’s election budget.

The government has quietly abandoned a pledge to shift their vehicle fleet to electrics by 2025, reports Marc Daalder for Newsroom. It wasn’t a structurally significant policy in the first place, given the overall state of the nation’s vehicle fleet, but the government can’t even commit to accomplishing it. It’s not the first time an environmental commitment has been watered down, and on the current evidence, it’s unlikely to be the last time either.

Incidentally, Green minister Eugenie Sage has been brutally sidelined from the decision-making process on the expansion of a mining operation, reports Politik. She blocked the expansion in Waihi on environmental grounds, which sparked fury among parts of the government who were worried about job losses. In the end, the only job lost was that of Sage, who was reportedly kept out of the loop on the review, and may have a much diminished role in these decisions in future. It’s an example that says a lot about the Green Party place in this government, with an attempt to exercise power resulting in that power being taken away.

Meanwhile, the first ever leader of the Climate Change Commission has been appointed. Stuff reports it’s former Reserve Bank chairman Rod Carr. It’s debatable how powerful the position will be, now that the Commission has been depowered down to a body that can provide recommendations, but not enforce rules.

There’s fury in migrant communities about the new conditions of the re-opened parent visa category. An example of this comes from the Indian Weekender’s Dave Ananth, who writes that the income thresholds mean it is “exclusively for a minuscule of selected elites” rather than for working class migrants. “How this government came to this idea is perplexing, putting most permanent residents and New Zealand citizens out of reach to sponsor their parents.”

Tenancy advocates say more regulation is needed, as those who complain can end up blacklisted, reports Radio NZ. The story focuses in specifically on the lower South Island and Otago, noting that overcrowded and poor quality rentals aren’t just an issue for students. One underlying issue that the advocates warn about is the continued power imbalance between tenants and landlords or property managers.

Right now on The Spinoff: Freshwater ecologist Russell Death questions why farmers aren’t embracing the marketing benefits of cleaned up rivers. Toby Manhire compares an incident on TV show Succession (spoilers!) with a real-world comparison – I can’t say more because of the aforementioned spoilers but it’s on point. Madeleine Chapman sat down for an enjoyable morning watching Mike Hosking and Jacinda Ardern having to breath the same air. The Outlander community’s cult-favourite reviewer Tara Ward looks at the trailer for the next season. Unchained XL explains what Isreal Adesanya’s UFC title win means for his first generation Afro-Kiwi community.

And local elections stuff: Josie Adams went to Palmerston North to get a load of their eclectic cast of mayoral candidates. And Kim Nutbrown and Pattie Pegler take a look at two fresh faces running in two mayoral races in deeply conservative North Canterbury.

One of the most pivotal figures in world geopolitics right now is Saudi Arabian crown prince Mohammed bin-Salman. He is modernising aspects of his country, but has also launched a horrific war in Yemen (heavily backed by the US, Britain and European allies) and is undoubtedly a dictator – and far from a benevolent one at that. This feature from the BBC looks at his rise, and what it could mean for the future of the region. Here’s an excerpt:

King Salman had made his decision as to who he wanted to succeed him and it was his favoured son, MBS. In Saudi Arabia the king’s power is absolute – there was no debate, no resistance. Mohammed bin Nayef has since vanished completely from public life.

MBS and his father had pulled off what amounted to a spectacular and bloodless palace coup. Highly ambitious and determined to reshape the country, MBS promptly set out to cement his hold on power.

It appears that not even the coveted Ranfurly Shield could bring punters in to watch Otago play over the domestic rugby season. The ODT reports that despite a storming, six-defence run for Otago, crowds were paltry. Most defences were watched by around 4-5000 people, in contrast to the 17,000 who turned up to watch a Shield game against Hawke’s Bay in 2013. It’s probably fair to say that even getting a few thousand through the gates is now a reasonable result for a provincial team.