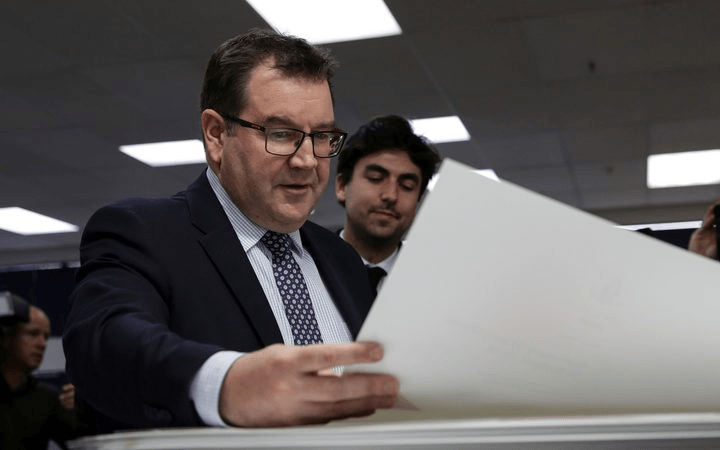 Grant Robertson with a print of his first ever Budget (Radio NZ: Richard Tindiller)

Grant Robertson with a print of his first ever Budget (Radio NZ: Richard Tindiller)

Good morning, and welcome to The Bulletin. In today’s edition: It’s Budget Day. Also, the issue of unpaid overtime in retail has exploded, and Tauranga’s council is at odds with local MP Simon Bridges over the fuel tax.

It’s Budget Day. After the political trench warfare of the last month, it will be good to see what’s actually in finance minister Grant Robertson’s plans for the next three years. At Newshub, Anna Bracewell–Worrall has a rundown of what are likely to be the most contentious issues: namely cheaper GP visits, health spending generally, and the election promise to put 1800 more police officers on the streets within three years.

On the other side of the house, National’s Amy Adams is also gearing up for her first real test as the finance spokeswoman, reports Interest. In particular, she’s attacking the new taxes she says New Zealanders have been whacked with.

Will there be some sort of exciting surprise? Tracy Watkins at Stuff says there could be one or two tucked away, but the nature of surprises being what they are, it’s hard to say where. Watkins says Labour “will mostly be wanting this Budget to be remembered for a return to its core promises – so the emphasis will be on restoring the public service through big dollops of extra cash in health and education.”

A few other key areas to watch out for: There is yet to be any announcement on the Waikeria mega–prison, and if that’s going to happen, it will be noticeably expensive. Many in the media will be keen to know how much of a boost Radio NZ gets, and what that signals for the potential RNZ+ TV channel. And speaking of Radio NZ, their political editor Jane Patterson has done a very handy rundown on the under–reported area of defence.

Finally, I’ll re–up this explainer column on Stuff, which was useful when published a few weeks ago, and especially useful today.

An astonishing number of retail workers are coming forward to complain about unpaid overtime. On Radio NZ last night it was reported that 16 retail chains are now in the spotlight for the practice – this top line from the RNZ story puts it in perspective: Tens of thousands of minimum wage workers are potentially collectively owed millions of dollars in unpaid wages. FIRST Union say they’ll continue to name and shame employers as complainants come forward.

Tauranga’s MP is at odds with the local council over the council’s support for a regional fuel tax, reports the Bay of Plenty Times. The MP, who happens to be National Party leader Simon Bridges, has vowed to repeal the fuel tax if he wins power in 2020. But mayor Greg Brownless says the Bay of Plenty needs the money to help with transport infrastructure upgrades over the  next seven years, and wants to be able to implement a regional fuel tax before 2021, which is the current date that it could be introduced.

People described as the working poor are telling their stories about the struggle to stay above water. This from Stuff, and this follow up on The Press go into significant detail about just where the small amount of money then goes out to, and are well worth reading for an understanding of the struggle.

The Commerce Commission is assessing 13 complaints made against social media advertising service Social Pages, reports the NZ Herald. Complainants say the company charged them fees they never agreed to, in some cases thousands of dollars more. Social Pages director Warren Pearson has responded by accusing the complainants of “buyers remorse.”

The full list of the various contenders, pretenders, activists and edgelords standing in the Northcote by–election has been released, and short bios of candidates have been published by Stuff. All parties in parliament are standing a candidate except NZ First (though their former candidate is standing as an independent) The vote will be held onJune 9.

The Saudi sheep scandal is rearing its woolly head again, reports the NZ Herald in a front page exclusive. More costs to taxpayers are likely, as an Auckland company that brokered the contact between the National government and the Saudi businessman Hmood Al Khalaf, was then cut out of the deal.

Foreign doctors struggling to get jobs in New Zealand, reports Stuff. The doctors say they’ve worked overseas, passed their exams to work in New Zealand, applied for dozens of jobs, but still can’t get their foot in any doors.

I’ll admit to being a bit baffled by this, and if you can clear up my confusion, please email me –thebulletin@thespinoff.co.nz. The confusion stems from the fact that as recently as last year, there were stories about New Zealand having a massive shortage of doctors being trained, in particular GPs, like this one from The Country. So, what gives?

Right now on The Spinoff: Graham Cameron is criticising the new government for not following a tikanga process in Treaty settlements. Madeleine Holden, entrepreneur, has launched a business to fix poorly written dating profiles. And Alex Casey has gone on an odyssey to discover the fate of Auckland’s disposable sanitary waste, aka, what happens to all the tampons?

I really enjoyed reading this piece about small town music scenes in New Zealand from Vice, and how living in them can be creatively liberating. There’s obviously a miniscule amount of money on offer in the NZ music industry. But there isn’t a shortage of artists who come from well outside the main centres, and this feature profiles a bunch of them. Here’s the intro:

“Stuck at what generations of Eurocentric received wisdom termed ‘the ass end of the world’, circling the sun from an archipelago in the coldest part of its largest ocean, geographic isolation has long been a source of identity and inspiration even for artists from Aotearoa’s larger cities.”

Tana Umaga’s contract as the coach of the Blues has been extended by another year, despite poor results so far, reports Radio Sport. Umaga will be assisted by fellow former All Black Leon MacDonald next season, currently the head coach of Tasman in the domestic competition. The NZ Herald’s Gregor Paul says MacDonald’s skills could complement what Umaga is currently missing, and it could signify a change in fortunes for the franchise. We’ll see – the Blues are currently last in the NZ conference, and haven’t made the playoffs since 2011.

From our partners, Vector’s Karl Check analyses Australia’s progress when it comes to shifting away from coal and gas fired power plants and onto renewable energy sources.