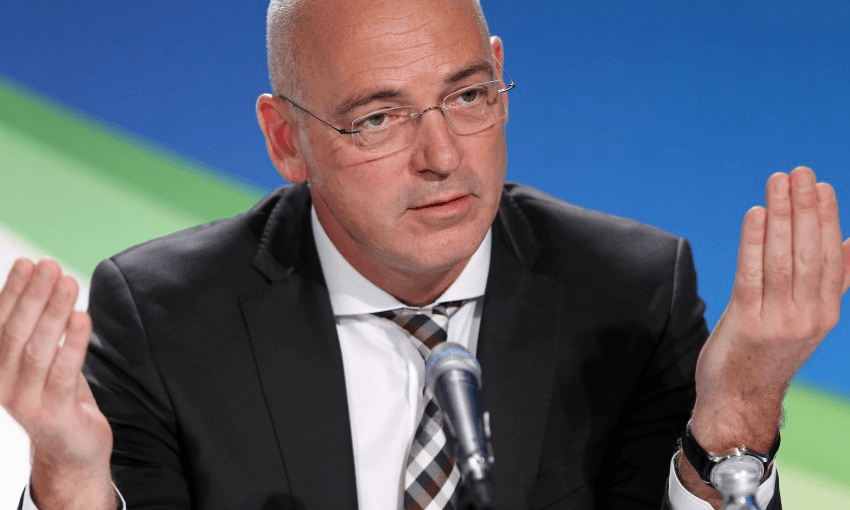 Good morning and welcome to The Bulletin. In today’s edition: Fonterra looks to future as boss resigns, confusion at the top of the coalition government, and charities board denies Greenpeace again.

There is comprehensive coverage of the resignation of Fonterra CEO Theo Spierings on the NBR. Mr Spierings stepped down on the same day Fonterra announced its interim financial results. The dairy co-operative has been forced to slash its dividend forecast, largely because of a disastrous investment in Chinese infant formula company Beingmate. Federated Farmers aren’t exactly crushed by Mr Spierings resignation, with national vice President Andrew Hoggard telling Stuff he doesn’t know if Mr Spierings “ever truly connected with farmers,” and that his results had been mixed. Mr Spierings was the highest paid CEO in New Zealand, raking in more than $8 million a year.

The NBR has also re-published a column from January, asking who will be held responsible for Fonterra’s “multi-billion dollar mistakes.” And while the cooperative is insisting Mr Spierings’ departure wasn’t due to results (full story on that on the NZ Herald) David Hargreaves on Interest suggested the announcement took the sting out of any negative PR from the results. Useful coverage on Fonterra’s future is also provided by The Country, who report chairman John Wilson may need to be re-elected later this year.

Tensions at the top of the government, with PM Jacinda Ardern rebuking MP Shane Jones over his Air New Zealand attacks, reports Radio NZ. The extraordinary episode, in which Jones called for the airline’s chairman to be sacked over regional routes being cut, has prompted a wave of comment from the press gallery. Jones himself is saying he will not be muzzled from speaking out, but as Andrew Geddis explains on The Spinoff, he’s effectively asking Air New Zealand to break the law.

Hamish Rutherford at Stuff opines that the Ardern government has been creating uncertainty among the business world through confusing mixed messages. Richard Harman at Politik says the incident has “stretched relations” between the two coalition partners. And Lloyd Burr on Newshub writes about Shane Jones describing Air NZ as “a colony of the National Party,” with Burr saying it’s an open secret Air NZ boss Christopher Luxon wants to get into Parliament with the Nats.

The Independent Charities Registration Board has once again denied Greenpeace charity status, reports Newshub. In a press release, Greenpeace says the board has been against granting them charitable status throughout the process. Earlier this week they presented a petition at Parliament, which adds weight to the independent Charities Registration Board decision that they’re an advocacy group. Conservative lobby group Family First was stripped of their charitable status last year for similar reasons.

Tensions are growing in the far North between avocado planters and community groups over water use, reports Radio NZ. The community groups say the Council is moving heaven and earth for the growers, some of whom have previously been taking water unlawfully. Given high demand is causing avocado prices to skyrocket, it seems certain the tensions will continue.

The Labour government has resurrected a bill first proposed when they were last in power. Newsroom reports a bill to give labour hire workers the right to collectively organise, and take a grievance against a secondary employer, will be taken forward by recently elected list MP Kieran McAnulty. First Union has organised thousands of labour hire workers, and has campaigned on related issues. It’s one of a wide range of reforms Labour is trying to make in employment law, including a rise in the minimum wage, and more protections for contractors.

National’s Nuk Korako is criticising the recently announced public media advisory group for not including any Māori members, reports Waatea News. Broadcasting minister Clare Curran, who set up the group, told Māori TV she was open to another panellist being included. Nuk Korako says Labour’s Māori caucus have dropped the ball, but Labour’s Willie Jackson and Nanaia Mahuta are both also supporting the push.

Auckland isn’t the only city considering a rates rise to fund water infrastructure. New Plymouth’s revised ten year plan has put forward new options, which could raise the rates bill for homeowners by up to 1.9%, on top of a 4.2% increase. The story has been given front page prominence by the Taranaki Daily News, which as an aside, is absolutely packed full of news today, so pick up a copy if you’re in the region.

Right now on The Spinoff: Joel Thomas discusses the uncertain future of creative spaces in Auckland. Rosie Morrison meets top sitarist Anoushka Shankar. And Madeleine Chapman has a guide for how you can holiday like Barack Obama.

Should you delete your facebook account? Calls for people to do just that are growing in the wake of the Cambridge Analytica scandal (explainer on The Spinoff) but it has long been well known firstly that facebook harvests huge amounts of user data, and secondly that it wields a far greater influence than just being a platform to see a pic of your Auntie’s eggs benedict.

On The Guardian, Ellie Mae O’Hagan argues that because Facebook holds detailed data on a quarter of the world’s population, the company has a huge responsibility and duty of care to their users, which they are skirting.

“If ExxonMobil attempted to insert itself into every element of our lives like this, there might be a concerted grassroots movement to curb its influence. So perhaps it’s time to start treating Facebook as the giant multinational corporation it is.”

Haydn Green, writing on Newsroom just a few days before the Cambridge Analytica scandal broke, says the platform simply reflects your own world back at you, reinforcing prejudices and making it easier for advertisers to target you.

Having said that, there have been calls to delete facebook for a long long time now, and none of them have ever really taken hold. The biggest dent that has been put in their user growth has been through younger teenagers not joining in the first place. And if you actually do decide to delete facebook, The Verge has a useful guide on how to do it properly. Want to know where I came across that article? I’ll give you a hint – it wasn’t twitter.

In sport, Stuff’s Andrew Voerman has gone back through the years as Eden Park prepares to host its 50th cricket test. The game that starts tonight will be the first day.night test held in New Zealand, and last time the Black Caps hosted England at the venue it was a thriller.