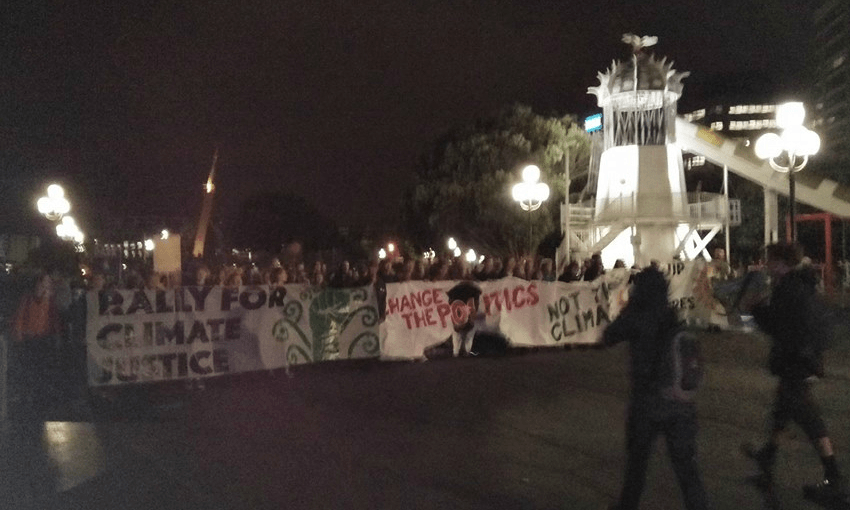 The blockade at the NZ Petroleum Conference has already started, with protesters getting onto the picket line around 5.00am (Facebook: Oil Free Wellington)

The blockade at the NZ Petroleum Conference has already started, with protesters getting onto the picket line around 5.00am (Facebook: Oil Free Wellington)

Good morning and welcome to The Bulletin, in today’s edition: Activists are blockading an oil industry conference today, nurses are set to strike, and 20,000 cows are getting culled.

Environmental activists are blockading the New Zealand Petroleum Conference in Wellington today. Spokesperson for Oil Free Wellington James Barber told the NZ Herald his expectation was that the protest at the TSB Arena would be completely non violent, but activists would be “getting in the way of the oil and gas industry.” For an indication of what the tactics will be, I wrote this last year for The Spinoff about a similar group protesting the Defence Industry conference. They’ve started early this morning – the photo above was posted to Oil Free Wellington’s facebook page at about 5.30am.

Stuff has published duelling opinion pieces today outlining the cases of PEPANZ(who represent the oil industry) and Greenpeace (who most certainly do not) PEPANZ boss Cameron Madgwick says the country and the economy needs oil and gas, and gas in particular can act as a transition fuel away from the likes of coal, to cleaner sources. But Greenpeace’s Amanda Larsson says the industry is already reinventing itself with cleaner energy sources, and New Zealand would be better off charging ahead with renewables now.

The protests put the government in a delicate situation, a week after PM Jacinda Ardern accepted a petition to end oil exploration from Greenpeace at Parliament. National party aligned pollster David Farrar wondered on his blog whether Ardern would join the blockade as well. Minister of Energy Megan Woods will speak at the conference, in what is sure to be a closely scrutinised speech for indications of how the government intends to proceed.

Nurses and midwives have rejected an offered 2% pay rise, making strike action likely. Radio NZ reports the comments of Wellington nurse Freya Head, who says nurses are overworked, underpaid and burning out. Those comments are echoed by an anonymous Stuff writer, who nursed in New Zealand ten years ago, and is now constantly told by friends not to come back to it. Nursing Review lays out some of the history of industrial action campaigns, which makes for very useful context to the possible looming strike.

More than 20,000 cows on farms infected with mycoplasma bovis will be killed, reports The Country. Agriculture and biosecurity Damian O’Connor says it’s a critical measure to halt the disease, which has now spread to 28 farms. Mycoplasma bovis causes cows to become far more susceptible to other diseases, and is considered to be a significant threat to the economy.

All but one of the infected farms are in the South Island, and newspapers in heavily affected regions are giving the story prominence. Both the ODT and Southland Times are leading their front pages with angles of farming figures supporting the cull.

The Reserve Bank has been given what Radio NZ is describing as “the biggest shake up in 30 years.” Finance minister Grant Robertson and new Governor Adrian Orr have signed a policy target agreement that will mandate the bank to try and maximise stable employment. The changes have long been signalled by Robertson, and have proven controversial, with former Governor Dr Don Brash among those hitting out at the plans.

Questions are being raised over the control of the government’s provincial growth fund, after Rodney MP Mark Mitchell accused a NZ First backbencher of trying to use project funding to silence Mitchell’s criticism. Newshub has full details of the story. NZ First’s Jenny Marcroft was allegedly delivering a message on behalf a a minister, something that party leader Winston Peters has since denied was true.

The issue is a sensitive one for parties across Parliament, and raises memories of National’s Alfred Ngaro suggesting critics of the government could face the lose of their service provider contracts. The provincial growth fund has faced criticisms of being ‘pork barrel spending‘ – government money used to buy a party favour in a region.

For almost the entire history of Sky TV, John Fellet has been at the top, or close to it. Fellet has announced his departure from Sky TV, at a time of turbulence for the broadcaster. Radio NZ’s Mediawatch has an excellent overview of how Sky struggled, rose to immense power, and then struggled again under his leadership. A Newsroom article (Business Desk) reports the service is rapidly shedding subscribers, the share price has plummeted, and they are likely to face competition for the jewel in the crown – broadcast rights for rugby. And on The Spinoff, Rebecca Stevenson has 10 numbers which illuminate John Fellet’s rise and fall.

And from our partners, Vector’s new technology engineer Kate Murphy writes about the humble LED, and shines a light on the history and impact little things can make on energy reduction at scale.

Right now on The Spinoff: Alex Casey has updated her In Plain Sight investigation into the culture of the magazine Pavement. People in the fashion industry have responded to the original story, giving their own experiences of what went on. Tessa Prebble writes about why it’s better to use direct terms like disability, rather than the cringeworthy ‘special needs’. And Helen Taylor writes about a bird sperm race, and how it could save the hihi.

I don’t know what it is about cricket, but writers who cover the sport just love their thinkpieces. Perhaps it’s the endlessly long days and the slow passage of time being integral to the sport. Perhaps it’s the elitism attached to parts of the game’s culture, giving journalists the luxury to indulge in more long form writing. Whatever it is, the last few days of the ball tampering scandal have been an incredible time for cricket journalists to be alive.

This is a story that has everything. Hypocrisy. Arrogance. A backstory. Crime. Punishment. Clear villains, fall guys, and judges. Sport. A remarkable number of angles have come out of it, and readers can’t get enough – as NZ Herald writer Andrew Alderson noted, “yesterday’s Herald analytics show nine of the top 10 viewed stories related to the Australian saga.” The story leaped over the increasingly arbitrary divide between sport and news, particularly when Australian politicians started weighing in.

So with that in mind, here are the three must read pieces about ball tampering, cricket, and why this saga matters.

On intergrity, these takes from Australia hit all the right areas. A lot of people will be wondering why this episode appears to have shaken Australia to its core, Brydon Coverdale has a go at explaining that one. And in the Sydney Morning Herald, Greg Baum says it appears the cultural significance of sport, and how the public expects their representatives to play, is being lost on the team.

And for the real cricket nerds – the purpose of the ball tampering was to obtain ‘reverse swing,’ basically a way for bowlers to move the ball that makes it very difficult to bat against. The story of how reverse swing was first received in England, spiritually the home of the game, is a fascinating tale of innovation, suspicion and triumph, and is told beautifully by Vithushan Ehantharajah in this piece from the archives on The Cricket Monthly.

In sport, we’ve already talked more than enough about cricket in this edition, but just one more quick mention. The Black Caps are one-nil up against England after winning a stirring day-night test match in Auckland. Remarkably, the win was accomplished in effectively three days after rain ruined Friday and Saturday. The NZ Herald has a rundown on the three match defining moments.

Another story that has fallen under the radar amid the avalanche of cricket and rugby, is that the Silver Ferns appear to be in crisis. Newsroom‘s Suzanne McFadden spoke to captain Katrina Grant after their 2nd loss in a row to Jamaica. The horror run of recent results, which includes a quad series loss to England, and a 4-0 drubbing from Australia in the Constellation Cup, comes at a bad time. The Gold Coast Commonwealth Games start next month, and there are fears the Ferns might not make the podium of a tournament they won in 2010.