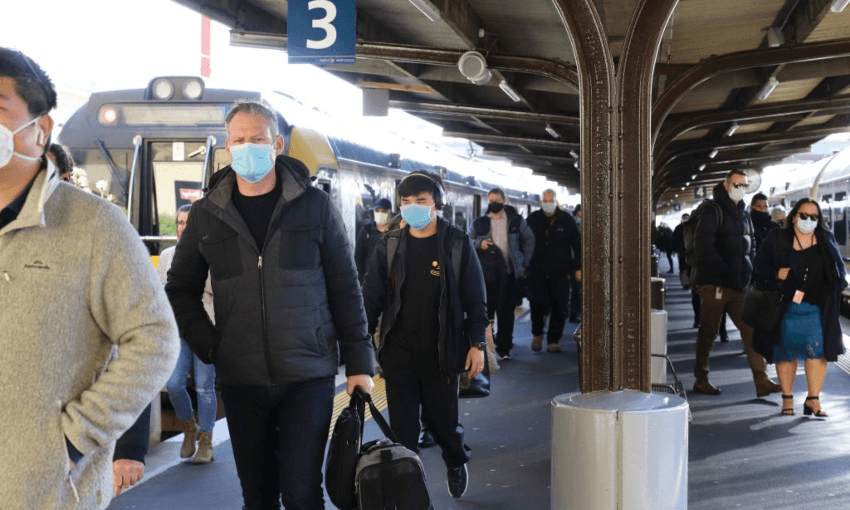 Good morning and welcome to The Bulletin. In today’s edition: Wellington escapes cases so far, government launches new push on hate speech laws, and some hard to recycle plastics being banned.

A couple of significant bits of Covid news came in over the weekend, both relating to the trans-Tasman bubble. First of all, the situation in Wellington: On Sunday, a decision was made to extend level two restrictions (note the wording there – it definitely has not been a lockdown) for another 48 hours. The reason for this is the Sydney traveller’s wife has now also tested positive, indicating a possibility that there are still people in Wellington who were infected who could themselves test positive.

To be clear, no positive cases have been detected up to the present moment. And as always, keeping an eye on the details and instructions on the locations of interest site is vital. But according to the NZ Herald, testing rates in Wellington haven’t been as high as might have been expected, and Covid minister Chris Hipkins is encouraging those who may need one to make it a priority. Newshub reports Otago public health professor Michael Baker has described the extension of level two as justified, while also calling for refinement of the response to make greater use of masks and scanning.

Meanwhile, the travel bubble will be paused with the whole of Australia until at least Tuesday night – and who would bet against longer? It is the first time the bubble with the country as a whole has been paused, with previous suspensions affecting only certain states. Case numbers are escalating in Australia at an alarming rate, and Sydney has now been put into an actual lockdown. As the ABC reported yesterday, there are now cases in almost every Australian state. In terms of the impact that’ll have here, ski field operators are being hit particularly hard – Radio NZ reports there has been a wave of cancellations from Australians who would have otherwise come over.

Public feedback is currently being sought on changes to hate speech laws, and the proposals can be read in full here. Under the proposal, hate speech would become a criminal offence, and penalties would increase. But there are quite legitimate questions to be asked over what constitutes hate speech – at one end of the potential spectrum of bigotry it is clear and obvious, but fairly quickly it gets fairly grey. As an example of that, justice minister Kris Faafoi struggled badly with answers to theoretical questions about what may or may not be covered, in an interview with Tova O’Brien on Newshub Nation.

In a related story around political speech that some find hateful, the Speak up for Women group has won a significant court battle over the right to hold a public meeting in a council building, reports Stuff. Among other issues relating to trans people, SUFW opposes the Births, Deaths, Marriages and Relationships Registration Bill, which would make it easier for trans people to self-identify their gender in government registration. The court found the council’s decision was a breach of SUFW’s rights, and that there was sufficient evidence to conclude SUFW are not a “hate group”.

Some hard to recycle plastic products will be off the shelves within a few years, after a government ban was announced. Radio NZ reports environment minister David Parker estimates it will result in a reduction of two billion plastic items going to landfill every year, addressing the country’s poor record in this area. A fund has also been opened up for businesses to explore alternatives to plastics.

The ombudsman has ruled against the immigration ministry in a claim that could have big implications for international student visas. Newsroom’s Anuja Nadkarni reports it could affect hundreds of people who were found to have been wrongly given shorter visas than what they were eligible for. The problem was caused in part by a mismatch in policy and the information advisors were then giving to would-be international students.

In politics, an astonishing column about the current state of the National party from someone who has seen it up close recently. Janet Wilson was the party’s press secretary for the four months leading up to the last election, and wrote on Stuff that the lessons of that debacle haven’t been learned. She also criticised the “paranoia” she is currently seeing from leader Judith Collins, who has allegedly been making the moves to reward allies and punish enemies. For a contrary view, Newstalk ZB host Heather du Plessis-Allen wrote on the (paywalled) NZ Herald that the knifings in National are long-overdue, and down the line the party will thank Collins for striking the blows.

A truly bizarre political scandal unfolded over the weekend in the UK: Health secretary Matt Hancock has resigned after being caught breaking coronavirus rules – wait for it – when pictures emerged of him having a pash with an aide, reports the BBC. They were right up in each other’s moist breath zone, despite this sort of thing being effectively banned in the UK. On being told that the story was about to break, Hancock immediately rushed home to tell his wife and young child he was leaving them. It all rather puts David Clark’s bike ride and family trip to the beach into perspective.

If like me you’ve had an emotional reaction to the World Test Championship final, we want to hear from you. We’re collecting fan responses for our cricket podcast The Offspin. If you’d like to contribute please make a voice recording of <60 seconds capturing your emotions and joy and send to info@thespinoff.co.nz.

Right now on The Spinoff: Ashley Jones calls for changes to our “archaic” divorce laws to protect women from domestic violence. Public health expert Robert Beaglehole argues a renewed push is needed to reach Smokefree 2025. Justin Latif writes about the calls from Pasifika leaders for the law changes they say should accompany a Dawn Raids apology. Bernard Hickey writes about the ‘partial and pyrrhic’ victory won by urbanists in Wellington – a meeting that Justin Giovannetti was there for. And Paul Gorman gets a rare insight into events in the MetService forecast room ahead of the torrential Canterbury rainstorms.

For a feature today, a story about ultra-wealthy people avoiding tax in the US, with links to New Zealand. ProPublica reports on how billionaires have been able to turn a retirement account – called a Roth – intended to benefit working people into tax-free piggy banks. Among them is Peter Thiel, who was able to purchase New Zealand citizenship despite having no serious connection to the country. Incidentally, kudos to Matt Nippert and the NZ Herald for doing some of the document hounding for their reporting that made this piece possible. Here’s an excerpt:

In 2005, he sought residency in New Zealand, which had become a destination for some ultra-wealthy people who saw it as a safe haven should civilization collapse.

“I have long admired the people, culture, business environment and government of New Zealand, as well as the encouragement which is given to investment, business and trade in New Zealand,” Thiel later wrote in a letter to the country’s government.

Thiel applied as an investor. His application, prepared by his then-financial assistant, Jason Portnoy, touted the size of his Roth. Thiel transferred $749,967 to a bank in New Zealand, keeping it under the umbrella of the Roth. The country, where the “Lord of the Rings” movies were filmed, approved Thiel’s application. The New Zealand Herald later revealed that the country had secretly granted Thiel full citizenship.

In sport, the Warriors have secured the return of fan-favourite Shaun Johnson for next season. Analysing it for the (paywalled) NZ Herald, league writer Michael Burgess puts into context what we can expect. Burgess argues that he won’t be the sole answer for getting the struggling club firing again, but that he will offer significant creativity on attack. The piece also gets into the question of whether he wasn’t good enough last time he left – nonsense, says Burgess.