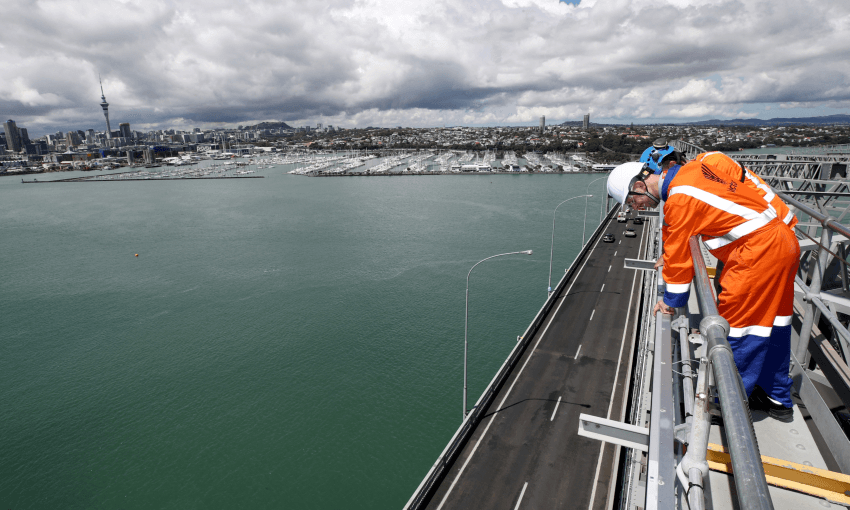 The Harbour Bridge has had a lot of work done. (Photo: Getty.)

Why keeping lines workers safe means turning off your power

By Andre Botha
Guest writer
Made possible by

The Harbour Bridge has had a lot of work done. (Photo: Getty.)

When it comes to safety, sometimes looking back on the past can make you glad you’re alive today, writes Vector’s Chief Networks Officer Andre Botha.

All of these things were once considered perfectly normal: not wearing seat belts; public DDT-spraying trucks (to end Polio, of course); giving the kids a booster seat so they could see out the car window better; smoking on planes;  smoking in pubs; smoking in general. While most people always strive to do what is right when it comes to safety, hindsight about inherent risks can make fools of us all.

In some recently uncovered photos, a member of an Auckland Electric Power Board line crew is seen clearing trees somewhere near Piha. Our best guess is that this was back in the 30s. The image shows one of the crew standing right in amongst the trees, while chopping them down. Note the hi-vis suntan and safety cap.

As time goes on, and as we continue to learn more about the risks around us, we also learn how to manage them better. So while we can see in that photo a number of things we wouldn’t consider safe today – the lack of personal protective equipment (and yes, that does include sunscreen); what seems to be a cavalier attitude to mitigate against falling branches – we can only assume that at the time this crew member was just doing what everyone thought was appropriate and reasonable.

As with any social change, there’s often a period of transition where a previously acceptable activity becomes gradually less so. And adoption follows a bell curve – there are the early adopters, the ‘fast followers’, the majority and the laggards. Society has a role to play in debating what’s considered safe, and revisiting those debates as new technologies or knowledge come to light.

How long do we tolerate people driving their own cars once autonomous vehicle technology gets better than it is now and becomes a force for good?  Are we really going to outlaw smoking altogether by 2025? Should New Zealand follow the UK’s lead and impose a sugar tax?

As a business operating around major electrical hazards, Vector simply cannot be a laggard when it comes to safety. For decades, the internationally accepted practice has been for lines companies like Vector to conduct maintenance on their electricity networks without switching the power off first. Basically, the approach was to prioritise a continuous supply of electricity while continuously managing down the worker safety risks associated with live lines work.

But the fact remained, even with a mature industry and a raft of safety mitigations, the electrical hazard was never fully eliminated, simply because the power stayed on.

Of course, this means the TVs can stay on, the phones can be charged and people can be free to go about enjoying their electricity without interruption. But somewhere along the line, someone was doing some maintenance work on the lines while the power was still flowing. And we’re not talking a jolt from an electric fence; we’re talking maintenance on the high-voltage backbone of Auckland’s power network. That’s some serious voltage. And we’re also not talking about occasional, irregular maintenance. In Auckland alone, this type of work was happening around 140 times a month.

That’s a lot of opportunity for something to go wrong.

So a couple of years ago, Vector made a big decision to stop live-line work wherever possible and shut off power so the electrical hazard was removed altogether. It means that when our crews are called out to deal with say, a car wrapped around a power pole, we drop the power to that local area to minimise risk to crews and public (and any trapped drivers), then restore as much as we can once crews have isolated the part they need to work on.

Doing this represents a shift in thinking around how to manage risk. Whereas before we focused on a combination of engineering, process and equipment solutions to manage down the risk, now we focus on removing it. And if you’re in the know about health and safety, elimination is higher up the food chain in terms of desired approaches.

Vector is one of the first to introduce these changes in managing risks around electricity. We care deeply about safety and keeping our communities and our people safe, always.

Our safety protocols are inevitably leading to longer or more widespread power outages when dealing with incidents, but we believe Aucklanders will agree that ensuring people are as safe as possible is worth a bit of extra time without the telly on.

It’s not just car-crashes or storms blowing over trees either. We have to constantly maintain the network, so we have planned outages to do maintenance on underground power cables, replace power poles or replace overhead conductors or transformers.

While we believe this is ultimately a safer approach, we’re open to feedback and changes for the better as standards progress.

However, I can hand-on-heart say that everything we’re doing now has been considered with safety at the top of mind. I’m confident that when people in the future find photos of today and look back at what we did, they won’t find a lines mechanic up a tree with an axe and no shirt on.