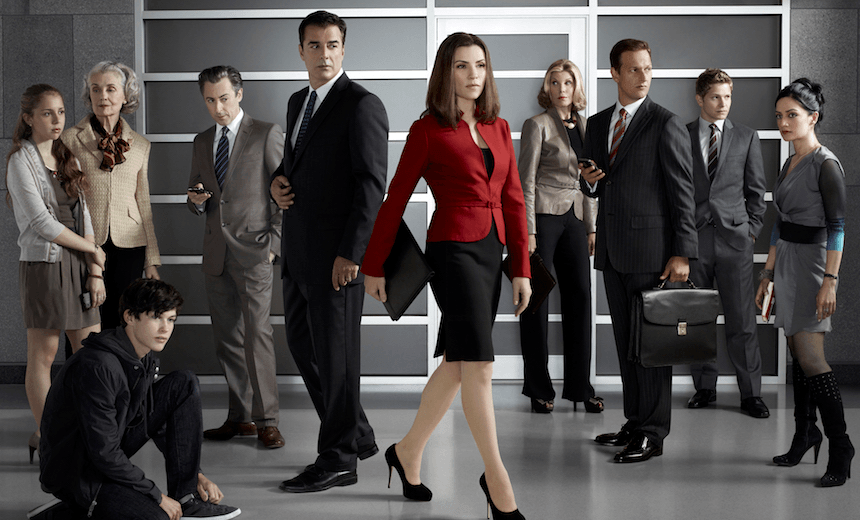 Television: A Field Guide to the Deceptively Addictive Drama of The Good Wife

By Aaron Hawkins
Guest writer
Made possible by

The Good Wife is the best least talked about show on television, says Aaron Hawkins. Considering diving in and lawyering up? Here’s all you need to know.

Alicia Florrick (Julianna Margulies) is married to states’ attorney Peter Florrick (Chris Noth), who gets caught with his pants down and his wallet out in a scandalous cocktail of prostitution and corruption. She stands by her man, though, playing the titular Good Wife. As one of the political operatives summarises early on: “Without her, Peter is a john who overpaid for a prostitute. With her, he’s Kennedy.”

With Peter in prison, Alicia rekindles a long dormant legal career, and a long dormant old flame, when her old college buddy Will Gardner (Josh Charles) takes her on as an associate at Lockhart, Gardner & Stern. She turns out to be a very good lawyer, with the aid of an impossibly good investigator Kalinda Sharma (Archie Panjabi), and her stocks rise accordingly.

At its core, The Good Wife is a case of the week legal procedural, within a broader story arc that explores the character and universe of its central figure. In this sense it isn’t reinventing the wheel, but it is an exceptionally well-tuned vehicle all the same, beautifully managing the shifting weight of the three interwoven chapters.

Who is Saint Alicia?

Alicia Florrick is a resilient combatant, fighting a war on three fronts: her nuclear family meltdown, complete with hard drinking mother (Stockard Channing), and meddlesome Wasp mother-in-law (Mary Beth Peil); the high stakes battle royal of big Chicago law firms; and the ambitious political universe of her estranged husband. If Chris Noth turned out to be the product of an algorithm designing the Perfect Presidential Portrait, I would not be in the least bit surprised.

Julianna Margulies has developed such a sterling centrepiece for the show, and over the span of seven years it’s been engrossing to watch the shading darken and deepen. Starting out as an innocent bystander, she grows from political prop into political actor as the years go by. Faith, romantically and religiously, are notably absent from the beginning, its her relationship with law and legislature that gets complicated.

The evolution of Alicia’s liquor cabinet is a great slow burning metaphor worth keeping an eye on.

What else to look out for …

The show’s ripped-from-the-headlines approach isn’t new, it has guided Law & Order since 1990. What sets The Good Wife apart is the deftness with which they approach the digital age. Chum Hum (the show’s proxy for Google) is a Lockhart/Gardner client. The courtroom drama explores intellectual property battles, drone strikes, crypto-currency and driverless cars. On the home front, Alicia’s teenage daughter is filmed remotely by someone hacking their webcam. Warrantless wiretapping is par for the course.

The surveillance of the NSA is conducted not by shadowy conspirators, but by a pair of goofy college grads with a penchant for screaming goat videos. That balance of lofty and levity is perhaps The Good Wife’s ultimate masterstroke. 22 episodes a year meditating on religious freedoms, surveillance culture, physician-assisted suicide, and rotten democracy would be a grind, and there will only ever be one The Wire.

Writing about tech for television is a dangerous gambit. The missteps are jarring, in a desperate Dad trying to impress his kids way, and the references can date exceptionally quickly. Exhibit A: The hilariously attrocious CSI Cyber. You can’t underestimate how impressive a feat it is that the showrunners fall foul of neither of these. Further, the cut and thrust of the legal drama allows space to debate a lot of these issues in a way that is not only rare in primetime drama, but increasingly so in network current affairs.

Who else do you need to know?

The show is populated by an incredible ensemble cast. With Denny Crane as the notable outlier – I would watch William Shatner read the Yellow Pages – my aversion to Zany Lawyers has held firm since David E Kelley’s woeful Ally McBeal. Here we have proof that they can co-exist, only when used sparingly enough to never lose their lustre. Michael J Fox is brilliant as Louis Canning, a mercenary corporate lawyer who uses his degenerative motor neuron condition to curry sympathy with judges. Elsbeth Tascioni (Carrie Preston) is as mad a snake and deserves her own spin off show equity partner Howard Lymon (Jerry Adler) is as crass as he is ineffectual.

Away from the bench, Colin Sweeney (Dylan Baker) is a wealthy playboy with a habit of his girlfriends ending up dead, and him not ending up in jail. Eli Gold’s kibbutz-and-IDF veteran daughter Marissa (Sarah Steele), and Alicia’s gay stoner maths professor brother Owen (Dallas Roberts), both excel in offering their family what can only be described as acerbic grounding.

Seasons 1-4 are streaming on Lightbox now. Full Disclosure: I cheated with The Good Wife, and I heartily recommend it. Not in the Peter Florrick way, but in that I jumped on board during season three before filling in the blanks later.

The hook, unsurprisingly, was Eli. By this point promoted to the ongoing cast, as Peter’s Chief of Staff, his shrewd scheming and bare knuckle style never sleep. As the show evolves, the Florrick’s marriage transitions to one of JFK and Jackie style convenience, with Eli as the reluctant fulcrum.

Without realising it, I went from listening from afar, to glancing over a shoulder, to planted in front of the screen, to counting down the days. The Good Wife is one of the most addictive shows I have ever seen, and I’m jealous of all who are yet to embark on this journey.

Click below to watch The Good Wife on Lightbox