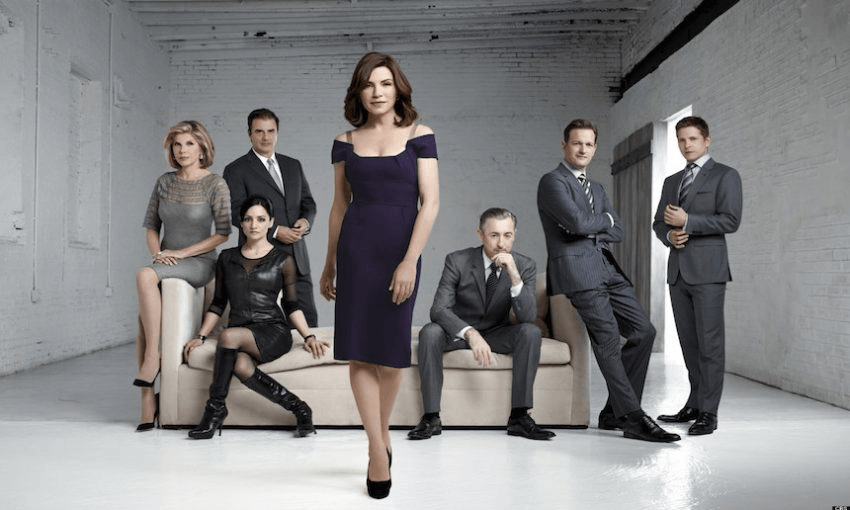 Summer reissue: Why you haven’t watched The Good Wife – and why you absolutely should

The Good Wife is one of those shows that has always seemed to be around but you’ve probably never seen. Sam Brooks tells you why you haven’t watched it yet, and why you should fix that immediately.

At some point in 2016 I decided I was going to watch all of The Good Wife, just as it was wrapping up its seventh season. I wanted to watch a show that had won a lot of acting awards, something where I could sit back and watch people say smart things to each other and not think about it. I’d avoided it for a while, despite being pretty sure I would enjoy it. Sound familiar?

Why you probably haven’t watched The Good Wife

This is a big point of contention for me. The title The Good Wife is about as generic as it gets, and immediately it gets my back up and makes my eyes roll out of their goddamned sockets as I go, “Ugh. Whose idea of a GOOD WIFE? A MAN’s idea? NO THANK YOU.” In fact when I first heard about the show the title made me turn it off immediately, because even if it’s ironic it’s a little bit too cute.

It’s like The Good Wife is the question to which someone smugly replies, probably while swirling around a glass of chardonnay, “But is she really?”

The Good Wife is a legal drama – an honest-to-god, people yelling in courtrooms and typing on computers and making very important phonecalls legal drama. These kinds of shows tend to rise up every few years; one or two manage to hook in and the rest fall into the cancellation pile.

Before this, the last big legal drama would’ve been probably been Boston Legal, in which William Shatner played Mental Illness Drag, James Spader spoke in halting sentences and the plot would stop all the time for people to recite their political points of view, which changed and shifted around according to the episode. By the time it reached it’s 57th season, by my conservative estimate, it had probably run out of political drama – and definitely organic drama –  and it died a quiet death.

So basically if your last experience with the genre is Boston Legal, I can see you avoiding The Good Wife. But you shouldn’t, because where Boston Legal handled its issue with huge hamhands, The Good Wife is a great deal more subtle. If a character has a point of view established in one episode, the show generally remembers where that character would stand on that issue later on in the run. You know, what good drama does.

THE CAST OF THE GOOD WIFE.

There’s 156 episodes of The Good Wife. That’s seven seasons, a clean 120 hours of television to make your way through. By any standard, that’s a lot of hours. It took me about a year to get through the entire show, very rarely binging more than one episode a day. Those 156 episodes can be really bloody daunting, but honestly they fly by. It’s like cleaning your house: if you do just a little bit every day, then your house will be clean by June! (Don’t clean your house like this, you goddamn monster.)

Look, I get it (I don’t, you suck). The Good Wife doesn’t sound like your fantasy dragon-fucking-bro-pumping Game of Thrones (I don’t watch Game of Thrones) or your meth-pashing-needle-pumping Breaking Bad (ditto) or even your zombie-loving The Walking Dead (absolutely ditto) and that’s because it’s not. It’s a show about a woman finding her way after her husband cheats on her and throws her family into a high profile sex scandal; it deals with generally real feelings and somewhat real experiences that line up with our own.

If that doesn’t sound like your thing, and who am I to judge your oxymoronically grimdark escapism, then The Good Wife is probably not your thing.

Why you need to watch The Good Wife

The Good Wife is that rare beast, a network drama (that is, not an HBO/Showtime/Netflix drama) that is genuinely intelligent and gripping. It suffers a little bit from seasonal rot – 22 episodes feels excessive for any drama in our 10-to-13-episode Golden Age of television – but it manages to sustain both long story arcs and case-of-the-week type episodic drama. It’s a structure we don’t see often in buzzed about dramas, because we’ve switched to long narrative season- or even series-long arcs that move at the pace of a parliamentary bill, but it works. It keeps you invested in each episode, and keeps you coming back.

Beyond that, the acting is also surprisingly deep and layered for a network drama. It turns out if you give very good actors some very good material then you’re going to get some very good acting! Julianna Margulies displays a mastery over eyebrow acting, while Archie Panjabi and Christine Baranski bring the skills when it comes to being mean to other people onscreen. It’s always satisfying to watch people be mean in more clever and satisfying ways than you ever could.

If your brand of drama is people having too many feelings and not being able to express them properly because of the rules of society or the ethics of their job, then The Good Wife is the show for you.

JULIANNA MARGULIES AS ALICIA FLORRICK IN THE GOOD WIFE.

2. You can watch it while doing other stuff

Look, this doesn’t sound like a recommendation. But aren’t we tired of having to actually watch the show we put on? Don’t you want to have something to put on while you’re cooking or cleaning or hungover and maybe falling in and out of sleep? The Good Wife is perfect for that. You can drop out for about ten minutes, scramble your eggs, hang up your laundry, pass out in regrets of last night, and then drop back in and not miss that much. Sometimes you need a show like that, and sometimes you need that show to be good.

3. It’s actually good from the start!

This is really important, you guys.

A new rule I’ve implemented with TV is that if it’s not good from the first episode, I’m not going to watch it. There’s way too much TV now to put up with anything that’s not good from the very first second. My time is important. I’m not going to sit through ten episodes of shambling zombies and sad people to get to the point where someone dies or someone lives or whatever happens. There is exactly one show on television that I would recommend sticking out if you’re not into it, and that’s BoJack Horseman.

However! The Good Wife is good from the very first episode, and it never lets up. It throws us straight into the drama: Alicia Florrick’s husband goes to jail for doing stuff with hookers and Alicia Florrick has to start from scratch at a law firm. The first season milks that for all the drama it’s worth, and the subsequent six seasons follow her rise and fall in the world of Chicago law. There’s rarely ever a bad episode, and for the less exciting ones, refer to my second point.

4. It means you can watch the sequel series, The Good Fight

Now, The Good Fight is maybe a worse title than The Good Wife. It has even less of the irony and is not super representative of what the show is actually about. The Good Fight is essentially The Good Wife without the lead character, but with the best character on the show, Diane Lockhart (Christine Baranski) and two other characters played by Cush Jumbo and Rose Leslie, who I understand plays a dragon of some kind on Game of Thrones. It’s a tighter, more condensed version of The Good Wife, and is similarly good, and fulfills my need to see Christine Baranski be mean and correct to people.

Of course you can watch this without watching The Good Wife, but one of the best things about having seen The Good Wife is being able to dig into this smaller, nastier show which responds quite directly and brutally to the politics in Trump’s America.

Good – no, great – news! You can watch six seasons of The Good Wife on Lightbox right now: