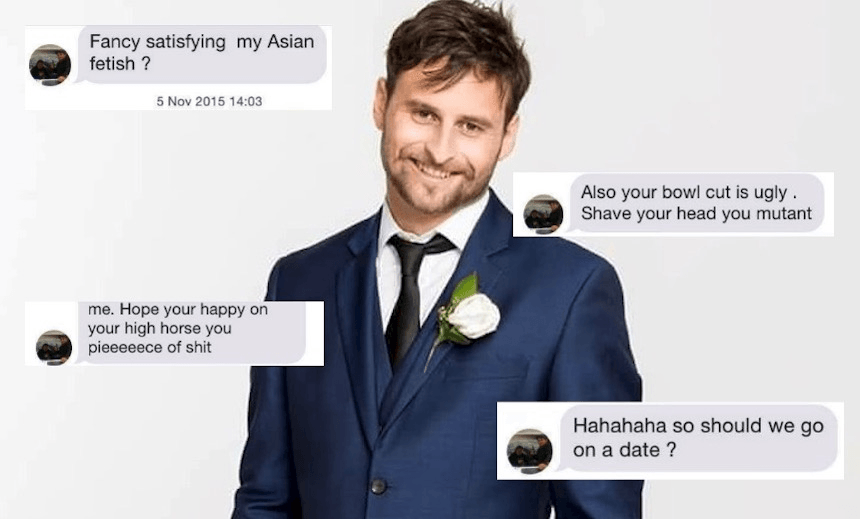 Turns out Andrew from MAFSNZ was an absolute pig on Tinder

Messages leaked to The Spinoff reveal Married at First Sight NZ‘s Andrew Jury sent a series of abusive and racist DMs to another user of the service in 2015.

Andrew Jury, a participant on Married at First Sight NZ, sent abusive messages to a woman on Tinder, calling her a “whore” after she refused his request to “satisfy my Asian fetish.” Jury is one of the few remaining participants on the Mediaworks reality experiment that weds two complete strangers and films the results. It has been a ratings hit for Three, despite all relationships bar one being deeply troubled.

Maria Mo, the recipient of the messages, hadn’t watched Married at First Sight NZ until last night, when Andrew caught her eye during the explosive dinner party reunion. She immediately had a “strong, gut reaction,” claiming his face and name had been “stuck in her head for years” after suffering an unpleasant tirade of “abusive, sexist and racist messages”.

The conversation, sent in September of 2015 on the dating app Tinder, began with a question from Jury, who was 24 at the time. “Fancy satisfying my Asian fetish?” Jury wrote. “That was the first line that he opened with” said Mo, who told The Spinoff she was no stranger to experiencing misogyny and racism on the “cesspool” of Tinder. At the time, she replied “ew, go fuck yourself.”

From there, the exchange escalated. “Go fuck yourself you up right whore,” said Jury. “It’s people like you that are ruining the world with their prudish uptight ways. Plus you’re ugly and will never do better than me.” He signed off, “hope you’re happy on your high horse, you piece of shit.”

Later he returned for one last hurrah. “Also, your bowl cut is ugly. Shave your head you mutant.”

The revelations come as MAFSNZ has taken a stand against online bullying. In recent weeks, Married at First Sight NZ participants Lacey Swanepoel and Bel Clarke spoke out on The Project NZ about receiving death threats and nasty messages online. A status from the MAFSNZ Facebook page outlined a zero-tolerance policy for bullying on their page.

“There is a fine line between having a fair opinion about someone’s actions and making an unfair judgement against their character or physical appearance,” it reads. “We ask you all to remember that these incredibly brave 12 faces are humans with feelings and do not deserve any form of bullying or harassment.”

Jury, who was first introduced as ‘The Party Boy’ on Married at First Sight NZ, married Vicky in episode two of the series. Like many pairings on the show, their relationship has remained lacklustre, hitting hurdles after it was revealed that Vicky had been messaging Haydn, another participant in the experiment.

At the time, Mo responded to the message with “thanks for the best laugh I’ve had in ages” to deflect, but maintains the abusive messages made an impact. “First you treat me like some sex toy plaything, then you rip into me?” she says now. “Who talks to people like that?” She says she hopes that people realise the divide between their online and real-life selves does not exist, and that people should be held accountable for their behaviour no matter where it happens.

“He may have thought he could throw these comments away on some chick online… and look what happened.”

Now, two years later, Mo has some advice for Jury. “Online is not separate to real life… be the person your dog thinks you are.” Or, in Jury’s instance, the person his pig thinks he is.

Jury responds via Mediaworks: It has come to my attention that you have received some rather nasty messages on a Tinder exchange I had with someone two years ago.  I’m so embarrassed and ashamed. I would take it back if I could, but as I deleted my all dating apps ages ago I can’t apologise to the individual in person.

I hope everyone can forgive and forget as I’m a new man these days.

The series continues tonight at 7.30pm. Click here for more Married at First Sight NZ coverage, or listen to our weekly reality TV podcast The Real Pod below: