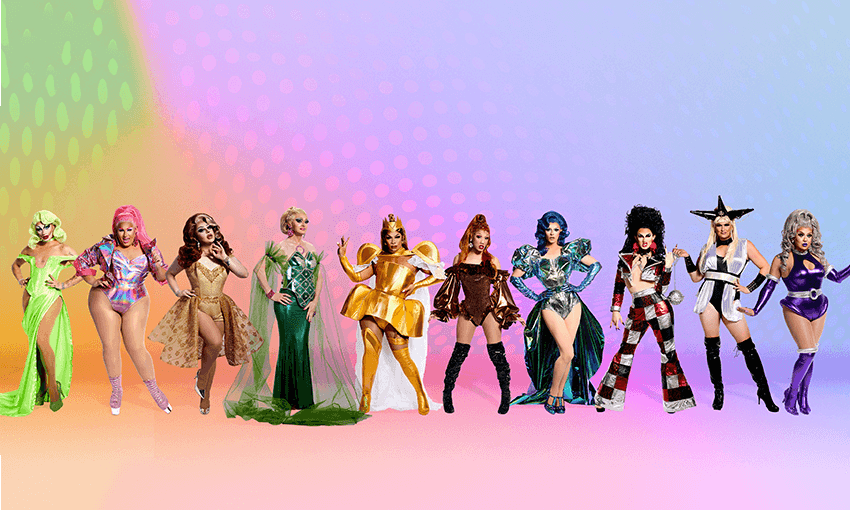 The contestants of RuPaul’s Drag Race Down Under season two. (Photo: Supplied)

The contestants of RuPaul’s Drag Race Down Under season two. (Photo: Supplied)

Buckle up, Aotearoa! These are the 10 new drag artists coming to the new season of RuPaul’s Drag Race Down Under.

Has it really been a whole year since Kita Mean grabbed the crown of Drag Race Superstar? Apparently so, because we’ve got a second season of RuPaul’s Drag Race Down Under starting on July 30, featuring 10 new performers competing to snatch the title of Down Under’s Drag Superstar. Here’s who’ll be sashaying onto our screens this month.

Regardless of how far Aubrey Haive goes this season, she’s already won the title of the best name. Although currently based in Melbourne, I’m happy to claim Aubrey as a New Zealand queen as she was born in our very own Timaru. She’s quite new to drag, only starting in 2020, but that’s never stopped a queen from clawing her way to the top before. As her namesake would say: “Yeah, baby, yeah!”

There’s always gotta be a burlesque queen in a season, and Beverly Kills is here to provide. The Brisbane-based queen has a weekly residency at one of Australia’s most renowned nightclubs, and will be bringing her skills with whipping and maybe even fire breathing to the competition! Let’s hope the crew have their fire safety certificates on hand.

According to the press release, Faúx is the self-confessed “loudest queen” which is a very, very bold claim. At any rate, she’s a regular face in the Sydney drag scene, and has been running her popular weekly IGTV (remember IGTV) show Faux Mondays, where she platforms not just fellow queens but other members of the queer community.

To misquote Sir Mix-A-Lot: “My Hannah Conda do!” The Sydney-based queen’s claim to fame, other than being generally excellent, is co-founding Drag Storytime in 2016, an initiative where drag queens read to young children, helping to educate them about inclusion, acceptance and love. To correctly quote RuPaul: “Can I get an amen?”

A South Auckland-born queen, we love to see it! Kween Kong is known for her powerhouse performances in Adelaide, and is a renowned dancer and choreographer within her community, touring frequently with the Australian Dance Theatre. But you bet I’m claiming her as a New Zealand queen as well.

A close runner-up for best drag name, Minnie Cooper (no relation to Minnie Driver) is a genuine queen among queens. Her career has spanned over 20 years, entertaining audiences across the world, and she’s won more DIVAs (Drag Industry Variety Awards) than any other drag artist in Australia, taking home Entertainer of the Year four times! One to watch.

Molly Poppinz, who I presume is close to practically perfect in every way, made her name in Vancouver, and only recently returned to Newcastle after three years in Celine Dion’s home country. She hails from the Haus of Popperz, which probably explains her name.

In an exciting move for the series, and a clear step away from the fairly homogenous looking first season, Pomara Fifth represents both First Nation Australia and Māori queens, and has been doing drag for eight years now. I expect nothing less

A House of Drag alum rears their head once more! Jackzon was, of course, the winner of season two of the TVNZ+ show, and brings not just that but 15 years of experience in the drag scene to the show. She’s currently the official host and roving reporter of the Wellington International Pride Parade, and brings drag to small towns across the nation.

Now this is one I’m excited for. Based on word of mouth alone, I know Yuri Guaii to be one of the best queens on the Auckland drag scene, with makeup and sewing skills to die for. Last season had a distinct lack of spook, so I’m very keen to see what Guaii can bring to the franchise here.

RuPaul’s Drag Race Down Under S2 premieres on July 30 on TVNZ+.