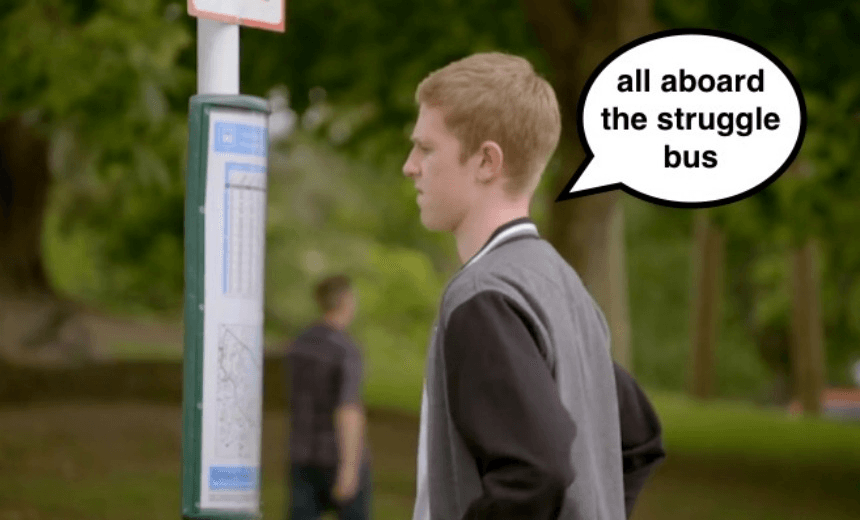 How sure are we that Finn is Chris’ son? I’m talking tangible DNA evidence, earlobe comparison, or proof they both sneeze in the sun, because I have a world-shattering theory: Finn’s dad is actually ’90s hot potato Brandon Walsh. Turn up your t-shirt sleeves and tighten your high-waisted jeans as we consider thi mind-blowing prospect.

Brandon and Finn both rock a vertical fringe, they drive the same car, and they’re both shit at reversing.

Finn is a triplet and Brandon is a twin, and science (aka Google) tells me multiple births run in families. Lastly, Finn’s mother Carrie – sounds a lot like Cindy, just saying – was pregnant in the early ’90s just as Brandon Walsh was at his most fecund. Some people call that coincidence – I call it DESTINY.

If you still don’t believe me, THEIR EARLOBES ARE 100% IDENTICAL.

2) George is in desperate need of medical attention

Not only is George a fake doctor, he’s a really crap one. He confuses milligrams with kilograms and paracetamol with penicillin, but what’s the worst that could happen? A patient dies, you download another fake qualification from the internet, life goes on. Or not, depending on how qualified your own doctor is. Who knows how far the rabbit hole goes.

Leo’s arrival puts George’s knickers in a tighter knot than his man bun, reducing the blood flow to his brain while making it increasingly difficult to walk in a straight line. This addled state might explain George’s long list of medical errors – or is it Leo’s terrible accent that makes George tremble like a bladder on a stick? Whatever, just don’t leave a mess for the nurses to clean up.

Next week: Harry tries to borrow a book from the library #warnerproblems

It’s a shame Harper didn’t check Victoria’s hearing when she gave her a pregnancy test. Harper explicitly said the result was negative, yet Victoria practically announced the pregnancy over the hospital intercom and declared her back pain to be early-onset labour. It’s been at least 10 seconds since you got the result, Victoria. Pack that hospital bag, chuck on an Enya CD, and demand an epidural, stat.

Bella seems to have a brown paper bag and takeaway coffee cup permanently attached to her hands. It’s a miracle Boyd survived this far, given that he rarely ate or saw natural light before he and Bella hooked up.

What does Melissa the Ghost think about Bella slipping into the role of Boyd’s handmaiden? And why doesn’t Boyd just 3D print himself a sandwich? Or a wife? While we think on it, somebody get me a filled roll and a flat white, ta.

6) Virginia, for no reason other than this face

Gordon Bennett, I can’t Adam and Eve it. Leo’s only been in the gaff for five minutes and he’s already trying to get Lucy’s Adam Whiskers down the apples and pears. This geezer is Barney Rubble and the sooner George gives him the bees and honey to sling his hook, the better, innit.

8) Drew is the Jordan Mauger of Ferndale

Drew is a square peg trying to squeeze into a round hole filled with two beautiful women. Which one should he choose? Bianca is a hot bird he picked up in the IV, Harper is a classy lady who won’t let him eat potato chips on a picnic. One wants to stay overnight in the fantasy suite, the other one wants to go home and floss her teeth.

9) True love is the winner on the day

Somebody get these two a room before I vomit all over that spunky new under-bar wallpaper.