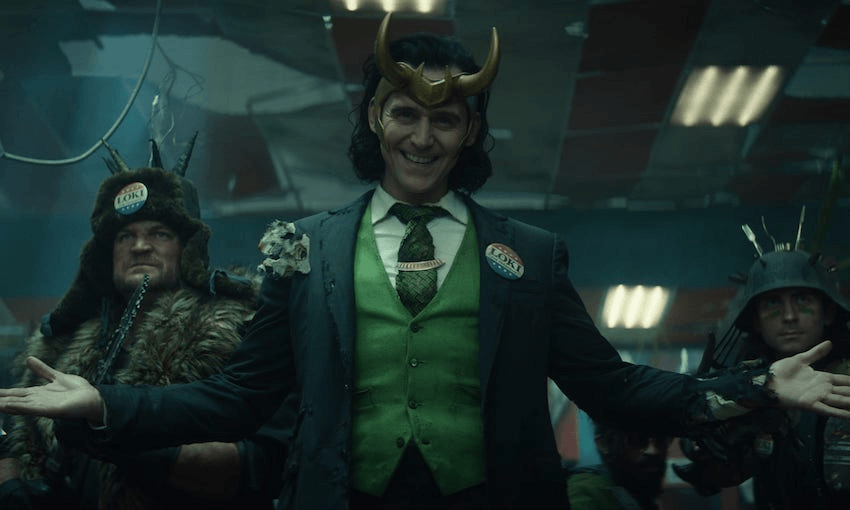 Tom Hiddleston stars as Loki in the new Disney+ series, but it’s not the Loki we know and love. (Photo: Disney)

Tom Hiddleston stars as Loki in the new Disney+ series, but it’s not the Loki we know and love. (Photo: Disney)

The third Marvel series to arrive on Disney+ tries to spin too many plates and loses what makes its anti-hero special, writes Sam Brooks.

The television output of the Marvel Cinematic Universe has been, on the whole, surprisingly impressive. WandaVision garnered critical acclaim for injecting new life and style into the franchise, while The Falcon and the Winter Soldier managed to be a pretty great action series. Neither was as experimental or as groundbreaking as they seemed to be at the start; WandaVision ditched the sitcom premise for its last few episodes and ended with yet another expensive laser show between two overqualified actors, while Falcon tied itself into knots trying to give the impression of making a political statement without actually making one. Both have worth though, even if it’s just letting talented actors like Elisabeth Olsen and Anthony Mackie stretch their acting muscles in roles they’ve had for nearly a decade.

Loki is the third of five MCU series set to come out on Disney+ this year, and is intended as a bridge between Phase Three and Phase Four (and if that means anything to you, congratulations, you’re a nerd). It picks up with the villainous Loki (Tom Hiddleston), the self-declared God of Mischief and brother to Avenger Thor, after he managed to jump out of his own timeline in Avengers: Endgame and ended up… somewhere.

That somewhere turns out to be the Time Variance Authority (TVA), an organisation which exists outside the bounds of time and space, with an objective to pursue and eliminate threats to the established timeline. And now Loki is one of those threats. He’s given a choice by Mobius M. Mobius (Owen Wilson, somehow): be erased from existence, or help to fix the timeline he has now messed up; he picks the latter.

From the jump, Loki is on pretty shaky territory. Both WandaVision and Falcon were extensions of the MCU; they tied back into the trauma of their protagonists and experiences we’d seen before. Loki, in contrast, reframes its main character’s past entirely. After being an out-and-out villain in previous films, he now  has to reckon with what he’s done, including but not limited to enabling an invasion of Earth, patricide, and constantly betraying pretty much everybody in his life. Not only that, but, he has to actually atone for his crimes. It sounds like a fascinating premise for a show, but there’s one big problem: That’s not the Loki the audience knows and loves.

With Loki, creator Michael Waldron (a former Rick and Morty writer, and writer of the upcoming Doctor Strange 2) and first season director Kate Herron (whose biggest directorial credits thus far include four episodes of Sex Education) are in the unfortunate position of having to spin a whole lot of precarious plates at the same time. The show needs to introduce the audience to the new setting; a bizarre office out of place and time, with a team that goes on missions that, in the first two episodes, range from the destruction of Pompeii to a renaissance fair to a superstore in the near future. It also has to find its tone, relying heavily on a terse comedic style that seems to want to be drier and darker than is allowed by the Marvel powers-that-be (who apparently remain deeply in the thrall of Joss Whedon’s trademark patter). That’s a lot for a series to establish right off the bat, even before it gets to its main challenge: Loki himself.

Loki the show has to reframe, and essentially rewrite, Loki the character, and Tom Hiddleston’s performance of him. Loki was a highlight of those early Avengers movies because Hiddleston got to go up against the often painful earnestness of the heroes. His was a tempering presence; his eyes lighting up and his nostrils flaring with each punchline and each twist taking the wind out of their superpowered sails. It was a tremendously self-aware performance; Loki knows he’s the villain, and he goddamned enjoys it.

Now, Hiddleston has to essentially drop what made the character fun, and instead play up Loki’s  previously unseen depths. It’s made quite clear, quite quickly, that those depths weren’t unseen because they hadn’t been delved into, but because they’re just… not in the MCU’s conception of the character. To make up for that absence, Hiddleston is stuck earnestly delivering lines like, “No one bad is ever truly bad and no one good is ever truly good”, which sounds like something even JK Rowling wouldn’t let Dumbledore say in a first draft. Loki atones with platitudes, apparently, not actions. Even worse, the show puts him in the front seat, serving neither character nor actor. Both Loki and Hiddleston are best when they’re volleying conversational serves with the MCU stars, gleefully smashing lines back and forth over the net. Here, he’s the star himself, and is instead asked to exchange earnest lobs of dialogue with an uncharacteristically limp Owen Wilson.

At least in the first two episodes, the series bends over backwards to humanise and forgive Loki, despite him being a genuine menace to society and existence for almost all of his time in the MCU thus far. It’s not hard to draw a line between Cruella, Disney’s latest film to Freudify a sympathetic backstory out of a villain, and this show. Neither Cruella nor Loki trust their character (or the actor playing them) to hold our interest while they do awful things, so they’re constantly reminding us that they’re humans just like us. Except they’re not! Loki is a villainous god, Cruella is a fashion designer with a fur fetish. Let him destroy worlds, let her skin puppies! We have to want to watch them, not have brunch with them. Loki doesn’t just seem to forget what makes its protagonist interesting, but what makes characters interesting at all. A villain atoning does not make for compelling TV. You know what does? A villain being a villain.

The most damning thing that can be said about Loki is that it starts with a question mark, and more questions emerge the longer you watch it. What does this add to the Marvel Cinematic Universe? Why is this show important or necessary at this moment? And finally, why the hell would you do your best villain, and one of the best actors in your entire franchise, dirty like that?

The first episode of Loki drops on Disney+ tonight, and weekly thereafter.