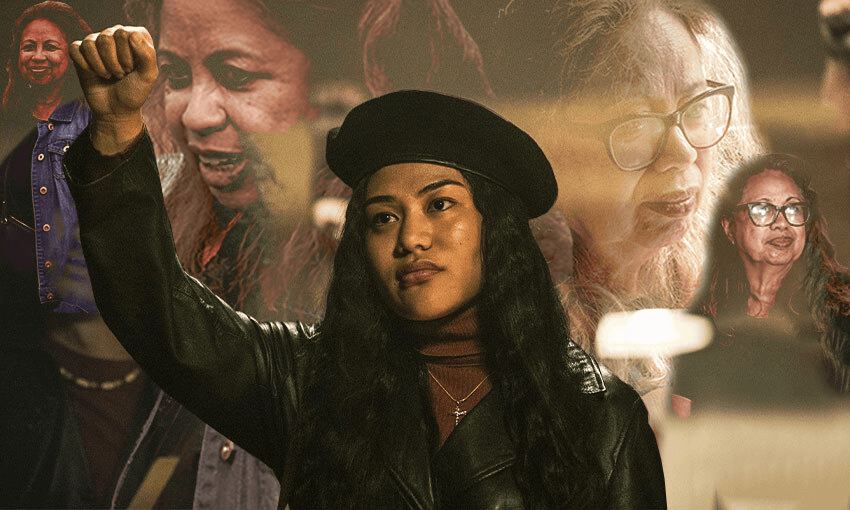 Madeleine Chapman talks to Polynesian Panther Dr Melani Anae, and to the woman who plays her in a new TVNZ series.

From centre stage at Auckland Town Hall, the prime minister apologised in te reo Māori, Sāmoan, Tongan and English for the dawn raids, early morning police raids to deport Pacific overstayers in the 70s and 80s. To her left sat a selection of Pacifc and Māori Labour MPs, in support of the apology. And to her right, receiving the apology on behalf of their Pacific community, the instantly recognisable black berets of the Polynesian Panthers. One of them belonged to Dr Melani Anae, a founding member of the Polynesian Panthers in 1971 and now a senior lecturer in Pacific Studies at the University of Auckland.

The apology was years in the making, and a timely commemoration of the work spearheaded by a group of central Auckland teenagers 50 years ago. The Polynesian Panthers story has received more coverage in 2021 than it has in decades, with short documentaries, features, and exhibitions detailing the racist police practices and the responsive efforts to assist Pacific migrants. The Panthers, a six-part TV drama documenting the early years of the movement, is the latest. Anae is a key character, one of the first Panther sisters, who was just 17 years old at the time.

The journey to seeing the Panthers’ story told in this way has been years-long, but she never had a doubt it would happen. “I made a pact that my job was to write the books and Will [‘Ilolahia]l was going to make the movie,” she says. Anae wrote the book Polynesian Panthers in 2006 but it took 14 years for the story to be filmed. “This has been a culmination of many, many years. Now that it’s here, it’s unbelievable but in a good way.”

The Panthers follows early leaders of the movement – Will ‘Ilolahia, Tigilau Ness, Anae – as they find their place in a city that doesn’t seem to want them. A key sister in the Panthers movement, Anae’s presence within the show is a stabiliser and moral backbone, despite her young age. Lealani Siaosi, in her debut acting performance, grounds Anae as a reluctant matriarch and leader in a movement that would shape the Pacific community’s place in Aotearoa for decades to come.

Lealani Siaosi: I was actually a producer’s assistant… so I was at all the table reads and the auditions and I was always skipping ahead to Melani’s bit because I thought she was the most interesting. I didn’t care about the boys. I felt so compelled, I really resonated with her so I asked [co-creator] Tom [Hern] if I could audition and he said ‘yeah!’

I was completely brand new. The only acting thing I’d ever done was back in year 11 in high school. It was a workshop with Miriama Smith and she just said “acting is just a toolbox, you just pull from your memories and your emotions and that’s how you act, it’s just reacting”. So I was like wow, I have Melani in my toolbox. There’s a lot of things there. So I told Tom that and he was like, go for it, go for it. You’ll regret it if you don’t.

[Auditioning] was the worst because we were literally holding the auditions at my workspace and so Tom would be like ‘okay go to your audition now’ and I’d be like ‘OK bye’ and I just remember my first callback I did terrible because I was so nervous and I had [series producer] Crystal Vaega in there who was like my boss, so that was weird. I remember after that audition I cried to Crystal in her room, I was like ‘please pull my audition because I did so bad, I’m so embarrassed, I don’t want Tom and [co-creatori] Nua [Finau] to see it’ and she was like ‘no I can’t, sorry’. But then I got the second callback and Tom was in the room for that one and he’s just so good at directing. He just knows how to get something out of you.

Anae: We saw the scripts but they were changing a lot. I just went and looked at all the Melani bits [laughs] and they looked fine to me. In fact I thought wow that’s pretty bang on actually. We saw the two hot favourites to play the part. So it was Lealani and one other. It was really hard but I saw me more in you [Lealani] but the other one, she had something too that was different. But I didn’t have the last say but I’m glad it was Lani that got the role because after meeting her…man, we had so many synergies.

Siaosi: A big thing for us is our mums passing. That’s where we really bonded with each other. And both our nanas passed as well. We were the girls of the family, we were pushed by our dads to serve our family but we were also pushed to be academics as well. Then tiny things that we talked about like how we’re both Capricorns, we’re both nicknamed Lani, and we both stopped at grade five in piano.

Anae: We didn’t have to see each other a lot because the couple of times we saw each other, we just clicked. I just found talking with her, sharing and laughing and saying ‘Lani wasn’t a goodie girl all the time, OK?’ We just got it. I felt confident that she was playing me.

Anae: It was hard because she was in tears just about the whole day. The scene that really got to me in the sitting room, it just took me right back to when I was doing that in our sitting room at home. It was so moving. It was just so close to home and that’s what I liked about it. I respected it because every Sāmoan on the planet will relate to it, it was that close to all of us, knowing that moment when you’re in the sitting room saying the loku.

Siaosi: I felt no pressure because I just felt like I was back there. The loku scene, that was something my family and I used to do all the time. We’d sit together, it was always my role to start the song, but when my mum passed and my nana passed, we never sat around for a loku ever again. So that was the first time I’d ever been in that situation for like… my mum passed when I was six and I’m 22 now so that’s a long time. And I think in the final take that they used where I was crying, that was unscripted. I was just so emotionally and mentally drained by that point, it was just too real.

On the blurring of fact and fiction

Anae: It’s that fine balance between activism and being Sāmoan and Pacific which was the crux of the whole thing and our journey through that was important. I tried to instil with Tom, can it have that balance of the cultural with the activist stuff that we were doing as well. Because you can’t divorce one from the other. It was the interaction of the two that made us do what we did.

We know that there’s going to be some artistic licence so that worried me a bit but having read the scripts, at least on my character, I felt OK there. There were a few things that weren’t true in terms of my character: I think there’s a part in there about my father and brother in factories that’s not true, but I didn’t mind it because as long as the heart of the story was there of what we did.

Siaosi: When I read the scripts it seemed a bit like Melani was naggy but that wasn’t the case at all. Melani’s there to fasa’o, which means to realign. So I really wanted to get that across. Melani’s not naggy, Melani’s not this whiny female, she’s the backbone. For me, that was really important, to make sure that Melani comes off as a real strong character, not just like a plot filler.

Siaosi: I didn’t know about [the Polynesian Panthers] until first year uni, and that was only the dawn raids. I think what we’ve learned about them, it almost makes them seem like they’re anti-police, or anti-white people. They were never like that, they were just for the people. They did so many other things, like the prison visits and the food banks, that no one really knows about. So getting to hear those stories firsthand, I was really fortunate to have that.

I did a speech on racial stereotypes back in high school and even that got backlash, because I won it. My mates were like ‘of course you did, you pulled the Islander card’. So for me that was enough to be like, OK I’m not going to try fight anymore. So for Melani to do what she was doing at [that age], that’s insane to me.

Anae: When we go into the schools we say “All the 17 year olds, stand up. We were your age when we did what we did.” It really inspires them. They’re just hungry for this kind of history, a history of their place. We went to a school in South Auckland where the head girl and boy had not heard of the dawn raids or Polynesian Panthers. I couldn’t believe it. But that’s the extent to which that knowledge, that history, has been kept silent.