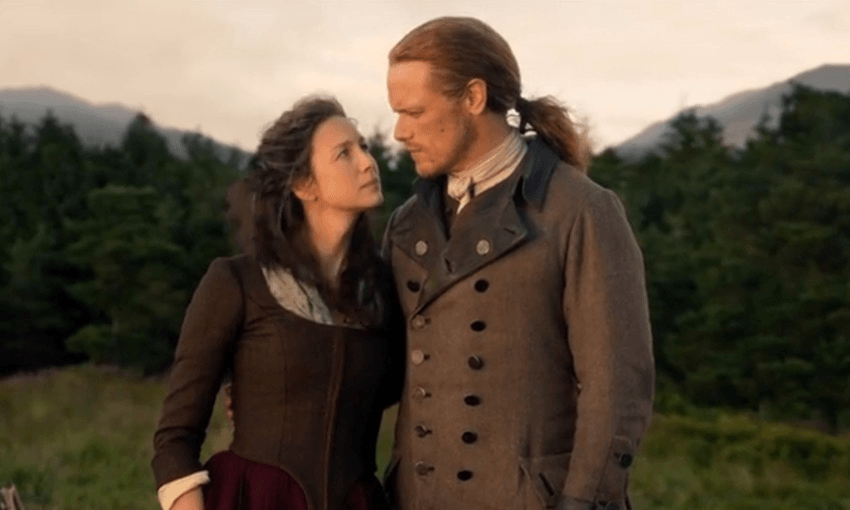 Droughtlander is done for another year, and while we might be shrivelled husks of our former selves, the first episode of our favourite time-travelling drama quenched our thirst with a ginger tsunami of feelings. We are restored. We are reborn. We are human sponges, ready to soak up every globule of Fraser emotional juice that runs our way during the next three months.

Thankfully this episode had juices aplenty, especially during the extended sexy-time montage. North Carolina has been colonised by a bunch of hornbags, and nothing gets them fruitier than a wedding in front of macrame backdrop. Jamie and Claire were at it, Bree and Roger were at it, Jocasta and Murtagh got it on in the Idiot Hut II. Even the pigs were probably rutting their porky little hearts out, because nothing makes the Fraser clan happier than being together and celebrating how good their lives are now.

I mean, just look at that fine macrame curtain. If this work of art doesn’t give you good vibes, please go straight through the stones. Do not pass Go, do not collect $200, there is nothing for you in this time or the next.

But do not pass by Jamie’s new wig, to which we must pledge our loyalty by the light of a giant bonfire. If I were a chef, I would raise my fingers to my lips and make a “mwah” sound about this hairpiece. If I were a time-travelling historian who once dug my way out of a hut with a spoon, I would strum a tiny guitar and serenade it. Maybe Claire gives doe eyes to Jamie because she loves him like a hot potato, maybe she just rates his new ponytail. Jamie Fraser’s hair is finally perfect, which is a gift worthy of a sex montage of old people doing it in a shed and some unexpected close-ups of Roger’s naked bum.

Everyone in America was welcome at Bree and Roger’s wedding, especially Governor Tryon, who came to put a rocket up Jamie’s arse about finding that naughty Murtagh. Jamie was all “chillax GT, have a drink and impress me with your finest tongue-twister”, but Tryon was having none of it. He ordered Jamie to track down and kill the insurgent Murtagh, or everything Jamie loved (house, land, hair) would disappear. Such a party pooper.

Speaking of poop, “I slit the sheet the sheet I shit on” is one hell of a tongue twister. If you weren’t playing that drinking game at your wedding, are you even married? Slit the sheet, shit the bed, who cares what they were actually saying, that one’s going straight to the pool/poo room.

But Jamie had more than slit sheets on his mind. His new house wasn’t finished, Stephen Bonnet wasn’t dead, and now he had to tell Murtagh to GTFO of North Carolina. Jamie cried (human sponges, assemble) because Murtagh had looked after him since his mother died when Murtagh kept saying “she’s GONE” just to make sure Jamie knew his mother was really dead. She’s gone and now Murtagh’s gone and slit the sheet. It was not a good day for anyone.

Roger was also having a sheet time, after Jocasta announced she was leaving her entire estate to wee Jemmy. It was a test for Roger, because cunning Jocasta wants to know if she can trust a knickerbocker-loving Protestant who might be raising another man’s son. I missed the finer points of her argument, but I do know that Roger telling Jocasta to “cram it up your hole” was the best part. Cram it up your hole! It was the wedding night sexy-time montage, all over again.

While Claire sorted out the tonsils of Fraser’s Ridge, Jamie delivered his version of  “cram it up your hole, Tryon”, but with flames and peer pressure. He put on his kilt and gave a rousing speech that made men kneel at his feet and pledge to stand by his side, whatever happens. War is coming, and Jamie needs to gather his allies around him like he’s planning a Tupperware party and he has to confirm numbers so he can get the attendee bonus and a free set of collapsable bowls.

I give you my word, Jamie Fraser. I pledge you my loyalty. I will watch all 12 episodes of this season, and I will recap every important moment, especially the ones featuring exploding hernias, hat-eating pigs and runaway donkeys. I will stand by your hand and I will cram it up your hole, forever and ever, Amen.

The fifth season of Outlander drops weekly on Lightbox every Monday.