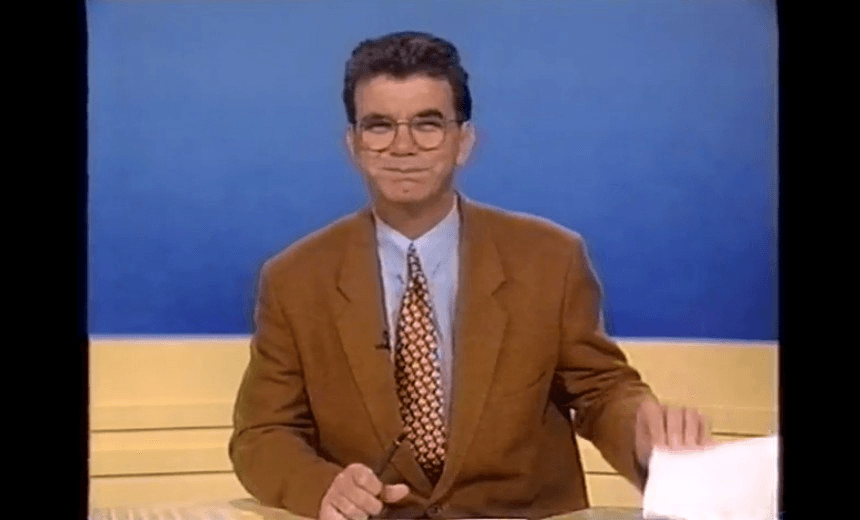 Yesterday afternoon three legends of news had lunch at (where else?) Prego. The Herald‘s former editor-in-chief Tim Murphy and ex-Mediaworks’ head of news Mark Jennings interrogated ’90s news icon Bill Ralston about his run for Council. Ahead of our publication of Murphy’s account of the lunch, Jennings remembers the glory days of his former colleague.

Bill and I have history.

It began in Wellington 26 years ago, not long after TV3 had gone on air. Bill Ralston was a gun reporter on A Current Affair – a show that was meant to kick the butt of an upstart called Paul Holmes. I was Bureau Chief and cut a chunk out of Bill’s story (the polite term is editing) to get it down to the required duration.

Bill took a dim view of this, and made a subtle point by hurling a telephone across the newsroom. This didn’t make much of an impression on me – I had seen far worse in the Australian newsrooms I’d worked in. But it did impress the young reporters in Wellington. All newsrooms want legends. Would ‘Billy the Kid’ or ‘Wild Bill Ralston’ be theirs? Bill’s arrival the next day was eagerly awaited – what would happen?

Bill reserved his legendary status for a later show called Nightline and got on with some good reporting. He helped others be good reporters too. John Campbell credits Ralston for teaching him the art of political reporting.

When I later moved to Auckland to take the Head of News job, Bill was hosting the Ralston Group. It was a crazy show where people sat round a coffin-shaped coffee table and yelled at each other, and it helped shape TV3’s DNA. The network was loose, fun and slightly dangerous.

Bill became a bit more dangerous when he went on Nightline and mercilessly lampooned politicians, including the PM of the time, Jim Bolger. New Zealand could have had its very own John Oliver or Jon Stewart – but we were all too dumb to recognise what we had in this unique talent. Instead, Bill wandered off to be Editor of Metro.

About this time Bill took up a new hobby called “Criticise TVNZ at every opportunity”. It could only happen in New Zealand but nek minnit Bill was Head of TVNZ News. This was a serious shock, but a bigger one was coming. When Prime poached Paul Holmes, Bill kindly suggested to then-Prime CEO Chris Taylor: “I’d be shooting myself. I’d be pouring petrol over myself and throwing myself off Auckland’s tallest building”. Wild Bill was back!

At our Prego lunch Ralston described these as the Golden days of TV. “We had budgets, we could actually do stuff “. But it is no surprise he wants to head back to the political arena – it’s in his blood.

While he rules out (for now) running for Mayor, Bill knows that Phil Goff and Victoria Crone will probably bore the pants off us. He doesn’t quite fit Tim Murphy’s claim of being Auckland’s equivalent of London’s Boris Johnson – but he is the closest we have.

When the cameras roll and the iPhones blink ‘recording’, Bill knows what is going to make the news. He also has what he once hoped to install in TVNZ’s benign reporters – a bit of mongrel. “I spent 30 years holding politicians and the bureaucracy to account… I trained myself to cope with confrontation on television.”

This is code for “I don’t take any crap.”

Any bumblers in the beehive will be on his radar if he is fighting Auckland’s corner.

There is also a softer side to Ralston these days, although I saw plenty of it at TV3 too. The underdog invariably drew his support. If someone was down on their luck, Bill would help them. One senses he will do the same for his prospective constituents in Waitemata. If his supporters were erecting an old fashioned billboards instead of sending emails and DMs they would probably say:

“Bill Ralston – a tough guy with a big heart.”