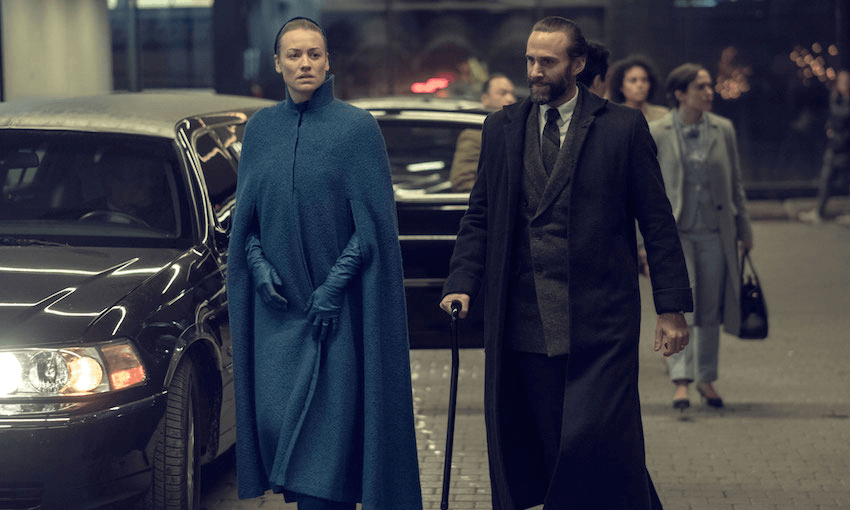 Welcome back to Gilead, where last week’s memories of June and Serena eating croissants and listening to Lionel Ritchie records together are but crumbs in the dystopian toaster of our lives. Tara Ward recaps episode 9.

This week we begin our journey into the hellfires of patriarchy with June counting her blessings (mostly: a chair) while Serena counts the toll of the grey mould of misery that’s killing nearly everything around her.

I’m worried about Serena. She’d rather hang out with dead plants than visit Canada with her husband, and you know things are bad when someone prefers the living hell that is Gilead over the paradise that gave us Anne Shirley and Jason Priestley.

But there’s an opening for diplomacy with the Canadians, and Fred needs Serena to show everyone what a ‘strong Gilead wife’ looks like. The rumour is that Gilead women are oppressed and voiceless, and Fred orders Serena to silently show Canada how wrong they are.

Canada, O Canada, where even the greenhouses drip with the sweet, sweet sap of freedom. The Commander has high hopes for his visit, including showing off his French language skills (whatever he says probably translates to “I am bin juice”) and reviving Gilead’s tourist industry. Bloody great idea Fred, the opportunities are endless. Wander through our radioactive wastelands! Take a tour through our handmaid training facilities! Learn to use a cattle prod in five seconds! Cool story bro, keep talking in those tongues.

Also, when did we start feeling sympathy for Serena? She only came to Canada to enjoy a sneaky glass of Riesling and stare at people using cell phones, now she’s listening to the American government prattle on about helping her escape to Honolulu. Hawaii’s cool, the men are fertile and best of all, Serena could tell her own story in her own words. Praise be and may the Lord open another bottle of wine, because this is a tempting offer for a woman whose Canadian itinerary was made entirely from clip art.

Back in the tourist mecca of Gilead, June is heavily pregnant (or as Janine puts it, “boom! someone’s just sitting on top of your vagina”) and reeling from the news Serena wants her gone as soon as she gives birth. June scrambles to find someone to protect the child in her absence, but her fairy godmother options are lousy. Rita agrees to do what she can, while Aunt Lydia promises to never let anything happen to a baby. I’d suggest June shouldn’t trust someone who literally chains women to the stove, but these are desperate times.

“There you go,” June tells her unborn child, “I got you someone”. Could June please get me someone too, I’m falling apart over here.

The Waterfords’ visit is also falling apart. A Canadian official tells Serena “I don’t know how you live with yourself”, and the good people of Toronto refuse to share an elevator with her. Their disgust has a visible effect on Serena, but Commander Waterford’s faith in his own superiority is resolute. He blames the hate on fake news, and even Luke bursting through a protest line to shout expletives and wave a photo of June fails to pierce his cold, dead heart.

There’s an old joke in Gilead that goes ‘a driver, a husband, and a pack of secret letters walk into a bar’. There’s no punchline, just a sucker punch of emotion as Nick finds Luke to tell him June is alive and pregnant with the Commander’s child. He gives Luke the bundle of letters he smuggled out of Gilead, and if this episode hasn’t already taken years off your life, Luke asks Nick to tell June that he’ll never stop loving her. HE’LL NEVER STOP, JUNE. Someone throw me into Serena’s greenhouse so I can drown the plants with my tears, ASAP.

The letters send an explosion of women’s voices through Canada, and the Waterfords are sent packing. “We believe the women,” the Canadian diplomat says, and excuse me while I get a giant maple leaf tattooed across my heart. Their drive to the airport takes them past protesters shouting their own names, a brilliant twist on the Handmaid’s name-fest in the supermarket. Knowing Fred will recognise her, Moira bangs on the car window and says her name is Moira, “not Ruby, you asshole”.

Stick that in your French horn and smoke it, Commander.

Nick returns to Gilead to tell June everything about the letters, Luke and Moira, and that Luke loves her. Nick says he loves her too, and it’s an embarrassment of riches for June when you consider her reduced circumstances at the start of the episode. “It does no good to want the impossible,” she’d said, but Nick’s update from Canada makes her want to challenge the reality of leaving her child. Maybe, just maybe, Janine was right all along: you just can’t keep people apart who smell like each other.

You can watch The Handmaid’s Tale and more on Lightbox right here: