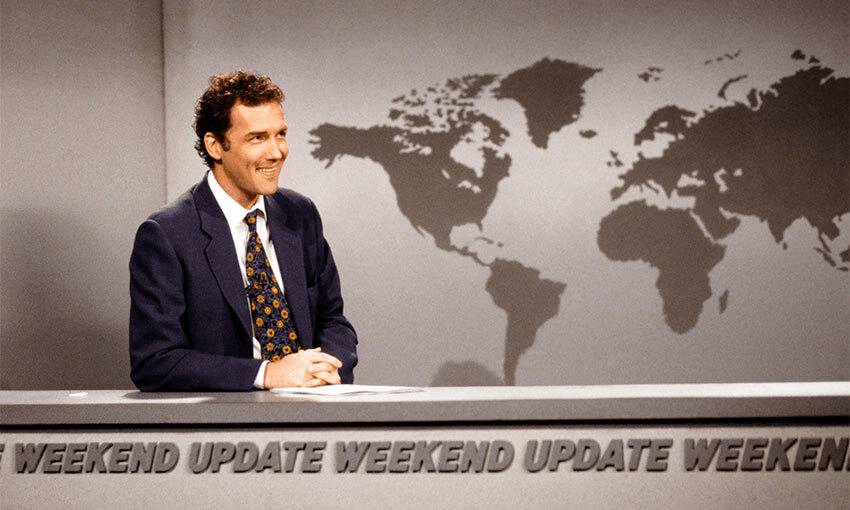 Norm Macdonald, who died this morning from cancer, was Jesse Mulligan’s comedy hero. He pays tribute to a man whose mainstream output never matched his talent.

Norm Macdonald is dead. The greatest joke writer, the deepest thinker, the most spiritual of America’s great generation of stand-up comedians leaves almost nothing physical behind as a legacy. As Saturday Night Live’s Weekend Update anchor, he delivered some of the best jokes in broadcast history but was allegedly fired for making fun of the network boss’s golfing buddy OJ Simpson one too many times. From there he stumbled through talkshow appearances and failed TV shows, eventually settling on a life of, well, it’s not clear what.

Fans like me were forced to get whatever Norm we could in his occasional podcast appearances or, never very satisfyingly, through his tweets. He was the funniest man on Earth, in my opinion, but there was no sign of it when he tweeted. He would commentate golf tournaments play-by-play in several hundred instalments; once, he constructed a Russian-style short story (with no jokes), 140 characters at a time. Many of my artistic heroes have, frustratingly, zigged when you expected them to zag, but with Norm it was almost pathological.

Have a look at his Comedy Central roast of Full House actor Bob Saget. While everybody else in the room makes off-colour gags about Saget’s relationship to the Olsen twins, Norm read straight-faced from a book of archaic retirement speech jokes (sample punchline “this man is for the birds!”). It wasn’t that he couldn’t do funny in a situation like that, when he wanted to, as demonstrated in an ad lib later that night. “Norm MacDonald, watching you perform tonight was like watching Henry Fonda pick blueberries,” jokes one of his lesser colleagues, making fun of Norm’s act and the mild response it had received from the crowd.

“Oh, Norm wants to say something,” the comic continues as Norm stirs in his seat.

“I’m just thinking,” Norm asks, leaning forward, “is there anybody in this room who wouldn’t love to watch Henry Fonda pick blueberries?”

The theatre erupts in laughter and applause.

Does that sound funny to you? I’m hopelessly biased. And of course, I am hearing his delivery, a particular cadence that made you laugh as soon as he opened his mouth. I once heard Norm complain about a compliment he’d often receive: people would tell him that it didn’t matter what he said, it sounded funny. But he took some offence to that, because he worked harder than anybody else on the words in the joke, too.

An unironic Christian, a problem gambler and a chronic self-sabotager, Norm loved comedy, loved to talk about the theory of comedy. He used to dream of writing a joke where the set-up was identical to the punchline, and he got very close with this one from SNL, presented as a news story: “Julia Roberts and Lyle Lovett have announced they are getting divorced. Sources close to the couple say it’s because she realised that she’s Julia Roberts and he’s Lyle Lovett.”

I could share a thousand of these one-liners with you, but I wouldn’t want you to think Norm couldn’t do stories, too. He once destroyed the talkshow format when he appeared with Conan O’Brien, sitting down at the desk and sharing a joke about a moth that lasted more than four minutes – a century in TV time. The punchline, when it came, was funny, but so was every word that came before it.

He was so funny, the funniest person I’ve ever witnessed do anything. His made-up memoir Based on a True Story contains a story about his audition for International Star Search, when he died onstage. I have never ever laughed so hard reading a book. My wife kicked me out of bed that night because I woke her up as my whole body shook trying to make it through the anecdote. And I am not a laugher. Earlier in the book, he recalls being the victim of a horrific incident of sexual abuse that leaves you feeling sick after reading it. The fact that those two anecdotes could co-exist reasonably comfortably in the same book, and that he wanted them to, was classic Norm.

I’ve talked before about when YouTube began and, for the first time, comedy fans in New Zealand could find clips of their heroes. That’s not quite such a big deal any more – if you really love somebody you can follow them on social, or watch a comedy special on one of the streaming platforms. But for Norm fans, YouTube is still where you’ll find the best stuff. He’s a comedian’s comedian, which in practice means that his mainstream output never matched his talent. You have to go looking for it, but perhaps that’s how he liked it.