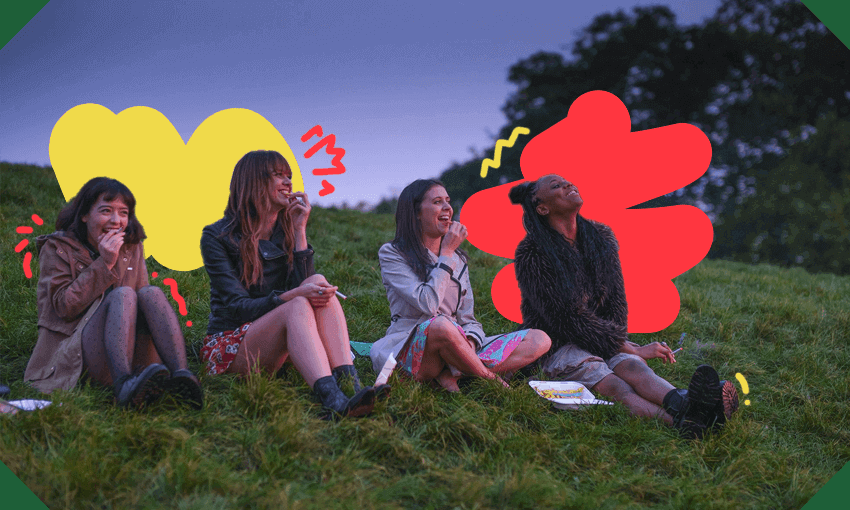 Spoiler alert: the “love” of Everything I Know About Love, the new BBC series now streaming on TVNZ+, is not romantic love. Based on Dolly Alderton’s wildly popular memoir of the same name, the show is a joyful, chaotic ode to the love that exists between friends, specifically four young women living together in London after finishing university.

I read the book a few years ago, at a time when my main criteria for determining enjoyment of media was “relatability”. So while I found it funny and delightful, I didn’t feel it really spoke to me given that I hadn’t moved to London or taken a lot of drugs. Several years on, I found a lot more to appreciate about the series. Alderton, who has co-writer and executive producer credits on the show, is probably a big part of this – the self-awareness and humour that distinguished her memoir is embedded throughout.

The show is anchored in the experience of being in your early twenties, where everything feels desperately intense and nobody has any idea what they’re doing. Nell, a teacher, parties through the weekends and despairs during the day, realising that she doesn’t care about her students’ behaviour. Amara fakes doctor’s appointments to dash from corporate meetings to dance auditions. Birdy, the quieter friend, tries to balance time with her flatmates with her first serious boyfriend. And Maggie, the character based on Alderton, stumbles into a dream job producing TV thanks to a lucky coincidence. She “chases the night”, regularly staying up until dawn, hoping that the party won’t stop.

The Guardian recently published a piece on Maggie as the archetypal “Messy Millennial Woman”, known for being both very fun and completely unreliable, the latest inheritor of a trope previously seen in shows like Fleabag and Girls. In Maggie’s spontaneous trips to Liverpool and haphazard passport-losing, she certainly fits the description. But while it’s easy to judge other people’s bad decisions (and the characters around Maggie do at times), the show is instead absorbed in portraying the relational consequences of these decisions. Maggie, and to a lesser extent her friends and housemates, make choices that hurt themselves and each other, but the show is less interested in their angst and self-flagellation than it is in their exuberance and care for each other. You may not know who you are yet, it says, but you have the tools to learn. And more importantly, you still have lots of time to have fun.

At times, this message can come across as rather hamfisted. Over several episodes, each of the four central characters has a realisation prompted by an alcohol advertisement that declares “Find the good times”. (At other moments, this exposition-via-text is more ironic; Maggie’s boss and landlord has a sign in her office reading “Make your own luck”, while a newly serious Maggie returns to her flat in the final episode with a poster that says “Work hard and be kind to people”). The final episode delivers what could be the thesis of the whole show: “You’re an extraordinary person who wants an ordinary kind of love”. This from Maggie’s mother, whose beautiful speech doesn’t quite feel merited by her brief time on screen.

But what makes this sometimes clumsy messaging forgivable – and what delighted me most about the show – is its earnestness. As playful and reckless as the characters are, they take their friendships seriously. A central thread that runs through the seven episodes is Maggie reconciling with her best friend Birdy’s new relationship – in one scene, they resolve to schedule time together to prioritise their friendship, and a few episodes later reconnect with a sleepover, giving each other makeovers and attention. The four housemates spend their free time choreographing dance routines, the pure fun of this endeavour at odds with the adult world: “But what’s the point?” asks the obnoxious hipster Maggie is dating.

That earnestness and humour can also be seen in the episode where Maggie and her friends host a “Queen” themed party for the 2012 Jubilee, all committing fully to their monarchy-themed costumes. Later, Maggie and her landlord get high at a street party for plot reasons, hallucinating a blurry Queen. It’s also a reminder of how strongly anchored the show is to a particular moment in time. The attention to time period detail shows in the costume design (the team combed Depop for secondhand high street clothing from the era) and the extensive, maybe too extensive, soundtrack.

Though the show is set just a decade ago, the early-2010s already feel ripe for nostalgic rewriting. There’s something gloriously pre-pandemic about all the maskless partying, dating apps existing as a mere curiosity and housemates still gathering to watch lowbrow reality shows on live TV. Four years after the book was published, added discussion of gentrification and privilege insert some politicisation to the other forms of self-discovery.

The nostalgia is less effective in the sepia-tinged, uniformed mirages of Birdy and Maggie’s childhood. In the original memoir, breathless messaging with unknown boys and the minutiae of English suburbia are rendered vividly and hilariously by Alderton’s writing. But – and perhaps this goes back to the question of relatability – I found Birdy and Maggie’s relationship far more compelling in the story’s present, as they figure out how to pair their love for each other with a longing for independence. I didn’t need to see them as gawky, inseparable teenagers to believe their relationship had weight.

After a restrained seven episodes, the series ends on a bittersweet note, with character arcs not fully resolved. From my hazy recollection of the book, Alderton has plenty more material from her twenties she could adapt for TV; she’s clearly holding out for a second season. I hope she gets it – I’d love to see more stories on screen about the delirious intensity of friendships you can cling to while everything else changes.

Everything I Know About Love is streaming now on TVNZ+.