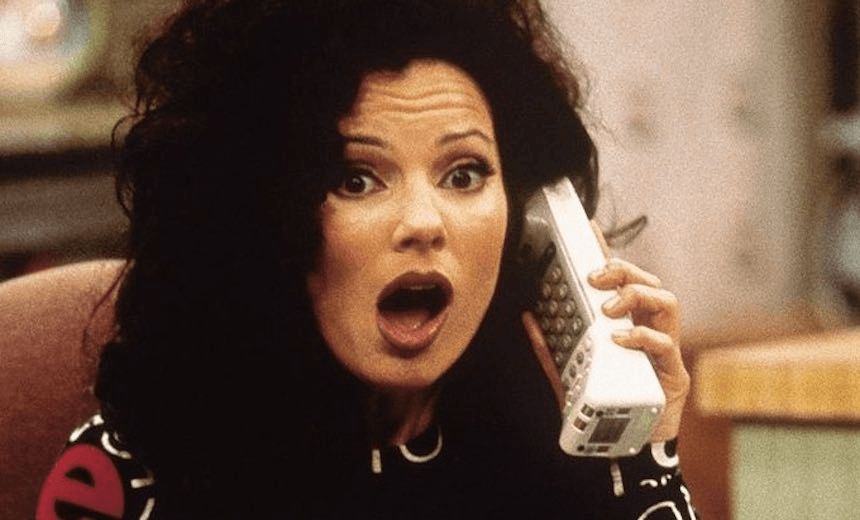 One day last year Sam Brooks started re-watching The Nanny and didn’t stop. Six seasons later, this is what he learned.

“Did The Nanny ever actually play in primetime in New Zealand?”

This is something I often wondered as I made my way through all the show’s six seasons last year. My main memory of The Nanny was of it airing in that strange deadzone between afternoon programming for children and the news – a zone where you might have also found Food in a Minute or 5:30 with Jude. I hadn’t considered it as a piece of entertainment, or something that you would watch consciously, more something you watched because it happened to be on. I don’t know what inspired me to re-watch The Nanny but before long I found myself curled up in the mildly cold Auckland winter watching episode after episode of this sitcom from the 90s.

It wasn’t necessarily a rough period in my life, but it was a period where I was a bit creatively uninspired. I was funemployed at the time, and genuinely so – I had enough money to live on and figure out what it was I wanted to do with my life next. And apparently what I thought would help me do that was watching all 146 episodes of The Nanny.

But did it hold up?

You might remember The Nanny as the sitcom with the lady with the high voice and the annoying laugh. You’re not remembering this incorrectly, but you are remembering only a little bit of the picture. I say this as someone who has watched all 53 hours of it very recently. I know The Nanny. My flatmates probably worried for my sanity hearing the theme song come out of my bedroom that many times in such a short period of time. By this point, The Nanny is in my soul.

The Nanny isn’t just a three-camera, studio-audience-slash-laugh-track sitcom with way too many episodes and a truly weird array of guest stars (Marvin Hamlisch, Spalding Gray, Joan Collins, Elizabeth Taylor, Pamela Anderson). No, reader, The Nanny is a piece of deeply weird sitcom auteurship. It’s the Broad City of the 90s.

This show about a Jewish fashion queen from Flushing, Queens who accidentally gets hired as the nanny for a Broadway producer’s three annoying kids, is auteur theory at its finest. Fran Drescher is the writer, creator and lead of the show, and the entire thing is full of what I can only assume is her personality and weirdness. And it’s the kind of personality and weirdness that appeals to me very much as a gay man with a specific range of cultural references. It’s a show that rests almost* entirely on her ability to sell rehashes of the same jokes episode after episode, do physical comedy and be insanely charismatic.

(*I say almost entirely because the show has a fairly strong ensemble – Charles Shaughnessy plays Maxwell Sheffield (“MISTAH SHEFFIELD”) with the appropriate amount of musty Britishness and the duo of Lauren Lane and Daniel Davis play haughty rich woman / sassy butler with way more life and fun than those stock characters dictate. Then there’s the Jewish mother / grandmother combo of Renee Taylor and Ann Morgan Guilbert (RIP) doing the same.)

Are the jokes a bit dated? Sure. It’s the 90s. Even Friends creaks a bit now. This is a show that got an entire season worth of conflict out of Maxwell telling Fran that he loved her and then taking it back. And they were long seasons in the 90s! Everything ran for like twenty-five episodes.

But what doesn’t date is Fran Drescher’s performance. Charisma ages like a fine wine, one that comes from a bottle and not a sack. You want to watch her, you kind of want to be her (I kind of want to be her) and you want to watch her have fun. Fine (the character) and Drescher (the actress) are brassy, self-deprecating and clearly having a ball. When Fine makes a joke, she smiles afterwards. This is a character, a woman, who knows she’s funny. She’s a clown. It’s not revolutionary, but this was the 90s! A time after Golden Girls, but still a time where men were asking if women were funny. Drescher’s performance mixes an easy charm with a ferocious ability to slam-dunk some truly tired punchlines like they’re gold. It’s a sitcom performance for the ages, and it holds up today.

There’s one bit where Fran Drescher spends about two minutes doing some drunk physical comedy for no other reason except that she’s in charge of the show and she’s pretty damn good at it. Then there’s the episode of The Nanny where Fran Fine, the titular nanny, meets Fran Drescher the real person. And Fran Fine asks Fran Drescher questions about the show The Nanny and says that Fran Drescher looks different in real life. It is absolutely insane, bizarre, not really funny and incredibly compelling TV.

There’s another episode where Bobbi Flekman, Fran Drescher’s character from This is Spinal Tap! appears and tries to seduce Mr Sheffield, and there’s lots of references to Bobbi Flekman and Fran Fine looking similar and it is equally bizarre, not really funny but incredibly compelling TV.

Admittedly these are more examples of The Nanny’s weirdness than there are Drescher’s brilliance, but again, this was the 90s! This was a network sitcom, on the same network that now gives you The Big Bang Theory. This shit was weird.

But what did The Nanny mean to me? As a kid, more or less nothing. It was something that was just on, and seemed like it had always been on or would always be on. It was the alpha and omega, as eternal as the news or Shortland Street.

But as a 25-year-old without creative direction, it meant a lot. Less the show and more Fran Drescher. Fran Drescher isn’t the only person who made this TV show, as much as the image of her sewing each of those insane outfits together is a comforting one on a dark day. There are countless creatives and crew members who made this happen.

And then it being greenlit. And going ahead for six seasons. Being nominated for a bunch of awards and being a genuine international sensation. Not all under her steam, but because she had a character and an idea and wanted to do something with it. (Of course none of this might have happened, but when you’re funemployed you might find yourself writing heroic backstories for the person you’ve spent 53 hours watching, which does not sound like a lot but is in fact a lot of hours).

Now, when I lack creative direction, I watch a clip of The Nanny. If Fran Drescher can do it, so can I.

(Specifically this clip of Fran Fine mistaking wasabi for mustard, which is universally funny and if you don’t like it something is wrong with you:)