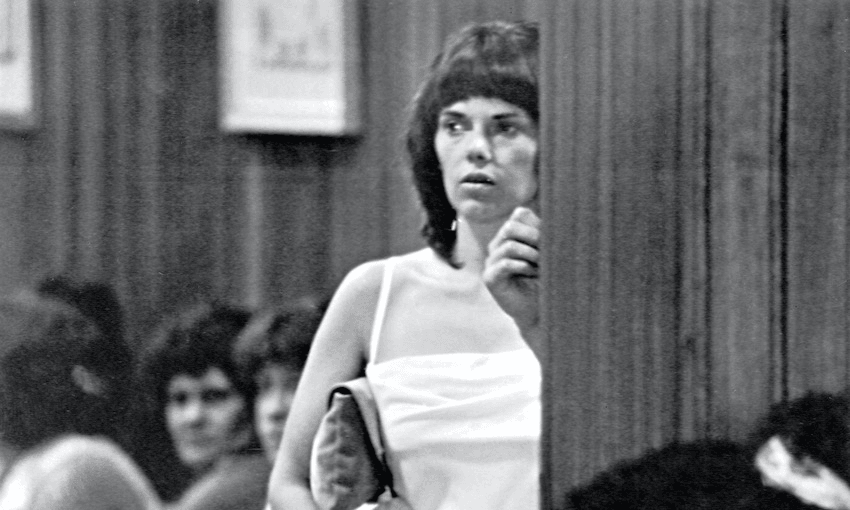 Review: Lindy Chamberlain finally gets a happy ending in Trial in the Outback

Trial of the Outback: The Lindy Chamberlain Story is a potent reminder that fighting for the truth is worth it, writes Sam Brooks.

“The dingo ate my baby!”

If there’s one line synonymous with Lindy Chamberlain’s story, it’s that. There’s a cruel irony that it’s not even what she said after the tragic death of her daughter, Azaria Chamberlain, after she was taken by that dingo. What she said has been reported differently many times, but was canonised, for better or worse, in the film based on her life, A Cry in the Dark (released under the terribly unsubtle name Evil Angels in Australia and New Zealand). In that film, Meryl Streep exclaims, in Chamberlain’s trademark hybrid accent, “The dingo’s got my baby.” It’s just that the line was twisted until it became a pop culture reference, cruel in both its brutality and longevity.

The irony comes from the fact there’s few stories that have been distorted by the media and the public more than Lindy Chamberlain’s story. There’s a reason why it’s been retold so many times, with Trial in the Outback – The Lindy Chamberlain story being the latest in a long line of series both factual and lightly fictional. It’s penance.

If you’re unfamiliar with the story, the short version is that on one horrid north Australian morning in 1980, Azaria Chamberlain was taken by a dingo. Despite ample evidence determining this was the case, both the state and the media were determined that Lindy Chamberlain had killed her child, and that her husband Michael was an accomplice. They were charged with this, and Lindy spent three years in jail as a result. The conviction was later overturned, and the Chamberlains spent 32 years trying to have it legally declared that their daughter had been taken by a dingo, rather than just being acquitted and determined innocent. They were successful in 2012.

Trial in the Outback tells this story comprehensively, with plenty of archival footage, and comment from many members of the Chamberlain family in the present day, Lindy looking a far cry from the stone-faced, black-bobbed woman the media presented us with. Today, she’s a cheerful woman with purple streaks in her hair and long silver acrylic nails.

I bring up Chamberlain’s appearance because it’s been a constant theme throughout her story, and one the documentary focuses on. It includes a lot of comment from journalists who covered the story (albeit the more sympathetic ones, because you can imagine the ones who did wrong are probably too ashamed to appear) and the most galling thing to me, who has only ever known Chamberlain as innocent, is how the media was complicit in framing and misframing her story.

As the documentary tells it, the entirety of Australia seemed to hate Chamberlain right from the start. In multiple interviews, she seemed to come off as emotionless and detached. This is, of course, because those interviews did not use the footage where she was crying. The theories people had seem absolutely wild to me, and range from Satanism to accusations the Chamberlains sold their daughter into slavery. We see multiple videos of Chamberlain entering and leaving the courtroom stony-faced, with cameras so close they’re literally hitting her in the face.

The documentary also asserts that the media were under pressure from the state, although it doesn’t feel like much arm twisting was needed. Even though the coverage was worldwide, Chamberlain was tried in a town so small that the jurors would be hanging out at the bar with the police, the journos and the general public. Another journo remembers being threatened because he was “making it sound like she’s innocent”.

The moment the media started framing Chamberlain as guilty, they had basically handed down her judgment. She was declared to be a strange woman, and in conservative north Australia, it doesn’t take much for the collective mind to jump to collective cruelty. A strange woman might as well be a guilty woman. Even after she was cleared of any crime, people still believed she did it. I wouldn’t be surprised if there are still people out there, against all evidence and clear-minded judgment, who still believe she’s guilty. I suppose it’s difficult to convince a wrong person they’re wrong just by presenting them comprehensive facts and evidence. (To be clear: Chamberlain’s “strangeness” extended mostly to being a Seventh Day Adventist and a vegetarian. Hardly a David Lynch character.)

Trial in the Outback brings to mind another recent documentary, with a much more direct title: Framing Britney Spears. That doco is about all the ways the media cornered one woman, her career and her image, until she frayed and imploded. Trial in the Outback is a tragic story, but one with a much happier ending. It tells the story of a woman who fought against the frame she was given, and beat the frame until it represented her truth. It’s a painful tale, but one that’s worth watching, just to remind you of how damaging the power of the media can be in the wrong hands. But also? It’s a potent reminder that fighting for the truth is worth it. Just look at Chamberlain now, sitting comfortably in her truth, clacking those beautiful silver acrylics against each other.

The first part of Trial in the Outback – The Lindy Chamberlain Story airs tonight on TVNZ1 at 8.30. The second part airs next week.