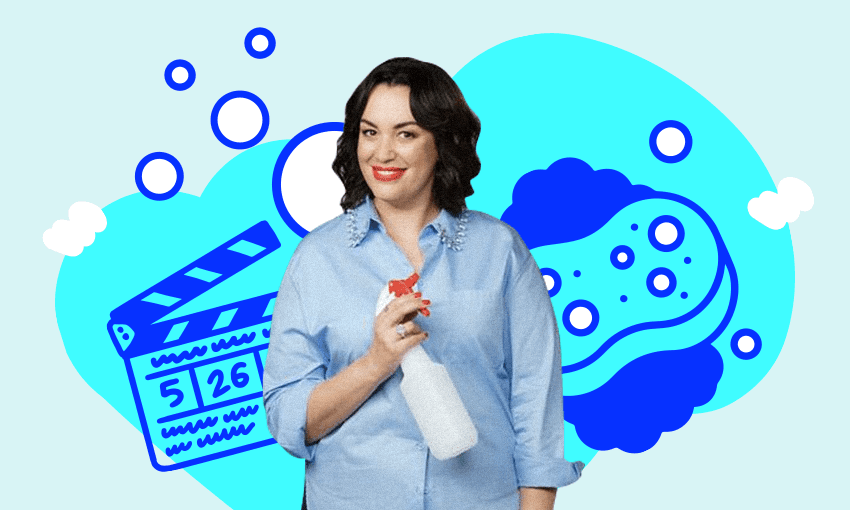 Kanoa Lloyd, ready to sort your life (and your house) out, with a smile on her face. (Photo: Three, Image Design: Archi Banal)

Kanoa Lloyd, ready to sort your life (and your house) out, with a smile on her face. (Photo: Three, Image Design: Archi Banal)

A new series helping New Zealanders declutter is coming to Three this week. Sam Brooks talks to host Kanoa Lloyd about what made being invited into strangers’ homes so special.

Imagine if a TV crew showed up at your house and asked you to recycle, donate or sell half of the stuff you’d accumulated over the course of your life. Your response would probably be, “Absolutely not, no thank you, try next door.” But what if that crew was fronted by The Project’s Kanoa Lloyd – you’d be more inclined to hear her out, right?

Despite the bossy title, Three’s new series Sort Your Life Out is a gentle sort of show. “Hey, Let’s Help Get Your House Sorted Out, Eh?” would be a less catchy but more accurate fit. Based on a BBC format described by The Guardian as “perfect TV“, the series sees Lloyd, alongside organisational expert Natalie Jane (literally a member of the International Institute of Professional Organisers!) and builder Sean Brown, swoop in like a three-headed Marie Kondo to help families confront their clutter.

Lloyd wasn’t sure if she wanted to do the show at first. When the offer came in she was still on maternity leave from The Project and TV work was the last thing on her mind. “I did not want to see emails from my agent,” she says. “I wasn’t sure if I even wanted to go to work again – maybe I’d just give it all up and be a mum full-time.” However, when she sat down to watch the BBC version, an instant success when first aired in the UK last year, she was quickly hooked.

The appeal wasn’t just that it was entertaining, comforting TV. Lloyd says she realised Sort Your Life Out was something she could meaningfully participate in. As a child she moved homes a lot, and with so much upheaval in her life the things she owned grew in importance. Even now she still owns a lot of things that have accompanied her from flat to flat, and more recently to the house she now owns with her husband.

“It doesn’t matter where you are in the world or in your life, you do surround yourself with things that you love,” she says. “People like stuff!”

Lloyd is the friendly face of the series, holding the hands of the families as they sift through objects representing many years of their lives and, more often than not, a few buried issues. Professional organiser Natalie Jane is like the bad cop to Lloyd’s good cop, asking the family the hard questions about why they’re holding onto things, while builder Sean Brown gets to work on the  houses to make them easier to keep uncluttered: an uplifted cabinet here, a dozen cubby-holes there.

“We have a really clear goal in Sort Your Life Out,” Lloyd says. “We want these people to feel their best, to feel proud of their home, and to be able to do what they want to do in their work and life easily.”

She describes her role on the show as “just vibes”, but in reality it’s a little bit more significant than that. Lloyd is the first person the families interact with, and the person they’re already familiar with – when she shows up at each family’s door, they’re elated to see her. That’s not a role just anybody can slide into. If, say, Paul Henry showed up at my door trying to convince me to get rid of half my stuff, the first thing out the door would be him.

Lloyd approaches the gig with the kind of good humour that’s made her such a popular presence on The Project. She’s able to poke a little bit of fun at the sheer amount of stuff that’s accumulated in these families’ homes, while also acknowledging that, yup, it is an issue and there’s work to be done.

While she happily admits it’s easier to offer advice than to follow it herself, Lloyd says doing the show has helped her declutter her own home. But there are some things you can never get rid of, and for her it’s her mum’s pottery. Both her parents were amateur potters when she was a child, and her mother returned to the hobby after she retired. “Over the years I’ve received some of her pieces, broken them, glued them back together and I still have them,” she says. “I don’t even know if she would want me to keep them, but they’re from different times in our lives, and they’re really precious to me. Yeah, that one’s broken but it can still be a makeup brush holder!

“I think things like that, things where I really know who made it, or where I was when I got it, I can’t always throw those things away.”

In one episode of Sort Your Life Out, the team helps a woman who lost her husband several years ago, and then lost her mother during the pandemic. She became, as Lloyd puts it, a curator of all the things that once belonged to these people who were so close to her. She doesn’t know if she managed to have a breakthrough moment with her on clutter (though I’d suggest she definitely helped), but says it was still a real privilege to look through those things that held such meaning.

“I think sometimes that can be the thing they need: having someone else acknowledge, and understand why that is special to them. It can be enough for them to go away and make that decision by themselves.”

Even though the other two may do the hard yards, it’s Lloyd – and her empathy – that embodies the kaupapa of the show. She’s warm but not cuddly; light but not breezy. When she tells these families that they can try a bit harder, dig a little deeper, it’s not because the show’s format requires it. It’s because she believes it.

Sort Your Life Out airs on Three on Wednesday nights at 8:30pm, and is available to stream on Three Now.