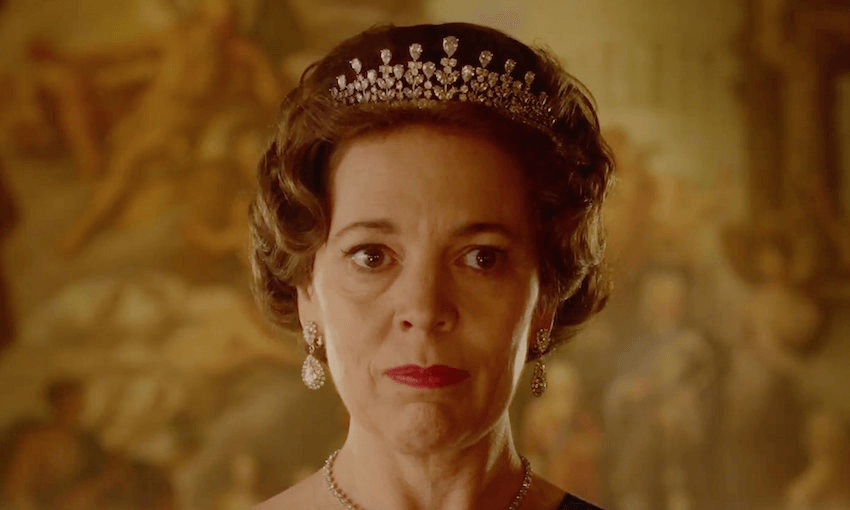 Olivia Colman plays Queen Elizabeth in season three of The Crown, dropping on Netflix in November.

Olivia Colman plays Queen Elizabeth in season three of The Crown, dropping on Netflix in November.

Informed via telegram that Netflix has released a full trailer for the new season of The Crown, Tara Ward puts on her best pillbox hat and white gloves to find out what round three will bring.

The good Lorde told us we’ll never be royals, so the first full trailer for the new season of The Crown is the closest we’re ever going to get. Before season three of the acclaimed Peter Morgan drama drops on November 17, Netflix have released a sneaky wee teaser about what lies ahead for the Windsors during the tumultuous 1960s and ’70s. Best of all, it gives us a proper look at the new cast, including the always amazing Olivia Colman as Queen Elizabeth II,  Tobias Menzies as Prince Phillip and Helena Bonham Carter as Princess Margaret.

The times they are a changing, and the Windsors are having a stink time of it. It must be awful having all those riches and jewels and big pillows, while trying to keep your subjects happy so they don’t take back all their riches and jewels and big pillows. Elizabeth has a lot on her royal plate, including a grumpy sister, a lovesick son and a husband who’s started wearing tracksuits in public.

No wonder the Queen looks shocked. A tracksuit on a Duke? A trackduke! Off with his head.

The Crown is a rich and sumptuous drama, so my apologies to the entire Commonwealth for pulling this trailer apart with all the class of pair of Phillip’s sweatpants. What can I say? I was raised on a steady diet of my Nan’s NZ Women’s Weekly’s, and this is the stuff they drill in to you: soak the Royal Family up like a sponge, there are 400 different ways to make Rice Bubble Slice, and you can take your wardrobe from day to night in five easy steps. Times change, duty endures, and a small black handbag never goes out of style.

Here’s what we know about the new season of The Crown.

Elizabeth’s been on the throne for 25 years, but it’s all turned to shit

The Queen is surviving, not thriving. “This country was still great when I came to the throne,” Elizabeth says, “and all that’s happened on my watch is the place has fallen apart.” Sure, dealing with miners’ strikes and political upheaval and public unrest must be stressful, but maybe the Queen should save her freak-out for 1992 when three of her children get divorces and her favourite castle burns down.

The costumes are spectacular

My fave is the Queen’s marshmallow tree hat. Lock that gem up in the Tower, it’s a national bloody treasure.

Despite the Windsors enjoying a busy schedule of fancy parties where you use seven different types of forks and you’re only allowed to talk to the person on your left, everyone looks miserable. Why is that? I love using more than one fork.

Princess Margaret is pissed off at her sister, again

Where else but The Crown will you find Helena Bonham Carter wearing a tiara in the bath? Tensions grow between the two princesses, as Margaret’s marriage to Lord Snowdon collapses and she continues to play second fiddle to her sister. “Frustrations and resentments can build up from a life as a support act,” Margaret says, but in the words of her Queen: “It is not a choice, it is a duty, and always start with the third fork from the left.”

The carpets/corgis are out of this world

There are not one, but two bathtub scenes in this trailer, which proves that even the noble classes love a long hot soak in their own filth. Season three shows the blossoming love affair between Charles and Camilla, and it’s old mate Wallis Simpson who pops up to warn Charles not to trust his family.  Fair enough, but could Wallis whip up a killer Rice Bubble Slice in ten easy minutes? Jury’s still out.

Everyone’s determined to keep calm and carry on

“It’s only fallen apart if we say it has. That’s the thing about the monarchy: We paper over the cracks.” Can’t see any problems with that approach, God Save the Queen on November 17 and forevermore.