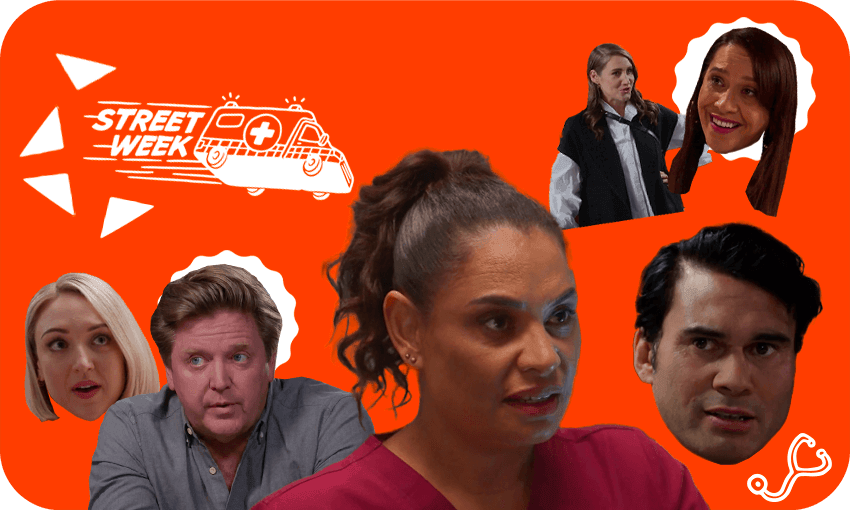 Thinking of heading back to Ferndale for the show’s big anniversary this week? Tara Ward brings us up to speed on all the important drama.

Shortland Street is turning the big 3-0 this week, and we’re more excited than a handsome doctor reuniting with his three long-lost sperm-donor children. It’s been a dramatic journey for New Zealand’s longest-running drama, three decades full of romance, heartache, explosions, murders, truck crashes, helicopter crashes and the time Chris Warner fell off a flying fox. Poor Dr Love – 30 years of hot girlfriends and that playground mishap may prove to be his enduring legacy.

Of course, not everyone has been watching Shortland Street for 30 years, or even 30 minutes. If it’s been a while since you last visited Ferndale, don’t panic. We’ve watched Shortland Street so you don’t have to, and we can bring you up to speed quicker than the time Leanne took vitamins laced with methamphetamine. Let’s get this party started.

Dr Love has been cancelled

The Tāne Mahuta of Shortland Street has fallen, and Chris Warner is lying in a forest of his own misfortune. His reputation was ruined after a disgruntled colleague posted an old video that showed a drunk Chris imitating the haka, and then his ex-girlfriend Zoe returned to Ferndale and accused him of sexual harassment. He lost the respect of his colleagues and worst of all, his hair is a mess. Just look at it. Every follicle is screaming.

Chris’ girlfriend Vivienne stood by her man, but the rest of Shortland Street turned against him. Despite Zoe withdrawing her accusation, Chris was sacked as CEO and relegated to work in a storeroom. A storeroom! Things haven’t been this bad for Dr Love since he put on some gold sequins and attempted to rap in public.

TK is doing the dirty in two cities at once

Is it a legal requirement that the CEO of Shortland Street is a cheating scoundrel with a fine head of hair? Yes, your honour, it is. TK Samuels was thrilled to fill Chris Warner’s butt prints in the CEO swivel chair, but soon discovered his ex Te Rongopai was the one who got him there. It was Te Rongopai who played dirty by convincing Zoe to make the complaint against Chris, and then encouraged the DHB to make TK CEO.

Now Te Rongopai and TK are playing dirty in the bedroom, after they hooked up on a business trip to Wellington. Cece won’t be happy to discover her boyfriend had sexy times in our nation’s capital, and TK has more chance of a fully staffed ED than wriggling out of this mess. Why are there never enough nurses at Shortland Street, anyway? Rachel McKenna wouldn’t put up with this shit.

Desi and Damo are preparing to tie the knot

The wedding of the year is upon us and the person in charge of it is… Bree Tomasel? That’s right, the Celebrity Treasure Island host is producing Desi and Damo’s wedding as part of her new reality show Honeymoon or Doom, and she’s holding the Double Ds to contractual ransom despite them being too poor to get married. Damo and Desi are homeless, sexless, their business is going down the gurgler and a bird shat in Desi’s coffee. Things are bad, but as Damo said, “at least I’m not Chris Warner”.

Esther and Marty are back together, but not everyone’s happy about it

Esther may still be grieving the death of her beloved Curtis, but she’s back pashing Dr Marty in the supply cupboard even though he went to Queenstown and hooked up with Monique, who later turned out to be TK’s new PA. And what’s with Dawn sticking her nose into Marty and Esther’s relationship, as if she’s secretly in love with Marty even though they already had socially distanced sex during the first lockdown?

Whatever way you look at it, Esther and Marty are weaving a tangled web that’s nearly as sticky as the surfaces in that supply cupboard of sin.

There’s trouble ahead for Drew and Dr Harper

Harper recently gave birth to baby Skye, but she’s exhausted from breastfeeding and is hormonal as hell. She’s also still married to Drew, the arrogant chump of a surgeon who somehow makes Harper laugh so hard that she forgets he once slipped over in a sea of his own shit. Don’t worry, Harper. We’ll never forget the great poo-nami of 2018.

Dawn is a one-woman crimewave

In the past month alone, Dawn has been arrested for armed robbery, suspended from work, stabbed a detective, assaulted her doppelganger, shot her doppelganger with a nail gun and then tried to foster the doppelganger’s children. She’s also been obsessed with wild foraging, which everyone seems to have forgotten about now that she’s planning a cosplay buck’s night for Damo. Shit, she must be exhausted. I hope she celebrates 30 years of Shortland Street by sitting down quietly and doing nothing.