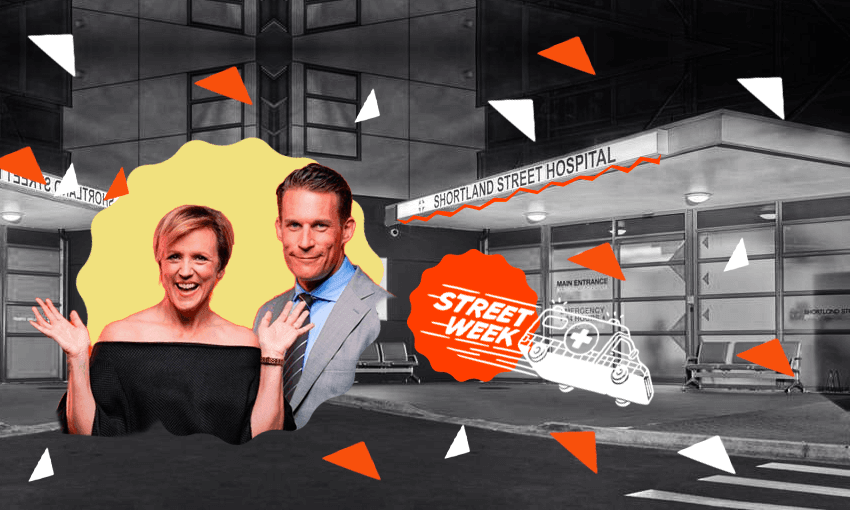 Seven Sharp descends on Ferndale tonight for a documentary special about the local hospital turning 30. Hilary Barry tells Tara Ward what it was like filming the reality-blurring New Zealand TV crossover event of the century.

From the moment Hilary Barry first stepped inside the TVNZ building, she dreamed of making a cameo on Shortland Street. Tonight, as the show kicks off its 30th anniversary week, we’ll see that little cameo turn into something bigger than the Seven Sharp presenter ever anticipated. “I thought when they said ‘it’s our 30th birthday, would you like to do a crossover appearance?’ that I might play a person who’d hurt themselves or had their pulse taken in the ED,” Barry says. “Maybe one line, if that.”

But instead of one measly line of dialogue, this Monday and Tuesday night Barry stars in two full crossover episodes, playing a reporter who’s in Ferndale to film a special Seven Sharp documentary about the hospital. The lines between fact and fiction are delightfully blurred – almost as confusing as the time Carmen came back to Shortland Street as an entirely different character. Barry’s Seven Sharp sidekick Jeremy Wells will introduce each episode from the Seven Sharp studio, meaning Seven Sharp will be on both TVNZ 1 and TVNZ 2 at the same time this week. Barry anticipates some chaos. “People will tune into Shortland Street and go hang on, am I on the wrong channel? Be warned!”

Shortland Street will depart from its usual soapy structure for the crossover episodes, instead filming in the candid style of a fly-on-the-wall documentary with Barry interviewing some of the hospital’s key staff about how the hospital has changed their lives. “The lovely thing about it, I think, is that you get to hear the innermost thoughts of the characters describing their emotions, rather than acting them out,” she says. “It’s actually really moving.”

Also moving is Hilary Barry’s performance as tough-but-kind journalist Hilary Barry. Having last acted in the Masterton amateur theatrical society production of Cabaret in the early 1990s, Barry admits her skills were a bit rusty. It’s hard to tell, because she looks right at home on Shortland Street. She holds ex-CEO Chris Warner to account and supports emotional new mum Harper, makes jokes to camera and puts patients at ease. Based on this performance, Hilary Barry one day playing Hilary Barry, CEO of Shortland Street, doesn’t seem entirely outside the realm of possibility.

Despite Barry already being on the telly five nights a week, the long-time Shortland Street fan was daunted by the prospect of appearing on the iconic soap. Not only was she featuring in some of Shortland Street’s most high-profile episodes, she had pages of script to learn and scenes with some of her favourite characters, including world-renowned surgeon and “absolute trainwreck” Chris Warner.

Barry admits she freaked out. “I had to just pull myself together,” she says. “I was having this fangirl moment as well as trying to be an actor, which is out of my comfort zone anyway, even though I was playing myself. It was multifaceted stress, really, anxiety and over-excitement.”

It’s not just Shortland Street celebrating the big birthday – Seven Sharp will mark the occasion on TVNZ 1 with a separate story of their own. “There’s a lot of love going around,” Barry says of the cross-channel shenanigans, adding that even though both shows share a time slot and compete for viewers, she wants Shortland Street to do well. That’s exactly what the next CEO of Shortland Street would say, of course.

“30 years is an incredible, incredible achievement,” Barry says. After three decades on air, Shortland Street has become part of New Zealand’s social fabric, regardless of whether you’re an avid watcher or someone who dips in and out of the show. “There are so many of us who have got to know the characters and been absorbed by the stories, which are always really relevant. You know, they’ve always been really brave and weaved what’s happening in the real world into their storylines.”

There’s nothing more real-world than Seven Sharp, but Barry reckons her cameo is both the beginning and end of her acting career. “I just about passed out trying to learn these lines, I don’t know how they do it,” she says, praising the incredible work rate of the Shortland Street team. “I’ve heard this before about Shortland Street, about how incredibly quick turnaround everything is. But my goodness, until you’ve seen it first hand, you just cannot appreciate how hard they’re all working.”

Those were our people today, and that’s Seven Sharp – and Shortland Street – tonight.

The Shortland Street/Seven Sharp anniversary crossover episodes screen on Monday and Tuesday nights at 7pm on TVNZ 2 and on TVNZ OnDemand.