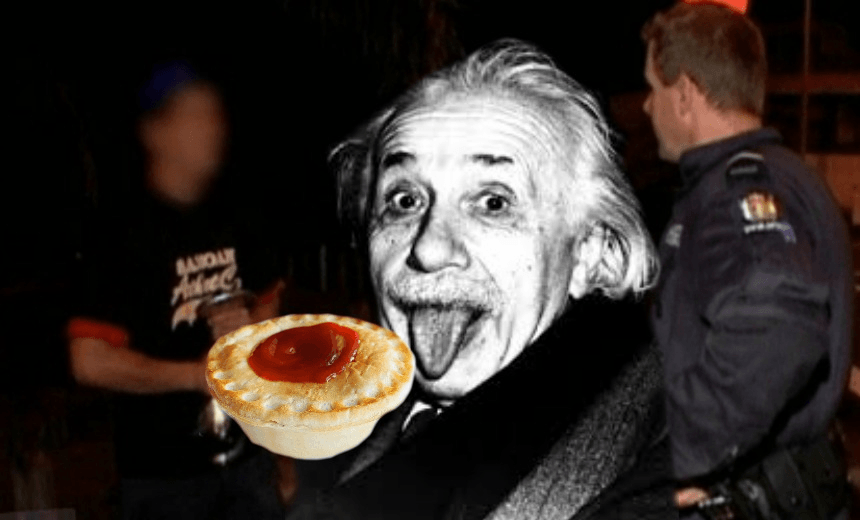 Can it really be seven years since the world was first introduced to the hilariously deadpan Sgt Guy Baldwin on Police Ten 7?

His advice to Glen – a surly teen who supposedly had the 3am munchies – to “ blow on the pie” led to him becoming a YouTube sensation in 2009. Baldwin warned that a pie that had been in the warming drawer of a BP service station for “probably about 12 hours” would be thermonuclear. Even though he used the George W. Bush “new-kew-lah” pronunciation, everyone understood what he meant.

Interestingly, for reasons outlined below, his exhortations also elicited significant interest throughout the scientific community. Could there indeed be such a thing as a thermonuclear pie? And what would be the ramifications of such an energetic foodstuff?

To answer these questions, we need first to define what is meant by “thermonuclear”. The word itself provides us some clues-“thermo” from the Greek for “hot” and “nuclear” from the English for “nuclear”. We’re talking very high temperatures here.

In order for a substance to be thermonuclear, it has to be at a temperature of a few million degrees Celsius. This is several degrees higher than would be obtained from 12 hours in even the best BP pie-warmer.

At such high temperatures, strange things happen: the nuclei of the atoms in the substance fuse together, leading to a slight loss of mass in the substance and the release of truly mind-boggling amounts of energy. This is the process that powers both a hydrogen bomb and our Sun.

Let’s assume we have a thermonuclear pie, weighing 200 grams (the flavour isn’t important, just the mass). Using the most famous equation in all of science, E = mc 2, we can calculate that the maximum energy that could be released on heating a pie to a temperature of millions of degrees would be similar to that contained in 4 million tonnes of TNT.

Who would have thought that the humble pie could potentially be a weapon of mass destruction? George W. Bush, maybe?

We can see that it is highly unlikely that 12 hours in a BP pie-warmer will render a pie thermonuclear. But what of Sgt Baldwin’s suggestion to “blow on the pie”? This is indeed sage advice. Blowing across the pie will lower the temperature of the air above it.

However, one must be careful, as this process will only lower the temperature of the outside of the pie; the semi-liquid innards will still be at temperatures that can cause severe blistering, should they shoot out following particularly aggressive biting.

Perhaps the best advice would be to gently eviscerate the pie and blow on both the crust and the innards. In so doing, both will be cooled and we can ensure that Sgt Baldwin’s parting words – “safer communities together” – become more than just a mere slogan.

This throwback is brought to you by NZ On Screen, click here to watch more classic Kiwi TV moments from their vast collection. Safer communities together.