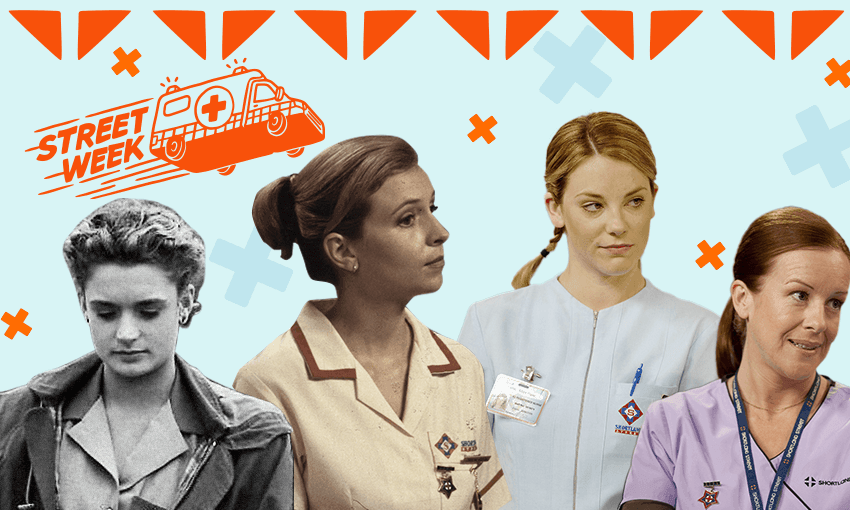 Shortland Street has been around for as long as I have been alive – that’s 30 years of stethoscopes, love triangles, serial killers, stretchers and Dr Chris Warner. Another long-standing stalwart is the uniform worn by the nurses whenever they’re at work. Much like the hospital beds and hard-to-pronounce diagnoses, the outfit has lent a sense of legitimacy to the show – an immediate visual reminder we’re tuning into a medical TV drama every weeknight.

Shorty Street’s uniform, like every modern nurse’s outfit, can be traced back to the late 19th century. English social reformer Florence Nightingale is largely credited with creating the nursing profession as we know it today, including establishing hygiene standards, methods of care, meticulous record-keeping and some of the very first training schools. Nurses’ uniforms started to look more professional, and are said to have been inspired by the habits worn by nuns – nurses pulled their hair back and often kept it under caps so it didn’t get in the way; white aprons were fastened over floor or ankle-length, dark-coloured dresses; and the overall uniform, lacking decoration, was practical.

Much has changed since then, the starkest difference being that white uniforms were replaced with darker hues that could withstand the visceral demands of the job and help ease the strain on people’s eyes as they operated in bright white surgeries. Moreover, in the 1980s, dresses and pinafores gave way to trouser-style scrubs, which got their name because they were worn primarily in “scrubbed”, or sterile, environments.

Looking back over the last three decades of Shortland Street, the uniform has been altered several times, with the general trend reflecting what’s happened in real life – casual, relaxed workwear has largely taken the place of formalwear. Here’s how our homegrown TV drama has rung in the sartorial changes.

The first uniform is immortalised alongside head nurse Carrie Burton’s famous line: “You’re not in Guatemala now, Dr Ropata”. The withering takedown cuts deeper given the azure blue dress she wears buttoned to her neck, its white collar, cuffs and belt finished with red accents. Junior nurses wore cornflower blue uniforms with pops of white and a more relaxed lapel neckline, yet both uniforms read militarily strict – perhaps a nod to the profession’s look after the second world war. Perhaps the private hospital hadn’t got the scrubs memo that had been circulating elsewhere in Aotearoa and the world for at least a decade.

The hospital still hadn’t got on the scrubs train by the middle of the 90s, but the uniform did start leaning in a softer direction. Two distinct memories come flooding back every time I see the mid-to-late 90s uniform: Robyn Malcolm’s Ellen Crozier wearing a scarlet red cardigan over her uniform and a storyline involving some brown-coloured liquid (possibly sewage) flooding the hospital, leaving two characters, one of them a nurse, trapped waist-deep in the elevator (I double-checked I wasn’t making it up and found validation on Reddit).

A NZ Herald article from 2001 headed “Shortland Street gets real” details the upgrades the hospital received at the time. Among the changes included a new sky-blue uniform that was “more fitting for a public hospital” – gone was the private-hospital dress, replaced with short-sleeved, crew neck shirts with fitted shoulders and a zipper running down the middle. The scrubs memo finally, albeit partially, arrived – male nurses ditched the zipped shirt for V-neck, steel-blue scrubs toward the latter end of this period, while female nurses sometimes appeared in mint-green scrubs. Still, compared with its immediate predecessors, this facelift kickstarted the show’s shift toward more relaxed workwear.

For several reasons, when I think “Shortland Street” I immediately think of this version of the uniform. One, this period was the last time I watched the show. Two, it’s a shirt-and-trouser combo with a new wraparound tunic top that fastens at the side. And three, the lavender hue seems both novel and natural, especially compared to its immediate predecessor. This iteration marks a design high-point – an altogether different look that still feels elevated and casual. Cinched and snatched.

The V-neck scrubs got a facelift – think jewel tones and a curvy V-shaped neckline with a small, white connective stripe and a larger one tracing the nape. The latter reminds me of the All Blacks jersey of 2018, which suggests Shortland Street beat the boys at the design game. Goal! Touchdown! Try!

The gemstone colours may have stayed the same but the curvy V-neck has gone, replaced with a (boring) straight V-shaped neckline. If Shorty’s sole endpoint were scrubs that real nurses would wear while caring for people at any actual hospital nationwide, then the producers – and casualwear – have succeeded. But it’s never been a real hospital – and that’s why we keep tuning in. Sure, compared with the big-budget stardom of Grey’s Anatomy or ER, Shortland Street’s make-believe has always been within our grasp. But TV allows us to escape our everyday lives to live out far-fetched storylines with bigger-than-life characters dressed in cool, bespoke costumes. So why can’t the best pretend nurses in Aotearoa wear something more imaginative? Bring back the lavender tunics.