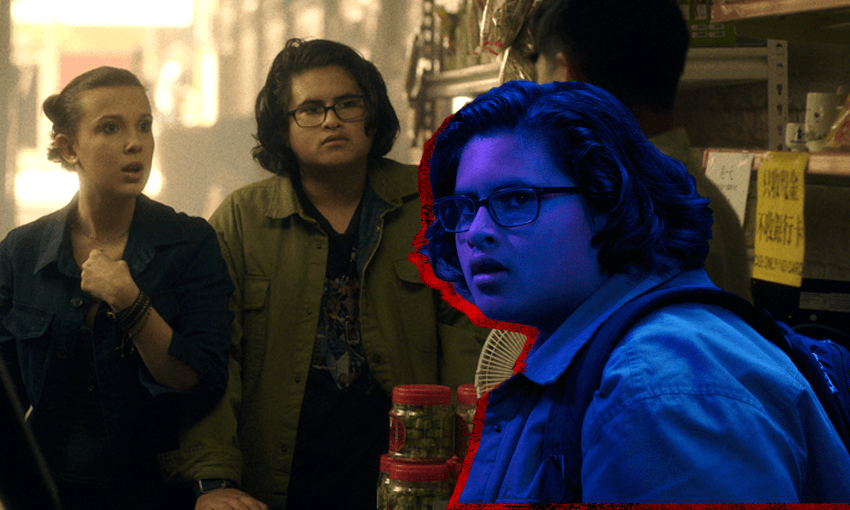 From the Hutt to Hollywood: Julian Dennison on his biggest blockbuster yet

Five years on from his star turn in Hunt for the Wilderpeople, Julian Dennison talks to Stewart Sowman-Lund about his new film Godzilla vs Kong, working with Millie Bobby Brown, and ‘those’ Subway commercials.

Julian Dennison and I have something in common. It’s not just that we’re incredibly talented and beloved, but we both grew up in the Hutt Valley. For some reason, he’s the one who went on to huge Hollywood success. Go figure. Now, sitting face to face in a Universal Studios boardroom, I have the chance to ask him how someone can go from the Hutt to Hollywood in less than five years.

The 18-year-old, who stars in the new action movie Godzilla vs Kong, out in cinemas today, says global success was something he always aspired to. “It’s crazy to say that a kid from the Hutt could go to LA and succeed in the industry. I think I’ve had a lot of opportunities but I think it was about grabbing it by the nuts – that was a weird analogy – and riding with it,” he says with a laugh.

He may be just on the verge of adulthood, but Dennison is incredibly self aware about his own success – even if he feels a tad uncomfortable talking about it. Unsurprisingly, he puts his new found global fame down to his starring role in Taika Waititi’s Hunt for the Wilderpeople. “I owe a lot to that film,” he says. “I remember when that film came out, the team were like: ‘let’s go to LA and just meet people and make connections’.” Success in America is about “who you know”, he says, and Wilderpeople helped open doors. “People resonate with a good heartfelt story and that’s what Taika did with Wilderpeople,” he says.

In the years since the release of Wilderpeople – filmed when Dennison was just 13 years old – the teen has gone on to star alongside Ryan Reynolds in Deadpool 2, Kurt Russell in the sequel to Netflix’s The Christmas Chronicles and, now, Millie Bobby Brown in Godzilla vs Kong. Brown, herself just 17 years old, became a household name at 12 after the first season of Stranger Things. After a career built on working with adults, Dennison enjoyed the chance to act alongside someone his age. “I hadn’t really done that for a while,” he says. “Having someone of a similar age was really refreshing.”

In Godzilla, which was filmed in late 2018 and early 2019 in Hawaii, Australia and Hong Kong, Dennison plays “nerdy kid” Josh Valentine – thrust into the centre of the adventure with his best friend Madison, played by Brown. Both became overnight famous at the same age most kids are working towards their high school exams. He doesn’t like the term “child actor” – “we’re all actors, we’re just young” – but said that being the youngest meant the pair spent a lot of time together on set. “It was good being able to relate to somebody,” he says of his time working with Brown. “It must be hard growing up in the limelight and always being seen.”

The pair share almost all their scenes, something Dennison said allowed them to bond over their parallel experiences in the film industry.

I’m interested to know how different the experience of working on a Hollywood set is from Dennison’s time working in New Zealand. Since Wilderpeople, he’s primarily starred in big budget productions, but he says the basics remain the same – you just get a “better lunch and a trailer” in Hollywood. The scale of working on a film like Godzilla is bigger too: “[A film like Godzilla] has money and then on Hunt for the Wilderpeople, we had no money,” he jokes.

“The New Zealand culture is that you ‘get into it and you do it’. But in Hollywood, it’s a slower process. It’s so big and there’s so many moving parts, there is a lot to take into consideration. I had to adjust.” He plans to remain involved with the New Zealand film scene, however. “I love doing these big blockbuster films, they’re fun. But I would love to get back into some smaller independent stuff and New Zealand is really good at telling stories. You stay loyal to the soil.”

The past 12 months have seen a lot of industries take a hit from Covid-19, the film industry included. For Dennison, that’s meant more time spent in New Zealand. He says he’s enjoyed the down time and freedom that has given him. It’s part of the reason you’ve probably seen Dennison pop up on your TV screen shilling Subway sandwiches in commercials that have proved… divisive. “During lockdown, I just wanted to do something,” he explains. “It is a ridiculous ad – I am rapping about a sandwich – but I crack up every time I watch myself because I look like an idiot.

“You have to laugh at yourself – that’s how it is being a New Zealander.” Not only did it give him something to do, but it was Subway, so “there was a good pay cheque”.

Once Covid allows, the teen will no doubt be taking advantage of the exposure Godzilla has given him. He joins a long list of New Zealanders, like fellow child actor Thomasin McKenzie, making massive strides in Hollywood. “I think right now the rest of the world is understanding what Kiwis are really like, we’re getting out there. We have a unique voice and a unique way of telling stories.”

He was able to keep his New Zealand accent in Godzilla because the director, Adam Wingard, thought it sounded “exotic”. Americans love us, Dennison reckons. “It goes way back to Flight of the Conchords, or What We Do in the Shadows, or Eagle vs Shark. Americans love that stuff.” He’s often stopped in the street overseas to talk about What We do in the Shadows – despite not even being in that film. “They… appreciate what we do. Taika had a really big part to play, especially with indigenous [actors]. What he said at the Oscars: we are the original storytellers. He has helped usher us up onto the stage, and that’s for the good.”

Waititi dedicated his 2020 Oscars win to “all the indigenous kids” in the world. “We are the original storytellers and we can make it here as well,” he said. It’s a sentiment that Dennison – of Waikato iwi Ngāti Hauā – agrees with: “We are diverse, we have stories.”

Waititi, of course, is an inspiration for Dennison, who also lists Lee Tamahori and his grandfather – Māori writer and activist Bruce Stewart – as people he looks up to. Cliff Curtis is someone he’d love to work with. “I enjoy seeing New Zealanders succeed,” he says.

Now he’s starring in one of the precious few Covid-era blockbusters set to give the struggling box office a boost, a call from Cliff Curtis can’t be too far away.