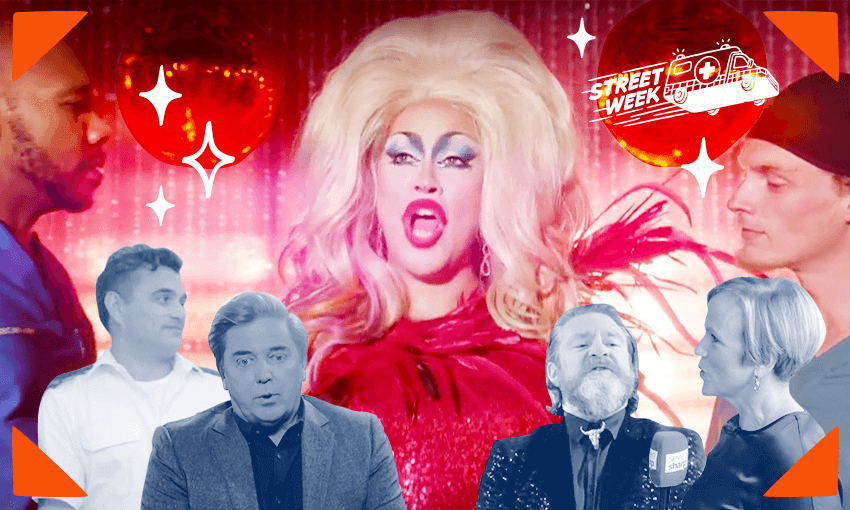 Is it you or is it me, or has this week on Shortland Street been a week unlike any other? Alex Casey recaps an ambitious and genre-bending few days in Ferndale.

For the last three nights, Shortland Street has been putting on the absolute ritz in celebration of the last three decades. There’s been deaths, tears, a wedding, umpteen celebrity cameos and even Hilary Barry door-stopping Chris Warner with a Seven Sharp microphone. If you haven’t been watching, I can’t recommend highly enough that you catch up on demand for a genre-bending reminder of why this soap remains our most ambitious and essential local series.

But if you are short on time and, for example, are currently being paged to ED to save yet another woman who has been impaled by a tree branch, here are the highlights from a bonkers few days.

Merging with the powers of Seven Sharp on Monday and Tuesday night, Shortland Street casually slipped into pseudo-documentary style. Host Hilary Barry went into the belly of the beast to check in with New Zealand’s most headline-grabbing hospital, and the results were stunning. Part Seven Sharp, part Paramedics, part The Office, the handheld cameras wobbled harder than Chris Warner on a flying fox and the booms were as obvious as a rude word on a humble fridge. Our characters spoke down the barrel of the camera about the reality of life in the hospital, all while trying to save the lives of the impaled, the drug-addled and the fingerless.

… and there were a LOT of The Office glances to camera

Congratulations to all the winners of the Jim Halpert Medal / Tim Canterbury Prize.

Who better to introduce our people today, every weekday since 1992? Jeremy Wells opened the two night special with an earnest monologue about “a very, very, very special someone… A Kiwi institution… a hospital.” Why does Shortland Street matter, he asks himself. “Because 30 years ago it started as a brave experiment bringing together the best in private and public healthcare,” he answers himself. “Those highly trained heroes are just humans, like you and me, they make mistakes, some even screw up badly,” he says, as somewhere out there Chris Warner opened a new email to his lawyer. “Allegedly, I hasten to hasten to add.”

“I am a florist because I sell flowers and a fossil because I am a Friend Of Shortland Street Including Leanne.” Mwah.

… Including Rangi and the Ferndale Strangler?????

I’ll have what they’re having! (Eternal life, vg skincare routine…)

TK and Hilary Barry bonded over bean counters not once…

And Chris Warner did NOT get off as lightly

There were spaced-out teens on shrooms…

Someone’s been counting their beans, if you catch my drift.

And a sick medieval themed stag do

Nobody knows how to party more than IT expert Damo, whose stag do included cosplay, a male stripper (Boyd Rolleston) and a one-line cameo from Clarke Gayford. And what better way to end the night than to fall asleep in a plate of chillies, waking up with an allergic reaction and no choice but to wear a sequinned Phantom of the Opera mask to your own wedding. Clas-sic Da-mo.

The drag wedding was magical

Desi and Damo tied the knot on the stage of the Hollywood Cinema, complete with a naughty nurse drag show featuring Madonna (not that one), a heckle from Leanne (that one) and someone extra special…

… BECAUSE IS THAT A BEDAZZLED LIONEL????

And things ended in a suitably grand finale performance

The 30th birthday episode ended in a glittery extravaganza complete a jazzy rebooted theme song performed by Bella Kalolo (lipsynched by Desi) and OG legend Tina Cross. In the words of a tearful Chris Warner, it felt like the perfect escape, a dazzling and unabashedly cheesy celebration that laughs in the face of the last few years in Ferndale – and here on Earth in Aotearoa.

“It’s felt dark, and hopeless, like there is no light, but there always is,” Warner said in a rousing closing monologue that DIDN’T make me cry because I was TOO BUSY counting beans. “We just have to hold on and look for the small moments of connection, of love, of humour and embrace them, hold onto them, treasure them, because that’s the wonder of it all, isn’t it?”

Here’s to 30 more years of this beautiful and bizarre cheese dream of a show.