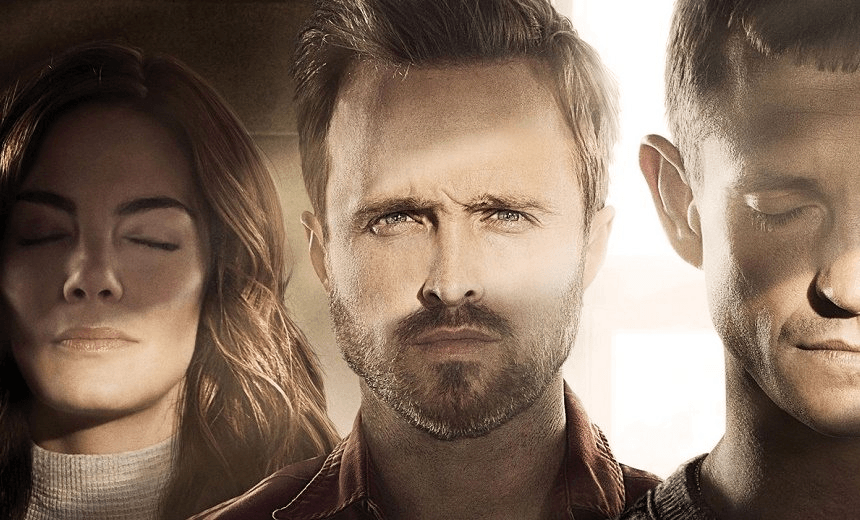 People keep saying The Path is a TV show about Scientology. Hayden Donnell sets out to demolish these false prophets and their suppressive allegations.

Last weekend I snuck into Scientology’s new headquarters in Auckland. During my two hours inside, I was infused with new depths of knowledge about the perils of psychiatry, the drugs enslaving us all, and the path across the Bridge to Total Freedom. I watched the ecclesiastical leader of the Scientology religion, David Miscavige, up close, and saw his teeth gleam like a tunnel to heaven.

That’s why I’m here to set the record straight about The Path.

People keep saying this show is about Scientology. It features Breaking Bad’s Aaron Paul as a husband questioning the teachings of his religious sect, which is known as Meyerism. Michelle Monaghan plays his more spiritually devoted, and increasingly suspicious, wife.

The lying MSM says it has a lot of parallels to the intriguing science-based religion followed by celebrities such as Tom Cruise, Giovanni Ribisi, and Kirstie Alley. Show creator Jessica Goldberg was recently forced to set the record straight. “The Internet is full of misinformation,” she claimed, saying Meyerism was her attempt to invent an “ideal” faith.

One thing it definitely is NOT, is a show about Scientology. Just look at the evidence.

This is the symbol of Meyerism.

As you can see it’s very different to the symbol of Scientology.

There are no similarities.

In The Path, Meyerism is founded on the teachings of Dr Steven Meyer: an enigmatic visionary who wrote the sect’s founding document The Ladder. Its acolytes believe his teachings are infallible; that he is somehow blessed by the Divine light. However, it later emerges Meyer is secretly dying.

That may sound like Scientology founder L Ron Hubbard, a science fiction author who wrote Scientology’s founding document Dianetics. But think about it. L Ron Hubbard is dead, not dying.
Quite different!

Roberts is violent; prone to punching people who displease him.

In the absence of L Ron Hubbard, Scientology has been driven forward by a highly ambitious, shiny-toothed leader called David Miscavige.

He’s been accused of punching employees who displease him. However, no-one’s filmed David Miscavige punching someone and put it on a TV show created by Hulu and shown on Lightbox.co.nz. He’s denied all the allegations against him. Also he’s named David, not Cal.

Meyerism’s Bible is called The Ladder. To progress in the religion, you have to advance up through the rungs of the ladder.

Scientology’s Bible is called Dianetics. To progress in the religion, you have to advance through the levels of Operating Thetan and cross the Bridge to Total Freedom.

Meyerism is anti-medicine, with adherents blaming many of the world’s ills on rogue doctors.

Scientology is anti-psychiatry. Its disciples believe psychiatrists are poisoning the world by shackling them to drug addictions. At the opening of the church’s Auckland Ideal Org, Miscavige joked about not suffering psychiatrists to operate “above the ground”, which would leave them free to work only in wells or gold mines.

The point is Scientologists are opposed to psychiatrists, which is different to being opposed to doctors.

Meyerism ruthlessly pursues and harrasses former followers who turn against the church.

Your constant allegations are starting to really disappoint both me and series creator Jessica Goldberg, who has repeatedly and very clearly stated her show is NOT based on Scientology.

I’ve spelled out the differences for you.

I’ve given you a chance.

If you’re going to carry on this way, I’m sorry but I have no choice. Unfortunately I’m going to have to declare you a suppressive person.