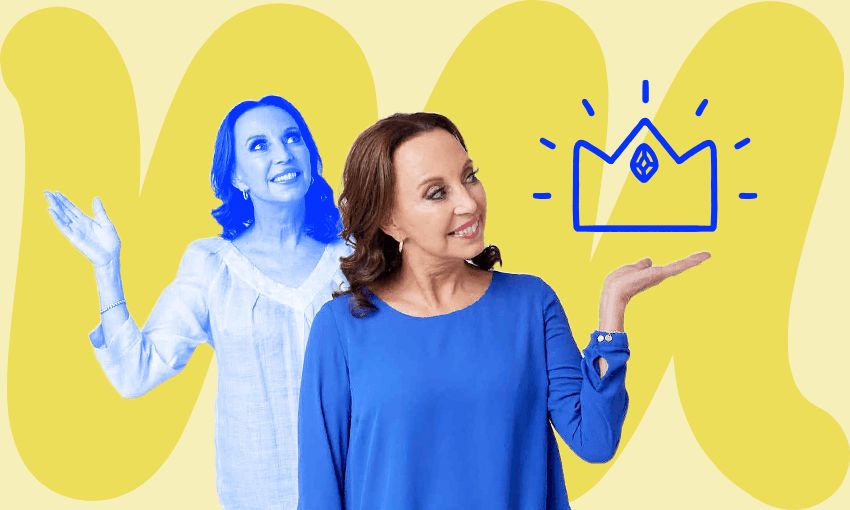 New Zealand’s infomercial queen has ditched TV for the greener pastures of social media. She tells Tara Ward all about her latest business venture.

In an ordinary car park on an ordinary day, Suzanne Paul was about to do something extraordinary. Holding an electrical cord in each hand, she connected the two and suddenly lifted a two-tonne SUV off the ground using only the power of her brand new product: a super-suction vacuum cleaner.

Six years have passed since the day Paul sucked a truck off the ground, but she has fond memories of this iconic moment in New Zealand television history. She laughs down the phone from her office in Auckland remembering how kids especially loved that vacuum cleaner infomercial, as well as the one where she drove a steamroller over a mattress. She also promises me the vacuum’s superior suction really did lift the SUV off the ground all by itself.

Suzanne Paul is New Zealand’s undisputed infomercial queen. Born and raised in England, she worked all over the world for 20 years before she came to New Zealand and discovered a new beauty product called Natural Glow. She knew she was on to a winner straight away.

Her first television ads in 1992 were adapted from the Natural Glow demonstrations she gave in shopping malls, but networks baulked at the two-minute format. “They said ‘We can’t play a long advert, nobody’s going to watch it. They’ll go to the toilet or make a cup of tea’.” Paul persisted. She knew her product, and she knew her audience. “And a whole new thing was born, wasn’t it? The whole direct marketing thing was born from that.”

In the years since, Paul has covered us in thousands of luminous spheres, appeared on a multitude of reality series like Celebrity Treasure Island and RuPaul’s Drag Race Down Under and presented her own television shows, including Garage Sale, Second Honeymoon and the much-loved and “career highlight” Guess Who’s Coming to Dinner.

While television viewers these days are familiar with reality TV, back in 1998 there was nothing else like Guess Who’s Coming to Dinner on our screens. “It was very scary, because me and Anthony Ray Parker would knock on somebody’s door and we would say ‘Surprise! Guess who’s coming to dinner! We’re coming into your house to film a TV show that you know nothing about!’”

Guess Who’s Coming to Dinner involved Paul bursting into strangers’ homes with a chef and stylist to get a family “zhuzhed up”, before a local celebrity like Jonah Lomu or Temuera Morrison joined them for a meal. Like a lot of 90s reality television, it was completely bonkers and hugely popular. “Honestly, I think I only got away with it because they knew me, because when they opened the door they’d be like ‘Oh Suzanne Paul, what are you doing here?’,” she says. It was a level of trust that has followed Paul throughout her career. The show ran for several years, and Paul jokes that the series only ended because they ran out of celebrities.

People still talk to Paul about Guess Who’s Coming to Dinner, and her epic Dancing with the Stars win in 2007 (“I’ve only got to hear that theme music and my stomach turns over”), and the classic Blue Monkey dance video. There’s no shortage of remarkable Suzanne Paul moments from the past 30 years – she has a knack for reinventing herself and popping up where we least expect her to, like in an episode of Outrageous Fortune or a back alley to rap about stranger danger.

“Gosh, that was great! ‘Stranger danger, he’s a lolly exchanger’,” Paul laughs as she recalls her unlikely 2010 rap duet with Scribe, a moment that’s as far away from the Suzanne Clip as you can get. “He gave me my rap name, which is extremely amusing, and a sign that I do. Suzy P. Suzy P in the house. One of his lines: ‘She’s a Natural Glow ho’.”

But Covid-19 changed everything for Paul, and not even a super-suction vacuum could lift business after the first lockdown hit. Trade shows and exhibitions were cancelled, opportunities to demonstrate products in malls and stores disappeared, and daytime shows like Good Morning and The Cafe – the spiritual home of the Suzanne Paul advertorial – were no longer on air.

Paul had products to sell, but suddenly there was nowhere to sell them. “I thought, well, is that me retired now?” she says. “Within a very short space of time, a job that I’d done really well for 50 years didn’t exist anymore. It wasn’t there. And I knew of so many other companies like myself, and I thought, if I don’t do something, who would?”

She vowed to never again be in the position where she couldn’t earn a living doing what she loved, and tried to find a solution that used her knowledge and skills to help other businesses. “I’m not the sort of person just to sit about and moan about how things are and wishing things were how they used to be,” she says. The obvious answer was to sell on the internet, particularly after online shopping “took on a life of its own” during lockdown.

After discovering 40% of New Zealanders watch YouTube daily, Paul created PitchMe Online, a new YouTube channel where small and medium businesses join her in the studio to showcase their product or service. PitchMe Online writes, films and edits a four-minute YouTube video (also shared on Facebook, Instagram and TikTok) that introduces consumers to different products, giving them all the information they need before they purchase. The channel launched in May, and Paul says the response has been overwhelmingly positive.

“It hasn’t been done in New Zealand before, this type of online shopping where companies can come in and sell their goods, especially with someone like me,” she says.

Anyone can employ Paul to help promote their business, and after spending the last 30 years gaining the trust of New Zealanders, she believes her familiar presence will reassure customers. ”I know these people, I’ve got the product, I’ve tried them. You can be confident with what you’re going to get,” she says, and while nobody’s sucking a truck off the ground, Paul tries to make every video fun and interesting. “I call it shoppable entertainment. You know, my adverts have never been boring, and people like them.”

So far, PitchMe Online products have included pet beds, air fryers, and a company that puts flat-pack furniture together, but regardless of what she’s selling, it’s likely to be Paul’s energy that will have you reaching for your wallet. She’s as passionate about selling in 2022 as she was in 1992. “I’ve stood on blimmin’ street corners and sold, I’ve worked markets, exhibitions, shopping malls, TV, online. Selling is selling. It’s just got to be passionate and exciting. People want to see that,” she says.

“I remember people used to say to me: ‘I’ve no idea what a luminous sphere is, but you’re so excited about them, I want some as well’.”

Paul is now meeting a new generation of shoppers whose childhoods were filled with her Natural Glow and vibrating massage pillows. They tell Paul they remember watching her on television with their mums, quoting “thousands of luminous spheres” and “but wait, there’s more” to her. It means a lot to Paul. “It’s happy memories for them, it makes them comfortable. It feels like home. I’ve been in their lives for so long.“

The world has changed a lot since 1992, but Suzy P has changed with it. Not all her business ventures have been successful and not all her products a hit, but these days Paul gives motivational talks on resilience and adaptability. “I’ve lived in a lot of countries, I’ve done a lot of different jobs, and I just try and go with the flow and reinvent myself as quickly as I can,” she says. That adaptability has seen Paul write her autobiography, act on stage and even try stand-up comedy, an experience she describes as “terrifying”. Soon, she’ll appear in the second season of RuPaul’s Drag Race Down Under and in a drama with Lucy Lawless, suggesting that versatility might just be Paul’s most enduring product of all.

After all those achievements, what else is left on Suzanne Paul’s bucket list? She’d love to appear in a movie, but her current goal is for PitchMe Online to become the place New Zealand shoppers instinctively turn to when they need to buy something. She’s fully invested in making her new venture a success. “That’s my dream, that’s my ambition. When you try something 100%, it really is a powerful force. When you just live it and breathe it, and when it’s everything and you give it everything, it’s quite powerful.”

But wait, there’s more: “If you love what you do, if you’re passionate about it and you could make money at it, then you’re having a great life. That’s all anybody wants, isn’t it?”