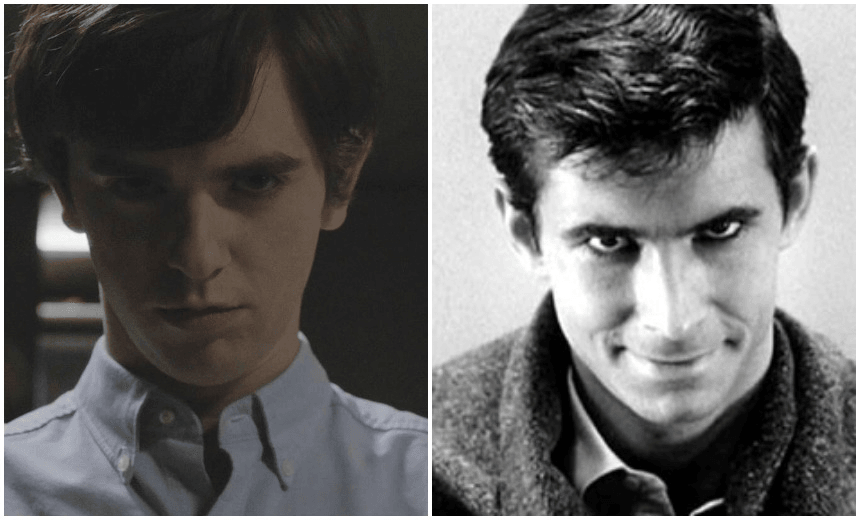 With the penultimate season on Lightbox this week, Alex Casey does a deep dive into Reddit to find all the Psycho references in prequel series Bates Motel.

As the Scary Movie franchise has demonstrated, nothing gets the party started like a pop culture reference, however slight or heavy. Bates Motel, both a prequel to and a reimagining of Alfred Hitchcock’s 1960s thriller staple Psycho, was described by our own Aaron Yap as “basically Norman Bates: The High School Years”.

Although it may appear to be pitched slightly younger, Bates Motel is packed with some incredibly dark themes, disturbing scenes and even a Rihanna cameo in the very latest season. As an ex-media studies student who watched Psycho more times than I can count, I peered through the scary internet peephole of Reddit to find the subtle (and not-so-subtle) nods to Bates Motel‘s knife-wielding forefather.

In Bates Motel we see yung Norm putting together his beloved taxidermied owl for the first time. In Psycho, it looms over him and Marion (a bit tattier mind you) in the infamous parlor scene.

The kid from Charlie and the Chocolate Factory has done a mighty fine job shedding the boyish Buckett charm for the sneering, heavy brow of Norman Bates. In the finale of season two, the shot paired up perfectly with the closing frame of Psycho. Hitchcock would be proud, and probably a bit angry tbh.

Nothing to see here…

Whether it’s fleeing your job with a satchel of stolen cash, or a completely subtle drug drop, the parallels between these two Guilty Denvers behind the wheel are absolutely unmissable.

Don’t you hate it when you put all this hard work into constantly fixing up and maintaining your motel showers, only to eventually have some dying harlot selfishly tear down the curtain? Unbelievable.

It will come as no surprise that the character of Norman, no matter what age, era or colour grading, is a total skeeze.

Trapped in the (water) closet

Psycho was the first film to ever show a flushing toilet on screen, a fact which is cool and hilarious and almost better than anything else it is heralded for. In Bates Motel, Norma takes a sneaky call in the bathroom and disguises it by flushing the unused toilet. Smooth criminal.

A lot on ya plate?

Bradley’s car has the SAME number plate as MARION CRANE’S car that took a swim in the nearby swamp in 1960. When will this madness end?!?!?!

Click below to check into Bates Motel on Lightbox, just mind the showers