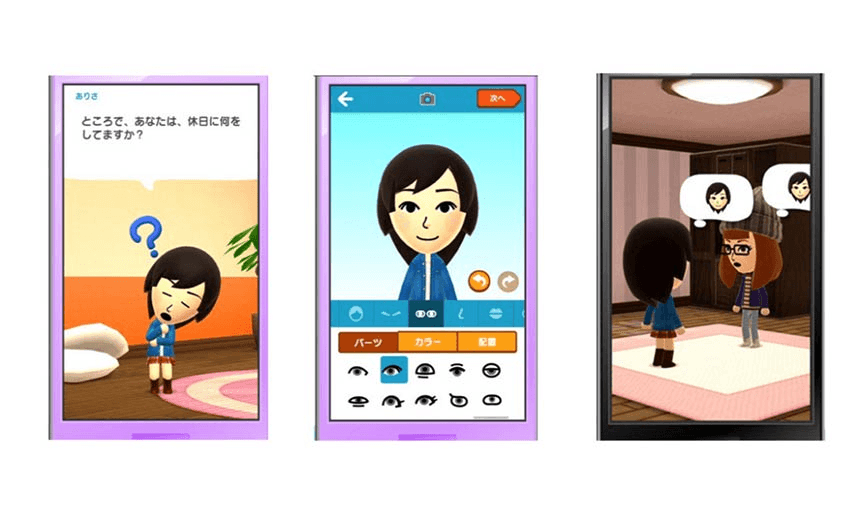 This week I played: Miitomo

Given Nintendo’s status as a kind of jovial, fun-obsessed Grandpappy to the video game world, it’s pretty remarkable that up until now they haven’t ventured into the omnipotent and big $$$ world of mobile phone gaming. They’re the all time masters of handheld, and classic Nintendo fare like Super Mario or Kirby’s Dreamland would seem to lend itself very well to the low stakes, pick-up and play nature of mobile smashes. For whatever reason, Miyamoto San and co have waited until now to invade the market. But what they unleashed was worth the wait. It’s Miitomo. And it’s cool.

Miitomo lurked in the Japanese App Store for a wee while, and word of it reached our shores before the app itself. The first thing I read about it was that it was hard to describe. A kind of weird Web 2.0 social media thing by way of 3ds’ MiiPlay functionality. Turns out it’s a great meme machine thing with equal opportunity for very earnest self-expression and funny mickey taking. It’s also currently mostly about doing very weird things, which I’m in favour of.

You create your Mii and add/interact with friends by recording answers to questions. You can also chuck your lil Mii into photos and make them interact with the new environments in a povo-augmented reality type way. Miis, the big head/stiff limb avatar system Nintendo developed for the Wii, were already cute, and this latest iteration takes things to new levels of customisation and positionality. They’ve added amazing text to speech stuff which is kind of terrifying, but mainly cool. Also at the moment Nintendo has chosen to leave it uncensored leading to this sort of funny stuff:

People are clearly bloody loving it. It’s already clocked up millions of users and managed to dethrone rainbow vomit induction service, Snapchat, from the top of Apple’s App Store charts. There’s good reason. It’s very stupid and very cool and should remain fun for at least a few weeks. Get it and enjoy the feeling of living in the surreal and pointlessly playful world of Miitomo before your extended family figures out how to use it.

This gaming post you’ve just read and enjoyed comes to your brains with help from Bigpipe, the one ISP that will never run around and desert you.