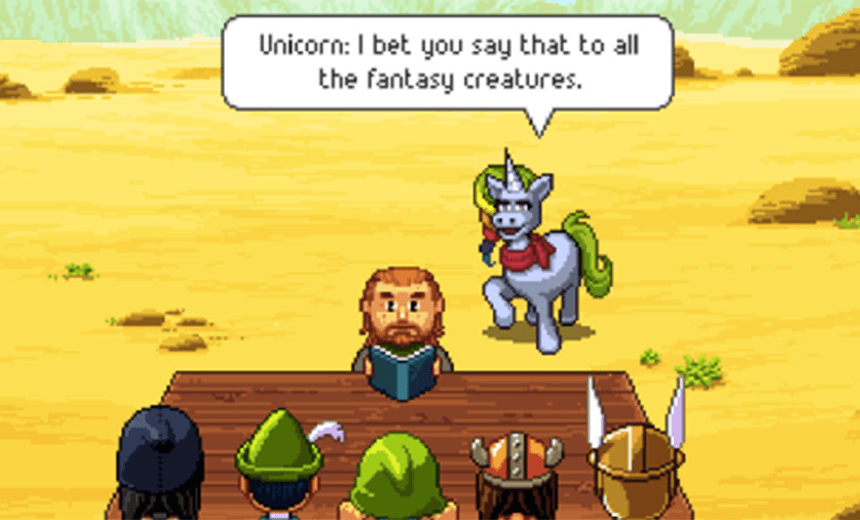 If the chore of cobbling together and interacting with real people for a roleplaying session is too much, Joseph Harper has the mobile game for you.

We all know Dungeons and Dragons and the Call of Cthulu etc are cool. There is almost nothing as good as putting on a bonnie wee Scotty boy accent and screwing up your face while pretending to be a 187 year old gnome who is convincing imaginary villagers to join a fight against a pirate menace that may or may not lead to mint magical items and gold. It’s great. But as anyone whose been the organiser person for weekly D&D sesh/indoor netball team/after-work lan party, it’s really fricken hard to herd a bunch of people because everyone has shit to do all the time. Enter Knights of Pen & Paper 2.

It’s your classic fantasy setting rpg. The twist here, is that you control a gaggle or roleplayers rather than the adventurers themselves. Your players sit at a wooden table with their backs to you as the game master (beardy) reads you through your quests and cracks wise with jokey npcs. It’s cute.

As the comptroller of your adventurers, you’ll explore dungeons, complete menial tasks for strangers, waste snakes and bandits for cash, and buy yourself treaties and weapons (loincloth, lettuce, hammer etc). As the game progresses, you’ll expand your party. The game employs a simplified class/race system. You can employ humans, elves, and dwarves as warriors, mages, clerics, paladins, hunters and thieves. There’s also an added wrinkle where you decide the character of the person playing each adventurer. You can select various John Hughes type teenager archetypes (jock, cheerleader, goth etc etc). It’s all cool and meta.

It’s nowhere near as involved as your standard tabletop role playing game. Hardouts will maybe find this dumb and bad. Also, if you’ve ever played an rpg (videogame or other), you’ll probably find the early stuff very easy. But Knights of Pen and Paper is pretty clever and is self-aware enough to keep it enjoyable. It costs like $7.50 so it’s pretty pricey for an app game, but if you’re rich and enjoy this kind of thing, it’s an excellent avenue to getting your dungeon crawling, monster bashing fix while using the toilet at work.

This velvet bag of many sided die is brought to you by Bigpipe, the ISP that always rolls a critical strike.