Apulu Reece Autagavaia was among those who yesterday packed into Auckland Town Hall to witness the formal apology for the dawn raids. He explains the significance of the ifoga custom and what he hopes will follow this landmark event.

Last night, we witnessed the prime minister Jacinda Ardern perform the ifoga, a Sāmoan custom of asking for forgiveness.

Ifo means to bow down or lower oneself. Ifoga is when an offender covers themselves with a Sāmoan fine mat as an atonement for their or their kin’s wrongdoing. The covering occurs in front of the house of the victim. It is then up to the victim and their family or village whether to accept the ifoga. This can take some time, to allow the offender to pause and think about their actions while in the darkness, as well as time for the victim and their family to consider the future impacts of their decision, whether to accept or not. This is a public gesture before the entire village, as witnesses of this act of forgiveness.

In Sāmoan culture we talk about the “va” which roughly translates to relationships. When there’s an offence committed, that is called “soli le va” or trampling on the relationship.

The Sāmoan fine mat is referred to as many names. One such name is “tasi ae afe” which can mean one act can affect a thousand. This refers to the act of atonement by the offender, which can forgive many others, including the offender’s family, extended family, and village. Jacinda Ardern remained under the fine mat for at least 10 minutes before it was lifted off again. (Photo: Justin Latif)

Another name for the Sāmoan fine mat is “pulou o le ola” which means being covered to gain life. This refers to the origin of the Sāmoan fine mat, where in one version, girls from the district of Amoa were weaving the very first fine mat. They were abducted and taken to Tonga where they ran into some controversy and were accused of hiding the King of Tonga’s brother. In pleading for their lives, the girls covered themselves in the fine mat they had woven.

Last night’s actions are unheard of by a world leader. Her compassion and humility was beautiful to watch, in particular when you consider Jacinda Ardern was not alive when the dawn raids occurred. This reflects that acts of cruelty have a generational impact. But, also, in Sāmoan culture, it’s never too late to “teu le va”.

And so, last night we heard from Jacinda Ardern attempt to “tausi le va” or nurture the relationship, broken by the dawn raids, with announcements of funding for scholarships and leadership assistance for Pacific nations and communities. It was deeply moving to see the minister of pacific peoples, Aupito Toesulusulu Tofae Su’a William Sio, in his full Sāmoan attire, namely his tatau (full body male tattoo). Aupito was representing not only the government of the day, but also those in the past: ministers, police and immigration officers directly responsible for the dawn raids. He stood there, staking his to’oto’o (staff) into the stage ground, which was an act of calling for his family and ancestral support – his father was sitting in the front row –and a beautiful act to watch. Aupito also waved and struck his fue (orator’s whisk) in the air, to call upon the ancestors for wisdom and guidance for this momentous occasion.

Aupito’s stance and physical presence was matched by his eloquent words. He called upon the nations to the north (Tokelau, Kiribati, Hawaii), to the east (Cook Islands, Tahiti, Rapa Nui), to the west (Tuvalu, Fiji, Futuna & Uvea), and then to the south (Tonga, Niue and Aotearoa). He called on the spirits to come and heal our communities, with a focus on strengthening the generations to come.

Aupito used the Sāmoan phrase, “E pala ma’a, ae lē pala upu” which means rocks and boulders will crumble, but words and promises last forever. This was accompanied with the Sāmoan custom of “ta’i le sua” which is the highest form of gifting in Sāmoan culture. The promises made by Jacinda Ardern were written on scrolls and gifted to the Pacific communities to show that words matter. Our cultures are oral cultures, and these words will be passed on from generation to generation. Aupito pulled out the important parts of this custom to show how genuine the government was in the gifting, while acknowledging racism still exists today.

These are unprecedented actions, which Pacific communities respect and show gratitude for. 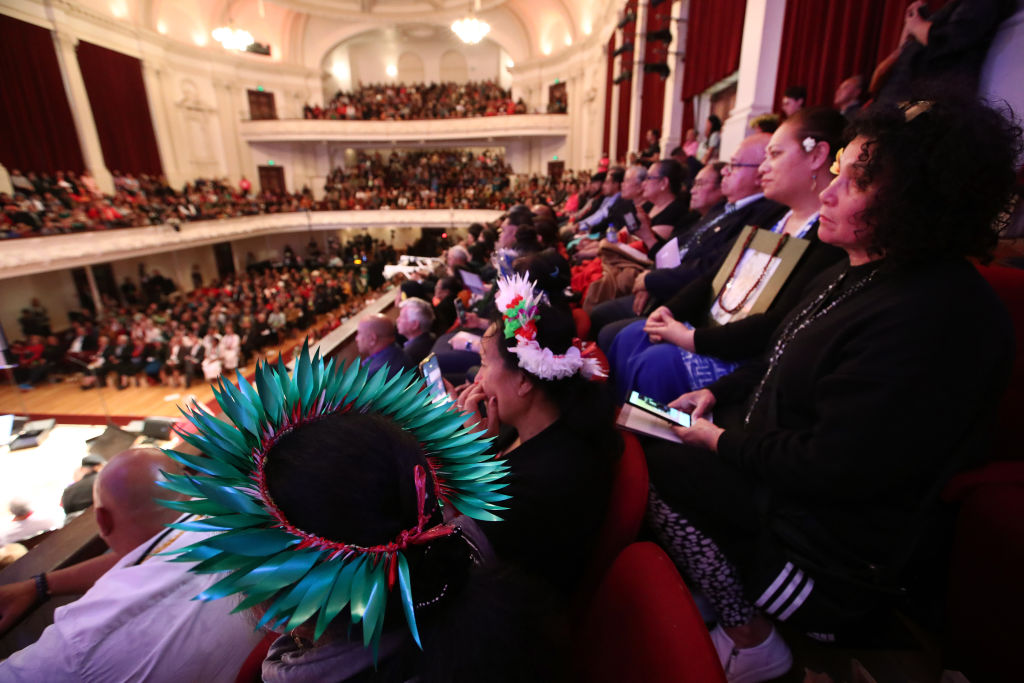 The Auckland Town Hall was full for the dawn raid apology. Photo by Fiona Goodall/Getty Images

Speaking personally, I have so many emotions running through me that it will take a while to fully comprehend the impact of this apology. But I am humbled to have sat in that hall with my parents, and to witness this apology with them, knowing they lived through that era.

My mother has talked about how at the time of the dawn raids there was a chill that came over the Pacific community. No-one would go out in public. They stayed away from the shops. They wouldn’t socialise in public. There were hushed short conversations with passers-by, then straight home. There was real fear in people’s eyes as authorities were empowered to stop anyone who didn’t look white. During that time our family home in Grey Lynn was also raided, in that cold freezing dawn.

And so Sunday was the start of the re-warming of the cooled relationship which hung over our communities. I’m hopeful that under this government it could get hot enough for an amnesty for overstayers. The beautiful thing about “tausi le va” is that our relationships can grow and expand, so perhaps it could expand into a future amnesty? Let’s wait and see.

For now, your ifoga has been accepted.

Apulu Reece Autagavaia is chair of the Ōtara-Papatoetoe Local Board and a Sāmoan community leader in Auckland.