Small Ōtepoti label Karaoke Superstars has gained a cult following on social media for its distinct motocross-meets-goth hoodies and t-shirts. Charlotte Muru-Lanning talks to Rosette Hailes-Paku, the designer behind the brand.

Dressing up in her mum’s ever-growing collection of vintage dresses as a child sparked Rosette Hailes-Paku’s fascination with fashion.

Now 23, Hailes-Paku helms Karaoke Superstars – a small, slow fashion brand based in Ōtepoti/Dunedin. Each one-off piece, with its chaotic prints and visible stitching, is designed, sewn and printed by Hailes-Paku, usually while she listens to 80s music. Her collections are heavy on hoodies and oversized t-shirts – a mirror of her own everyday style.

After finishing her honours in fashion design at Otago Polytechnic in 2019, Hailes-Paku picked up a retail assistant job at Glassons to fill the gap before her planned move to New York City. But as it was for many, those overseas plans were foiled by the pandemic.

“That kind of got me down,” she says. So she handed in her resignation and began setting up her own label, which she now sells through her own website and various brick-and-mortar stores.

When it came to naming her brand, she took inspiration from her youngest sister, who while at primary school entered a series of singing competitions named Karaoke Superstar. The medals she won still hang in the bathroom of her parents’ home.

Now Dunedin based, Hailes-Paku grew up in Motueka, just outside Nelson. Through her dad, she has whakapapa to Ngāti Kahungunu and Ngāi Tuhoe. That side of her whānau live all around the North Island.

Until recently, the Cook Strait that separates the South Island, where Hailes-Paku has spent almost all of her life, and the North Island of her dad’s whānau represented a very real feeling of disconnection with her Māori whakapapa.

“When I try to learn more I find it really hard because I get so embarrassed that I don’t really know anything.” But, she adds, “My family isn’t judging me because of that, it’s myself making me feel like that.”

Despite the weight of that feeling of whakamā, she’s been finding ways back in through reading and connecting with the ever-growing community of young Māori creatives on social media. Most significantly, over the summer she travelled to visit her whānau in Wairoa, who she didn’t grow up around but who have embraced her. “It’s been really nice to be able to reconnect and actually learn more about where I’m from,” she says.

Lately, she’s started researching korowai and raranga and is hopeful she’ll find ways to incorporate traditional Māori design into her own work. But she says for now, “I’m just so aware of how little I know, and I don’t want to do anything wrong.

“That’s going to be a process that I’m going to have to slowly work away at to feel comfortable.”

In contrast to the eye-catching shard-like graphics and cutting fluorescent colours of her output, Hailes-Paku is softly spoken and thoughtful. Most times we chat on the phone, Hailes-Paku is sewing. One time she’s furiously putting together a last-minute organza dress complete with a corset top, for an event later that night.

There’s a definite Dunedin inflection to the clothing Hailes-Paku creates. “My mum’s family is from Dunedin so I did actually spend a lot of time here when I was a child – it’s kind of like a second home to me.” The city is replete with gothic and punk cultural influences that are translated into the prints and occasional leather and metalwork, romantic sleeves and ruffles Hailes-Paku incorporates.

The motocross aesthetic Hailes-Paku and her three siblings grew up with runs through her pieces too. Proportions are reminiscent of those blocky styles worn by riders. Clashing, splatter-like dyed textiles call to mind sprays of mud. In fact it was only when her brother pointed out the similarities that Hailes-Paku started to see the parallels. 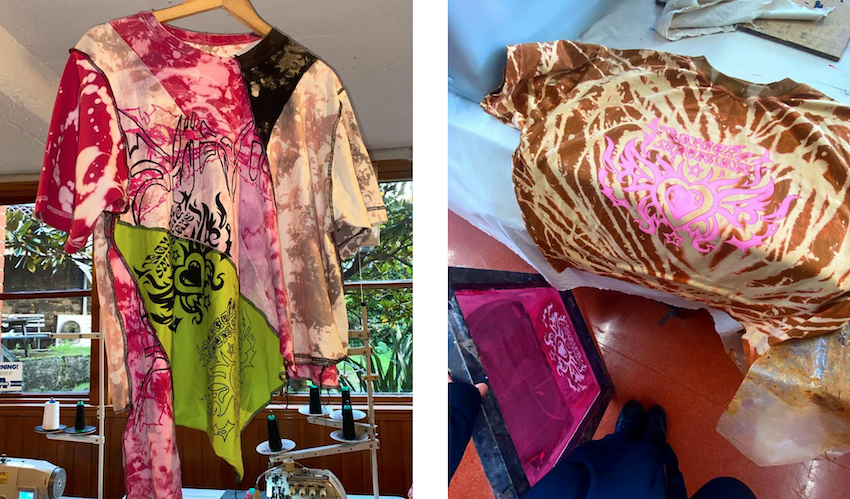 Success within the global fashion industry is notoriously nepotistic, and it’s not much different in Aotearoa. It’s a competitive industry that can be hard to crack if you don’t come from a particular brand of privilege; it helps to be wealthy and it certainly helps to have close connections in the industry. That means capital to set up your brand. It means friends and family who can afford to support you. A foot in the door is always a lot easier when your friend has the keys. As a result, it’s small wonder there’s so little diversity within the industry.

Hailes-Paku grew up comfortably, but she didn’t have the affluent background that’s common among those who make it in the fashion world. While this can make breaking into the industry more difficult, it’s also encouraged Hailes-Paku towards a certain type of creativity that she uses to her advantage. She can’t afford expensive fabrics so she reuses scraps of fabric or reworks older garments, “which is more sustainable, more fun, more interesting”. And she makes everything herself.

When Chloe Hill, contributing fashion editor at Viva magazine, messaged out of the blue earlier this year to ask Hailes-Paku about featuring a few Karaoke Superstars pieces in the magazine, she initially thought it was some kind of scam.

As the June issue of the magazine hit the shelves of supermarkets and dairies, it created a flurry of interest in her already in-demand pieces. Hailes couldn’t even afford a copy of the magazine, so her ex-lecturer Simon Swale bought it for her.

“It’s so hard trying to get enough money,” she says. “Every time someone buys something I’m like, ‘yus, I can buy dinner’ or ‘I can buy some more fabric to make something else’.

“I feel like a lot of people don’t know the amount of work that goes into clothing, especially because there’s so many fast fashion brands these days,” she says.

Because of fickle trend cycles and the pervasiveness of fast fashion, Hailes-Paku believes there’s a fixation on the end product on the rack, instead of everything that went into making it. “People can buy things so cheaply, because they’re being made overseas by people who are getting paid like nothing,” she says.

“That really devalues clothing and it’s really annoying as a designer doing everything myself.”

She’d love to see more fashion scholarships and funding for Māori and Pasifika students. “It’s really difficult to get any funding for fashion-design-related projects in New Zealand,” she says. “Most creative funding platforms will fund everything but fashion.” As she grows her own brand, she’d like to offer opportunities to emerging Māori designers through scholarships or internships.

Inspiring teachers and mentors have propelled her through the world of fashion – from her “amazing” textiles teacher at her small Catholic high school to Margo Barton, head of fashion at polytech, who has been “so supportive”. It was Barton who encouraged Hailes-Paku to enter the influential ID emerging designers show in 2019.

“She made me sit down one day until about nine o’clock because it was the night before the applications closed.” Hailes-Paku didn’t want to enter, mainly because she didn’t think she had a chance. “I was kind of just applying to get her off my back.” To Hailes-Paku’s surprise, she ended up winning the “most commercial collection” award.

The uncertainty of the future can be intimidating for Hailes-Paku. But she’s sure about  one thing – she’ll always make clothes.

“When I think about what I’m going to make in the future, the skills I’m going to learn over the years – it just makes me really excited.”