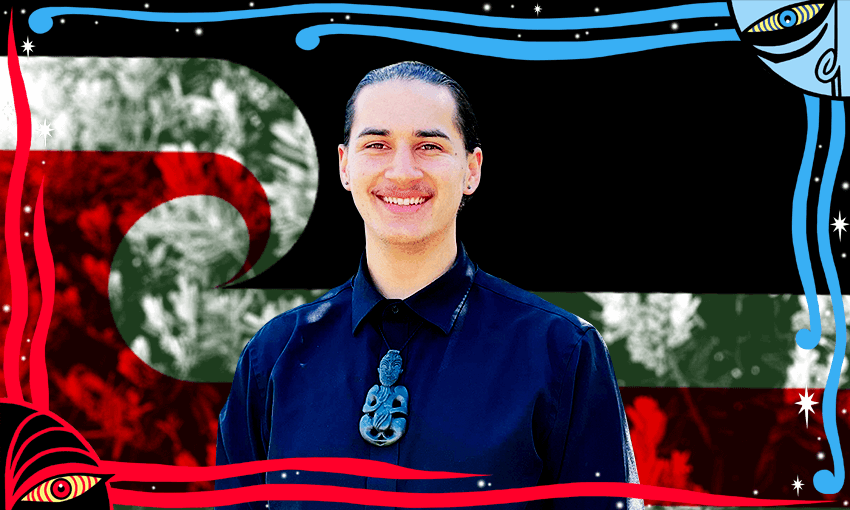 ‘Matua Moana made me want to be a thinker, an educator, an organiser and a doer’

As Aotearoa mourns the passing of Moana Jackson (Ngāti Kahungunu, Ngāti Porou, Rongomaiwahine), law student Safari Hynes tells Nē how the man revered by many as ‘the conscience of the nation’ changed his life.

The outpouring of aroha from across the country for Moana Jackson, revered indigenous rights lawyer, philosopher and “conscience of the nation”, as he was described by Ani Mikaere in her whaikōrero at his tangihanga, speaks to the impact he had on so many.

Over the past week, thousands across the country paid tribute to the late Moana Jackson in person at his tangi, while social media has been flooded with quotes, videos, stories and messages from those who were inspired by his work and the way in which he carried himself.

Victoria University law student Safari Hynes, of Rangitāne and Ngāti Kahungunu, was one of those whose life trajectory was altered by Matua Moana.

“He made me want to be a thinker, an educator, an organiser and a doer. He made me want to educate and organise our people to completely transform our constitutional arrangements to reflect our status as tangata whenua.”

An internationally renowned indigenous rights lawyer, Moana Jackson helped author a number of landmark documents, including the United Nations Declaration on the Rights of Indigenous Peoples (UNDRIP), and Matike Mai Aotearoa, the latter of which was formed with the intention:

“To develop and implement a model for an inclusive Constitution for Aotearoa based on tikanga and kawa, He Whakaputanga o te Rangatiratanga o Niu Tireni of 1835, Te Tiriti o Waitangi of 1840, and other indigenous human rights instruments which enjoy a wide degree of international recognition.”

These reports have helped educate the Crown of their roles and responsibilities to Māori, as well as support Māori to understand the impermeability of those rights under Te Tiriti o Waitangi and how that might be applied through the legal system.

Moana Jackson was the voice of reason for Māori in our struggle for self-determination, but he also offered non-Māori the chance to understand their own privileges in the historical backdrop of Māori being disenfranchised from land, culture and heritage.

When word came of his passing, Hynes offered his support to Matahiwi marae, sitting on the paepae throughout the tangihanga last week. He played a helping role in picking up koha put forward by manuhiri, and supporting waiata of hau kāenga, while having a front-row seat to the demonstrations of aroha conveyed by the multitudes who made the journey to pay tribute.

At the request of Moana Jackson, wāhine Māori were encouraged to speak on the marae ātea at his tangihanga on Matahiwi marae. A number of iwi maintain this practice, where many other iwi have tikanga around the protection of wāhine and whakapapa. The mana of his dying wish was honoured with an unprecedented number of wāhine Māori speaking on the marae ātea over the course of the tangihanga.

“The number of wāhine that spoke on the marae was beautiful. Having not seen that before, it was amazing,” says Hynes. Watching the rōpū Asians for Tino Rangatiratanga speak on the paepae illustrated his impact not just on Māori, but on tauiwi as well. It was amazing seeing all the different people he touched from all around the motu, from the Māori nurses, to Ihumātao, to Ngāti Wai who came to acknowledge his help with their kaupapa,” says Hynes.

In terms of articulating tino rangatiratanga and the rights of tangata whenua, Moana Jackson was the godfather.

“It was so beautifully put by whaea Ani Mikaere, he was the conscience of our nation. He was the lead thinker and kept us all on our toes.”

His calm and composed presence would draw people in to engage in every word, none of which were wasted or spoken in haste, but delivered methodically in a simple and direct way that could enlighten even the most feeble minds who challenged him.

“He was the personification of humility. He would put the effort in, where possible, to greet every person that walked into a room for one of his kōrero. He would always be thankful for emails and getting in touch with him. He was never concerned with receiving big awards, or titles, or being lauded by people. As a young, egotistical university student, he was and continues to be my example for how to behave and for how to carry myself,” says Hynes.

When others argued emotionally against Māori rights, claiming they’re no different to the rights of non-Māori citizens under Te Tiriti o Waitangi, Jackson would calmly respond with facts in a way that was effortless yet powerful.

It has been said by many young Māori lawyers that Moana Jackson was their inner voice, such was his leadership. For Safari Hynes, Moana Jackson was his exemplary role model, and will continue to be present in his thoughts.

“He is my hero. He’s who I’m trying to channel when I’m thinking, he’s the voice inside my head that says, “How can I look at this from another angle?” I’ll be asking myself ‘what would Moana think’ very often.”

His noble chieftainship outshone those who tried to challenge him, and his perspective on topics was a reassuring voice for Māori seeking to understand how to articulate our thoughts on mana motuhake.

“He once told me that belief was the worst thing colonisation took from us. He worked so hard to instil that belief back into all of us. The belief that our ways of living pre-colonisation and our entire being as Māori were sufficient for us. That we didn’t need to try and be like Pākehā, or use Pākehā systems, in order to thrive,” says Hynes.

Moana Jackson had the ability to shut down, in an educational and respectable manner, the most racist and ignorant arguments put forward by the foolish and uninformed who on many occasions attempted to challenge his expertise on Te Tiriti o Waitangi.

“He could take complex issues and draw upon the right analogies and stories to step-by-step help anyone understand and draw their own conclusions. This is a rare skill,” says Hynes.

An unparalleled thought-leader, Moana Jackson was one of the foremost speakers on race relations in Aotearoa, an exceptional articulator of Māori and indigenous rights and a beacon of unwavering truth for constitutional law in the context of Te Tiriti o Waitangi.

“I remember him telling me that law school and the work we’re doing [Tiriti work] is tough but to never lose sight of the bigger goals that we were fighting for. He’d often say ‘stay brave’, which I take as a whakahau for never compromising our beliefs or what we want, that our people have compromised enough over the last 180 years and that we must keep pushing for the absolute realisation of tino rangatiratanga.”

His passing has had a tremendous impact on many Māori and non-Māori, although his legacy will not be left in the dusty pages of history.

The Matike Mai report is one of the most important documents that has ever been produced in this country’s history, a process which Moana Jackson led.

“It’s very easy to get caught up in blaming the Crown for everything they’ve done and continue to do; what’s more difficult is figuring out how all of our hapū and iwi are going to fundamentally change the systems and structures of this country. We will ensure that this kaupapa he led and all others that follow in its wake will be realised.”

It was put forward at his tangi that the government include the teachings of Moana Jackson in the revised compulsory history curriculum.

Time will tell how the government maintains its role as Treaty partner to Māori, and how it honours the legacy of one of the most influential figures in the history of Aotearoa.