A new documentary from the director of Kaikohe Demolition is a visually stunning lesson in patience, writes Charlotte Muru-Lanning, who talks to Florian Habicht about how an almost 100-year-old Northland woman and her son drew him back into a genre he’d given up on.

“If you could take one thing from this life to the next life, what would you take?” director Florian Habicht asks from behind the camera.

The answer comes from James Cross, one of the two stars of a visually stunning new documentary that follows Cross and his mother Isey in the week leading up to Isey’s 100th birthday.

Habicht spent a week with the Ngāti Manu pair, following them in their everyday lives in Kawakawa in the far north. But nothing about the film, or Isey and James, is everyday. Their eclectic house is adorned with carvings found on Trade Me, handmade pillow covers, stuffed birds and streamers from parties past.

Almost-centenarian Isey may constantly look to the future – her philosophy is to avoid lingering in the past – but her clothing speaks to years lived. It’s a material record of her life, with 1980s-looking tracksuits and elegant shirts that could be from the 1960s. Nearly every outfit is punctuated with a hat. James, on the other hand, constantly refers to the past, in conversation and the way he adorns himself, often in korowai.

It was this impressive decor and style, along with the pair’s story, that drew Habicht back into documentary making. He’d previously vowed to give up on the genre after the lacklustre reception of his 2017 documentary Spookers. The plan was to make adverts to pay the bills, while working on his feature drama scripts.

Habicht first encountered the pair while filming Instant Kiwi commercials. James had written to the director asking him if he’d cast them in a commercial, promising that his mum would make Habicht her famous apple pie in return.

The three formed an immediate bond while making the ad. “I often hear documentary film-makers saying they spent a year with their subjects, you know, to earn their trust and feel at ease. But we kind of had that instantly,” says Habicht. This feature-length documentary came to be when James asked Florian if he’d film his mother’s birthday.

With just Habicht and the mother-son duo present for the filming, the result is profoundly intimate. This is achieved through the limitations of the filming process. Without any crew to record audio, Habicht relied on the camera microphone to pick up sound. This meant that often the camera was within a metre of the subjects, giving the sense that you’re in the space with them. 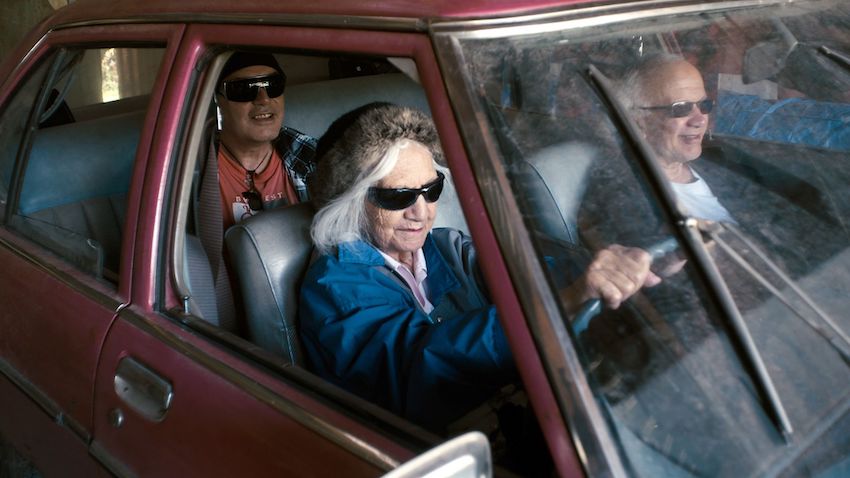 Because we don’t have a huge catalogue of local character-study films, James and Isey charts new ground for New Zealand documentary. In its depiction of the parent-child bond and its observational and participatory mode, it’s tempting to draw comparisons with the famous documentary Grey Gardens, filmed in East Hampton in 1975.

Unlike Grey Gardens, however, which depicts two reclusive and eccentric upper-class women who seem almost unreachable, James and Isey are relatable, warm and outgoing. Their rich personalities are key to the film’s success.

Isey is almost a comedian, reflects Habicht. “Her comic timing is just so spot on, she’s so funny,” he says.

“I just find them so rich, so deep, it’s almost like this film is the tip of the iceberg.”

The pair weren’t fazed by the presence of a camera. In a particularly memorable shot, Isey, wrapped in a Hello Kitty blanket aboard a fishing boat, stares nonchalantly back into the camera. “The camera was literally one metre away, and she just didn’t change one bit, she’s just completely natural,” Habicht says. 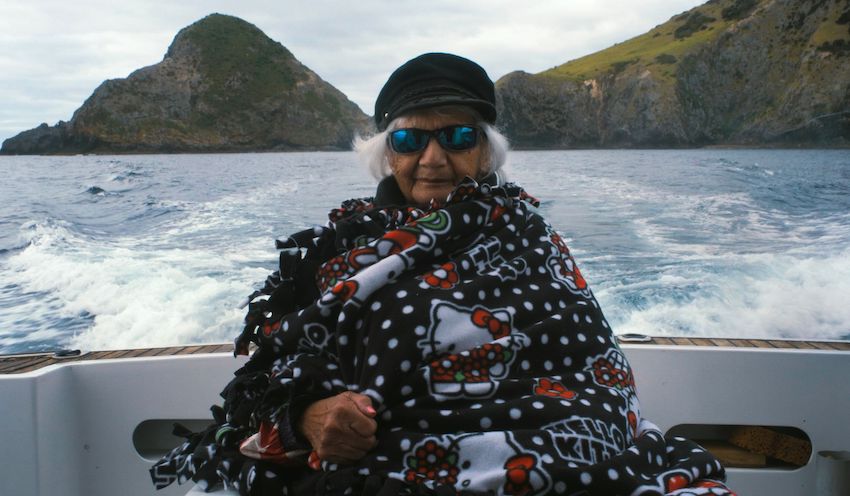 When the camera is this close, it’s hard not to feel uneasy about the idea of a documentary about Māori subjects made by non-Māori. Habicht, Pākehā, was born in Berlin and grew up in Northland.

The camera has too often cast a violent gaze over indigenous communities the world over, and Māori are protective of our people. Because of this many of us have justified and necessary reservations. Throughout our local history, Pākehā have represented Māori as outsiders to the New Zealand norm; as objects of clinical ethnographic research; aliens on our own whenua.

Whether representations of Māori are respectful or demeaning, they have too often carried a Pākehā perspective, owing mainly to the exclusion of Māori from positions of influence within our film and television industry. Habicht was aware of this going into the film’s production, he says, and James and Isey is in part a study into what it means for non-Māori to make a documentary on Māori.

To be honest, I initially felt uneasy about all of this, but after watching the film I got a sense of the aroha, gentleness and self-determination that are given to both Isey and James. Habicht has navigated the complexities of making such a film with generosity and care.

Tikanga was followed in a tangible sense; with koha given to marae and the kapa haka group that features in the film, and James and Isey will share in the profits. This may not fit neatly into western documentary ethics, but it certainly fits a Māori approach.

While it was just Habicht behind the camera filming, the post-production was a vital part of ensuring the film was culturally appropriate. “I’m probably a naive, backyard film-maker with good intentions,” Habicht says, “but when it came to the edit, a lot of thought was put into all those things, because it’s so important to do it justice.”

Vitally, experienced Māori were involved post-filming. Lani-Rain Feltham (Te Arawa) was brought on as co-producer, Mana Epiha (Ngāpuhi, Waikato) was the film’s tikanga consultant and Gregory King (Ngāpuhi, Mangaiti) was story consultant, while fluent te reo speakers were consulted and James and Isey themselves had a hand in the final edit.

Māori stories will always be inherently political. Explicit political themes are touched on in stories told by the pair, including the loss of te reo, racial profiling and state-enforced cultural suppression. In the context of the Covid-19 pandemic, during which the vulnerability of our older people has been thrown into sharp relief, James and Isey delivers an especially poignant political message about the importance of kaumātua and their wellbeing.

Isey has lived through two pandemics: a fact the film begins with, explaining in a caption that Isey was born on April 3, 1919, just months after the influenza pandemic hit Aotearoa. The suggestion to add this caption, along with others that give context to Isey’s life, came from Pulp frontman Jarvis Cocker, the subject of Habicht’s 2014 documentary, after he watched an early cut of James and Isey.

Aside from a few rare examples like long-running television show Waka Huia, kaumātua have often been neglected, at least as a central focus, in our local, mainstream media. That neglect is reflected in our approach more generally when it comes to policy and the norms around aged care. The dedication James has for looking after his mum and the esteem in which he holds her is refreshing and aspirational.

Often James and the film slow down to Isey’s pace; as she paints her nails pink, fishes for kahawai or eats McDonald’s with James by the water. It’s a lesson in patience we could all take on board.

Beautiful moments abound in James and Isey. It’s a true taonga of a film that shows an alternative to modern, western approaches to ageing, and how we look after our parents and grandparents. This in itself is radical and a demonstrably te ao Māori worldview, centring kaumātua, their wellbeing and those who look after them.

James and Isey is now screening in cinemas nationwide.