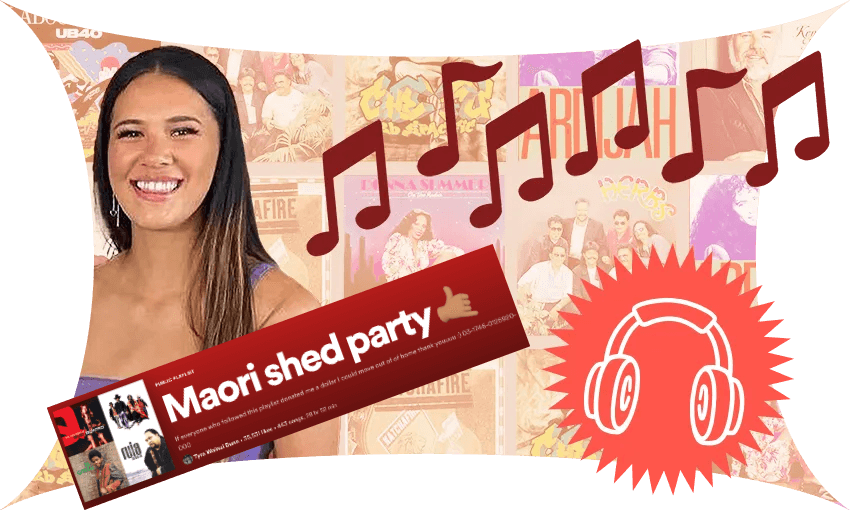 It’s 29 hours long, has over 35,000 likes and is a regular fixture at gatherings around the country. Charlotte Muru-Lanning talks to Invercargill’s Tyra Wainui-Dunn about the inspirations behind her Māori Shed Party playlist.

You’re sitting in the garage on the weekend, hours of potential stretching out ahead of you, and someone says: “Put Māori Shed Party on”. What you’re hearing is both an order and a promise of a good time. The Spotify playlist, which features an eclectic mix including Che Fu, Elvis, Kenny Rogers, UB40, Prince Tui Teka and more, has become a mainstay at whānau gatherings, drinks, reunions and 21sts around the country.

It all started with the progressive soul ballad Holding On To You by artist Sananda Maitreya, which then 16-year-old Tyra Wainui-Dunn (Ngāti Porou, Te Whanau a Apanui, Ngariki Kaiputahi, Ngāti Kahungunu ki te Wairarapa, Sāmoa) added to a new playlist on January 24, 2017.

Now 21, the Invercargill-based basketball and netball player has watched the playlist’s audience grow from her two “nans” to tens of thousands of strangers. “It took a whole year to get 1000,” she says of the playlist’s followers. At that point she posted on her Instagram saying, “I feel famous”.

Wainui-Dunn originally created the playlist so her two nans could listen to the music they loved. They didn’t know how to work their phones to put all their music together – “so I just wanted to put it all together in one place for them to listen to”.

For that reason, the music is catered first and foremost to their taste – anything and everything they wanted to hear went onto the playlist. “My nan would just say ‘get Rod Stewart’ and I’d put Rod Stewart on,” she says with a laugh. When she visits her nan’s place the radio is on constantly, tuned to stations like Magic and the Breeze. If Wainui-Dunn hears a good singalong broadcast across those frequencies, she’ll add it. She’s open to requests from her parents too. When it comes to finding inspiration, “it’s honestly just random as,” she says. “It kind of just grows by itself.”

That method of music curation has produced an ever-evolving playlist of 444 songs with widespread, intergenerational appeal – especially for Māori. Wainui-Dunn says she’s never removed a song she’s added. In some ways it’s like a sonic diary of the last five years.

When she named the playlist, there were a bunch of “New Zealand garage party” playlists, with vaguely similar assemblages of “old school music” and “New Zealand jams”. To pay homage to those playlists gone before, she put her own twist on the name – “my nan calls the garage a shed”, she explains. Now, there are heaps of playlists with the same name (and many of the same songs) on Spotify. But at least out of the existing playlists, Wainui-Dunn’s appears to be the original – and certainly the most popular.

Māori have an abundance of traditional forms of music: waiata, taonga pūoro, kāranga, mōteatea and beyond – traditions that have expansive whakapapa and history. Outside of those traditions, what makes a song a “Māori song”, I ask Wainui-Dunn. “You just know,” she answers. Rather than being defined in traditional terms, Wainui-Dunn’s playlist draws on modern popular musical influences that have been affectionately adopted by Māori musicians and listeners. Over the last two centuries there’s been a wide-ranging cultural transfer that has seen Māori adapt new sounds from overseas into our own catalogue.

Perhaps the most emblematic example in the playlist is the 1967 song Ten Guitars by British artist Engelbert Humperdinck. Despite achieving only modest success internationally, it somehow became a kind of anthem across New Zealand. But with its familiar Polynesian-esque tempo and rhythm, it’s especially beloved by Māori. So much so that the lyrics “dance to my ten guitars” are often sung instead as “hula to my ten guitars”.

“It’s all music that we’ve grown up with,” says Wainui-Dunn of the wide-ranging nature of the playlist which stretches across genres and decades. Contemporary chart-toppers from Six60, L.A.B or Sons of Zion are nestled among songs that Wainui-Dunn’s parents and grandparents grew up listening to. Accounting for Māori music means thinking about a whakapapa of sound. Just look to the prevalence of the “throwback” on Māori radio stations like Mai FM, where music has the explicit ability to act as a connector across generations. Younger listeners have an affection for the old and older listeners are open to the new. For example, favourites for Wainui-Dunn include anything from UB40 or Bob Marley, and Talk it Over by Grayson Hugh – a song released in 1988. “I can play that for hours,” she says. “Everyone loves that song.”

In August 2020, radio station Mai FM posted a meme on their Facebook page that referenced Wainui-Dunn’s playlist. It read “The perfect playlist doesn’t exi…”, followed by a screenshot of the Māori shed party playlist. Wainui-Dunn reckons the post, which had thousands of comments and likes, was a huge boost to her playlist numbers. Last year, her dad encouraged her to come up with a way to monetise the playlist. So, in August she updated the description on the playlist to include her bank account number and a note saying, “If everyone who followed this playlist donated me a dollar I could move out of home”.

Wainui-Dunn is still living at home. She’s grateful for the donations so far, but they’ve been slow to roll in – to date she’s received a total of $124, or $0.003 per like. She says she has a separate savings account called “Moving out” which houses every donation. “I’m actually saving all of it.”

This highlights a conundrum for playlist creators like Wainui-Dunn – one shared by many of the artists themselves: there’s little opportunity to transform successful playlists into tangible benefits through Spotify, despite the company profiting from their creation. “I can’t really do anything with it,” she says. “When it was growing, it was cool, but now what?”

Musicians have sent Wainui-Dunn messages asking her to consider adding their songs to her playlist. It’s a reflection of the influence of Māori Shed Party, and also a potential way to monetise the playlist – but she’s staunch about maintaining the creative integrity of her playlist and refuses to even engage. “I don’t want to ruin the vibe,” she says.

Another proposition is that people can sell their playlists. “If someone wanted to buy my playlists, I don’t know if I could sell it…” Wainui-Dunn says. “They’d be controlling the whole thing. And then that would just kind of ruin it because it wouldn’t be personal anymore.” On the other hand, “if they offered me heaps of money for it, it’s like, hmm…”