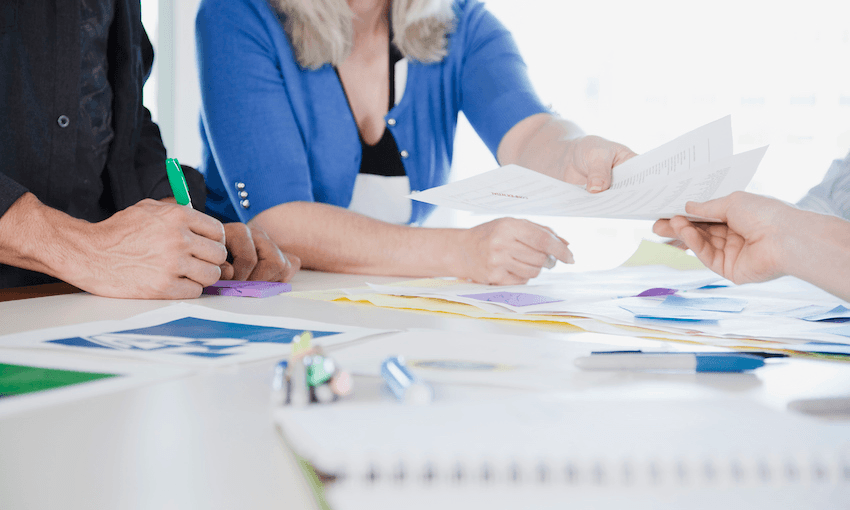 The public sector is white to its core. Here’s why that’s a problem

In government departments, Pākehā are the norm and Māori are optional extras. Fixing that requires fundamental change.

In not so shocking news, some government departments are devoid of Māori staff. Or close to it, anyway.

The State Services Commission has a bunch of roles including supporting government agencies with workforce and talent management. In December last year it published workforce statistics for 32 public service departments covering very close to 50,000 employees. In among the diversity statistics is a table showing that even in this day and age in Aotearoa New Zealand, it is possible for government agencies to have no Māori – like the Pike River Recovery Agency and the Social Investment Agency.

These two agencies between them had around 30 staff, but bigger agencies too show they achieve the almost as startling feat of having next to no Māori staff. The State Services Commission itself must have about 10 Māori staff based on its reporting, and the Ministry for Primary Industries, although a large organisation employing over 2500 people, is predominantly Pākehā, with Māori making up only 5.4% of its workforce. I guess that is because Māori don’t have an interest in primary industry… oh wait.

I am shocked that the NZ government's Social Investment Agency employs only pakeha staff, and that the Ministry of Culture and Heritage is one of the most Pakeha organisations we have (only beaten by SIA and DPMC). pic.twitter.com/DwobjE50T9

(Update: The SIA have responded to the table above; see below)

You might rightly ask whether the Māori that are employed by these government agencies are employed in decision-making roles. I’d like to know too. The State Services Commission can tell me about management roles by gender, and I can infer this information for people aged over 55, but I can’t figure anything like this out by ethnicity.

If you equate influence to pay, you get a fairly harrowing picture, especially when you look at the intersection of ethnicity and gender. The average salary for Pākehā men is $88,600, but for Māori women the average salary is $68,900 and for Pacific women it is $60,800 per year. I would like also to be able to tell you about what is happening for Māori with lived experience of disability in these public service agencies, but the State Services Commission is still working out how to gather data on disability (even though it is the year 2019).

Focusing on diversity of the workforce is problematic. To borrow heavily from Dr Ruth De Souza, diversity maintains whiteness at its core. The rest of us are the optional extra, but Pākehā remain the norm, and the institution and its way of working isn’t challenged. If it gets its diversity factor just right, it might even get a literal award.

The solution to this is changing the status quo. And to me this has to mean full expression of te Tiriti o Waitangi. This means a true partnership between Māori and the Crown, including respect for mana motuhake, and that means the way these government agencies run has to fundamentally change.

But in the meantime, government agencies still need to do better. The Crown has identified participation of Māori as a principle of its Treaty obligations, which should be reason enough, but it also should aspire to having its workforce reflect the makeup of Aotearoa New Zealand, and it also owes a duty of care to the people it employs to make their workplace not racist. This requires a more ‘diverse’, Māori, workforce.

The part of the public service I know best is health, so I’m going to use it as a case study. The Ministry of Health has among the lowest proportion of Māori staff (at just over 8%), and at the same time, its most stubborn challenge remains improving Māori health and ensuring health equity. Although they aren’t included in these figures, health sector agencies like the Health Quality and Safety Commission, Health Promotion Agency, Pharmac and the Health Research Council all report their workforce makeup in annual reports and as at June 2018, only one of them had as high a proportion of Māori as the Ministry of Health (7% is as good as it gets).

In understanding the Ministry of Health data, it is important to know that it has had a series of restructures over the past four or so years that have first disestablished then re-established a Māori health unit. The disestablishment of Te Kete Hauora (the Māori health directorate) has been discussed elsewhere, including in the Waitangi Tribunal’s kaupapa inquiry into health services and outcomes, where the disestablishment of the Māori health team is cited as an example of bad faith on the part of the Crown. The re-establishment of a new unit is a positive step generally speaking, and it had only just happened when the workforce statistics were published, so any change in workforce numbers won’t yet be reported. But it is unlikely to increase the number of Māori staff at the Ministry of Health substantially, mostly because the unit itself isn’t very big.

History also tells us that just having a unit isn’t enough to attract Māori staff. In the late 80s and early 1990s, the Ministry of Health had two attempts (of a sort) at establishing a Māori health team. In both instances all the staff resigned. After the second set of resignations, Hekia Parata and Mason Durie were brought in to advise on what to do. In this advice they say:

“While there was no single reason for the resignations, they cannot be seen as entirely coincidental. A confidential report to the Department in June 1992 had warned that the Maori unit was under-resourced and not universally accepted within the Department, nor always well regarded. It lacked a high profile and was consulted by colleagues on an ad hoc basis”.

So the existence of a Māori team is one thing, but it needs to be appropriately resourced, supported by the department and have strategic influence. Otherwise why would highly skilled and sought-after Māori staff stay put?

Māori staff aren’t only employed in Māori teams, of course. We are in roles throughout organisations. And my experience is that this is exhausting. Whether it’s reminding colleagues not to sit on tables or being told you’re ‘brave’ for providing evidence-based advice (not to mention being called ‘passionate’), the experience of not being the norm makes working in the state service unappealing and untenable for many of us even in senior roles. And there is a tragedy in this, because it means the workplaces aren’t supporting Māori staff appropriately, and that Māori are missing out on the training and development opportunities offered by the state sector. It also means Māori miss out on influencing policy development and even system change.

In looking to the future, I’d be hoping the government gets the whole Crown/Māori relationship thing right, and that it is open to fundamental change – not merely an inquiry into what could change – because these are what is required for good governance and stewardship. But it can’t lose focus either on ensuring that Māori are able to participate in the public service, and that the public service should be a great place to work for everyone – not just Pākehā.

A Social Investment Agency spokesperson writes: The suggestion that the organisation was 100% Pākehā when this snapshot was taken is not correct. This data was captured during the establishment of SIA and reflects the proportion of our permanent and fixed-term workforce at the time. As some commenters who are past employees have noted, our total workforce at that time included a diverse range of people, including Māori employees and others of Pacific and Asian ethnicities.

We agree with the author that government agencies should be representative of Aotearoa, that agencies need to do better and that Māori employees, teams and leaders are a crucial aspect of achieving this. As of April 2019, our total workforce is 89.3% European, 10.7% Māori, 3.6% Asian and 3.6% Pacific – this information is self-reported and an employee can choose more than one ethnicity. We recognise that an ethnically diverse workforce is one aspect of practicing diversity, which means we also work across the social sector to evolve our kaupapa in partnership with organisations and agencies like Iwi, NGOs and community representatives.