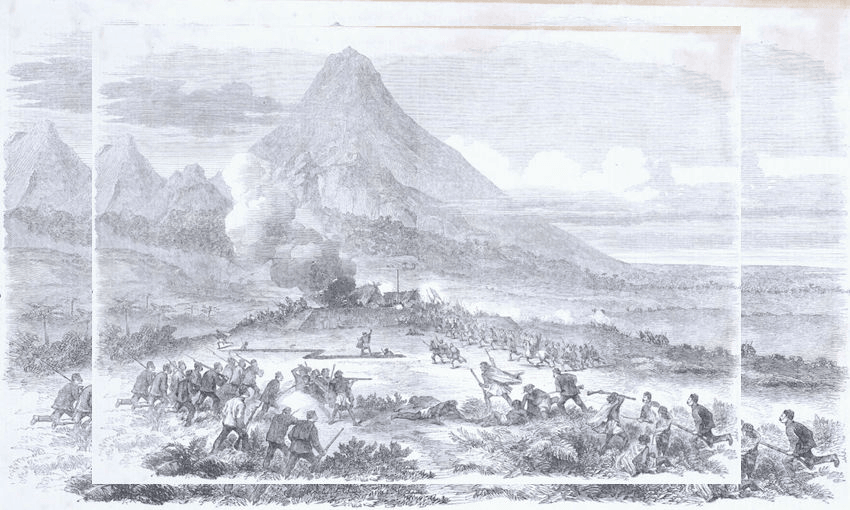 The Battle of Katikara, British soldiers of the 57th Regiment storming a Māori fortified position on the Katikara River in June 1863, one of many conflicts during the Taranaki Wars. Image: engraving – Te Papa

The Battle of Katikara, British soldiers of the 57th Regiment storming a Māori fortified position on the Katikara River in June 1863, one of many conflicts during the Taranaki Wars. Image: engraving – Te Papa

Later this month, the national commemoration of the New Zealand Wars, known as Te Pūtake o Te Riri, is to be held in Taranaki. Local community activist Vivian Hutchinson looks at how a history of conflict has shaped our sense of citizenship and describes how some people in Taranaki are now turning up to a different conversation.

For those of us who are inheritors and beneficiaries of communities based on the violence of colonial settlement, our sense of citizenship is inevitably linked to the troubles of this history. And it hasn’t been a pretty story.

It takes a much more mature nation to talk about this. It takes even more for us to collectively step up and act on the issues of justice and redress that are still causing trauma in our communities – so many years after the damage has been done.

And it takes another whole level of maturity for us as citizens to grow fair and connected communities that do not avoid the shared histories that we are still trying to reconcile.

This month will see the commemoration of Te Pūtake o Te Riri, a national time to remember the New Zealand wars and conflicts that stretched over a period from 1843 to 1916. The first official observance of these conflicts was held over three days in March 2018 in the Bay of Islands, Northland. This year on the 28-30 October, the commemorations and conversations will move to Taranaki.

These commemorations are an attempt to address the widespread amnesia in our majority culture about the wars and conflicts that came with the founding of our nation. The term Te Pūtake o Te Riri can be interpreted as “the cause or origin of the anger”, and during these commemorations, many New Zealanders will be hearing a very different origin story – one that may have been missing from their schooling.

The national organisers say that Te Pūtake o Te Riri is a messenger whose task is “to awaken the memory and conscience of a sleeping nation”. This is an awakening that will also transform our collective identity – our fundamental sense of citizenship – as we start to come to terms with who we think we are, and who we want to be.

There are many groups, institutions and individuals working to fundamentally change the national conversation taking place between Māori and Pākehā New Zealanders, and to keep addressing the unresolved questions of justice and reconciliation that are still on our national agenda.

We now have over 20 years of experience with formal apologies for breaches of the Treaty of Waitangi, establishing co-governance arrangements, the return of some assets, and financial settlements to various iwi and tribal authorities. And our political leaders from all parties may be finally starting to get beyond their lip service to the Treaty, regarding it more as a living document and an aspirational statement of what collaboration between peoples can achieve.

These are still very much early days and just the initial signs of a shift that we might hope is genuinely taking place in our national conversation. But they are also signs that run the risk of becoming just hot air — unless they are met and matched by a change in the conversations taking place at every other level of our communities.

Our challenge is not just to face the facts and consequences of a difficult history. At the same time, we need to find the courage to actively shape the communities we want to live in together. This collaboration requires a different set of skills and attitudes than the ones that have been required of us while trying to address historical grievances and negotiating levels of settlement.

In Taranaki, almost all iwi have now seen the apologies of the Crown entered into legislation, and have taken whatever compensation they have been able to negotiate in order to repair and rebuild the foundations required for a different future.

On a national stage, the controversial Ihumātao dispute is not yet settled, but it is clearly showing us the sort of frustrations and complications that leave too many people behind. Beyond the wishful thinking of “full and final” settlements, the reality is that there are far too many New Zealanders who have gone through this process and have been left without peace in their hearts or reconciliation in their minds.

This is because peace and reconciliation cannot be the business-as-usual work of politicians, government contractors and tribal deal-makers. It is the work of healers. And it is the work that we, as citizens, still need to find a way of doing together.

If we really want our country to heal from the conflicts of the past, then everyday people need to make their own sense of what is happening in the present.  The citizens, family members, neighbours and friends of all our communities need to engage and begin inhabiting the different stories of what we might look like tomorrow.

Over the past decade, there have been many initiatives in Taranaki which have explored how to change the nature of our communities by changing the nature of the conversations we are having with one another. Some of these activities have been led or supported by a network of active citizens called Community Taranaki.

This has been an informal and creative network of people who have been contributing in various ways to the social, economic, environmental and cultural well-being of our province. There is a general consensus that our community and citizenship-building activities need to acknowledge and address the inter-generational trauma that is still the legacy of the Taranaki wars and the legislative theft of lands.

Community Taranaki initiatives have included the hosting of community conversations during a three-day Peace Walk to Parihaka, supporting the Peace for Pekapeka activities surrounding the controversial Waitara Lands Bill, organising regular community circles of active citizens in the Council Chambers of the New Plymouth District Council, and convening a series of Masterclasses on active citizenship known as How Communities Awaken – Tū Tangata Whenua.

The Taranaki Masterclass was first established in 2011 and is run as a collaboration between the Community Taranaki Trust and Tū Tama Wahine o Taranaki, a tangata whenua development and liberation service.  The four-month learning journey brings together a diverse group of local people to awaken their involvement in civic life, or in hapū and iwi affairs, and to strengthen their skills and abilities to make things better in our communities.

Several hundred people have been participants so far, coming from church committees, marae committees, sports clubs, service clubs, kaumātua groups, local authorities and social service and economic development agencies. They have been encouraged to turn up not as representatives of these organisations, but as citizens, friends, neighbours and family members.

For many people, just turning up for a conversation with people who see and think about the world differently can be an uncomfortable and challenging experience. Reaching out to strangers isn’t easy. And what may be less easy is paying attention and giving respect to what might seem to be a strange way of thinking.

But the possibilities that flow from a new conversation really do start with getting over ourselves. When we follow the questions and have the empathy to appreciate a different world-view, then we might also get to taste one of the “growing-up” moments of our collective character.

Over the last eight years, the Taranaki Masterclass has emerged as a social innovation that is having an impact on civic engagement, on race relations, and on adult education for the common good. This impact might be local and modest, yet it also seeks to play its part in informing and transforming the active sense of citizenship we need to reconcile our history and more deeply address the challenges of our time.