Ngāti Porou and Te Whānau-a-Apanui led the way at the beginning of the pandemic by drawing the line at their borders to protect the people within. They weren’t just fighting to keep Covid out – they were battling bureaucracy, racism and hunger too.

Click here to read this story in te reo Māori.

The Ngāti Porou communities of the northern East Cape are some of the most isolated in Aotearoa. More than 180km from Gisbourne, the closest urban hub, Ngāti Porou are connected to the country at large by State Highway 35, a precarious and winding route that’s often blocked entirely by single-vehicle crashes or weather events. There is no permanent GP in the area, only a range of locums and the under-resourced Ngāti Porou Hauora at Te Puia Springs.

“Our communities are predominantly Māori, with very few whānau who are not affected by respiratory ailments, heart disease and diabetes, making our communities highly vulnerable and at major risk to Covid-19.”

The people of this area are no strangers to relying on themselves. Nor are they unfamiliar with pandemics, suffering immensely in the years following World War I, when influenza swept the western world. During the Spanish flu pandemic, Māori died at a rate up to eight times greater than non-Māori – a particularly devastating figure for Ngāti Porou, who had already suffered huge losses as their men were shipped to Europe to die in the defence of a foreign king and his country.

And so when Covid-19 first appeared last year, community leaders recognised immediately the critical need to keep the virus out of their rohe. 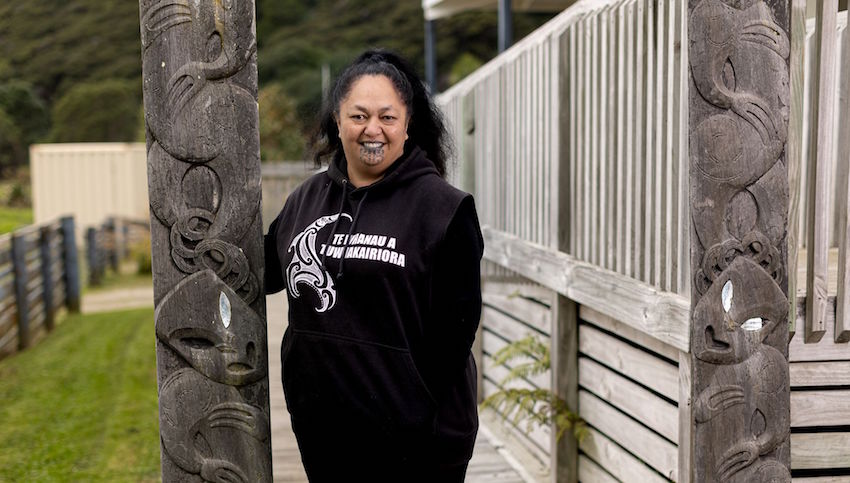 The defence against Covid-19 took place on both a macro and micro level. When sanitiser and PPE ran out, Ngāti Porou made their own, drawing on rongoā Māori and combining ingredients like mānuka and mamaku in workshops held at Wharekahika at Te Puna Manaaki a Ruataupare to shore up their supplies.

More controversially, however, the community at Wharekahika also instituted checkpoints to reduce the number of foreign vehicles entering the area.

The checkpoints, inspired by similar action taken by Te Whānau-a-Apanui, sought to turn away tourist vehicles, which continued to roam across the rohe in the first weeks of the pandemic, as well as to educate whānau about best practices for preventing the virus from entering the community.

The almost 100 staff across the checkpoints worked in shifts, enduring the cold and wet winter nights with army surplus gear and equipment lent by the Māori wardens and several contracting firms. The Motorhome Association was convinced to send word to its 90,000 members that the region was shut, and tourist attractions like the East Cape Lighthouse closed their doors.

While the hapū communicated with police daily, the checkpoints remained outside of the law. Ahead of the implementation of the checkpoints, Tairawhiti area commander inspector Sam Aberahama urged the locals to rethink the move, asking for communities to work together in an unprecedented time. “We know the community is very concerned about Covid-19, but this is illegal,” he said.

Media reaction was mixed, too, with some commentators decrying the illegality of communities shutting down the roads. Strong elements of racism were evident in reactions from think tanks like the New Zealand Centre for Political Research, which called the checkpoints “trojan horses for Māori racial supremacists”.

But elsewhere, many pointed to the efforts as a living example of mana motuhake – Ngāti Porou taking rangatiratanga at a time of crisis, when an invisible enemy once again threatened the iwi. Rawiri Waititi, who would go on to win entry to parliament as co-leader of the Māori Party, said the large number of elderly in the community in particular justified the actions.

“To lose that generation would be catastrophic for Te-Whānau-a-Apanui. That’s happened in the past here in 1918 when the Spanish flu hit,” he said. “We’ve got tombs here that remind us about that.” 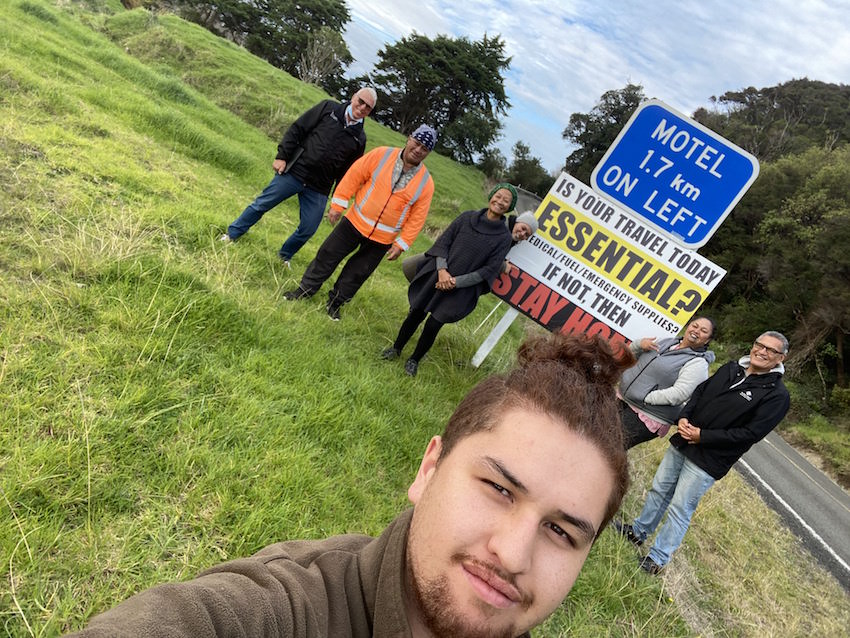 Ngāti Porou were quick to act to protect their rohe agains the threat of Covid-19 (Photo: Supplied)

Peeni Henare, Labour MP for Tāmaki Makaurau, also backed the decision, quoting the region’s life expectancy rate of just 69, compared to 81 for the general population, and the 50% Maori demographic.

Pahuru-Huriwai agrees, pointing to the efficacy of the checkpoints, and the manaaki at their heart.

“When news of the virus spread, as we watched major cities of the world come to a complete standstill and saw fatality statistics rising each day, the anxiety for our communities heightened as the prospect of Covid-19 coming into our piece of paradise became a reality. As kaitiaki of our place and space, we had no choice but to defend – by whatever means possible.”

“Our kaimahi gave selflessly to be soldiers on the frontline – away from their own families, putting themselves at risk every day. Because of their dedication, commitment and love for their whānau, hapū and communities, we kept the virus out of our paradise.”

The checkpoints also served as inspiration for iwi and hapū across Aotearoa. From Te Waipounamu to the Bay of Plenty, from Ihumātao to the Far North, communities rallied to protect their most vulnerable. And, of the many thousands of cars stopped across the many weeks of lockdown, few issues were reported and even less substantiated.

While the checkpoints kept the virus outside, life continued inside the perimeter, and lockdown brought challenges of its own. The port at Gisborne closed with the rest of the country, and whānau reliant on forestry faced unemployment. A massive undertaking to feed the hapū began: “Nā tāu rourou, me taku rourou, ka ora ai tātau” – with your food basket and my food basket we will all thrive. 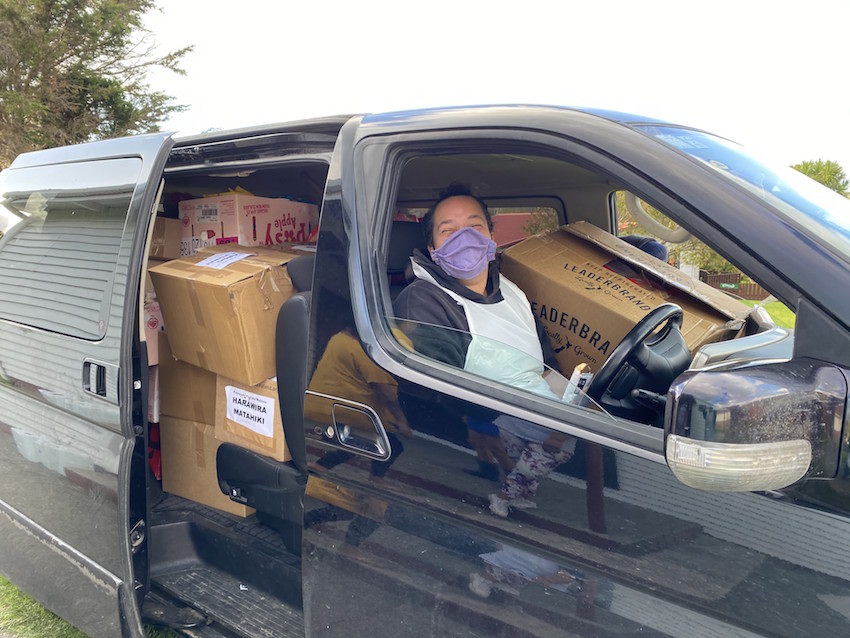 Another happy delivery on its way to whānau (Photo: Ani Pahuru-Huriwai)

Alongside donations from supermarkets, meatworks and orchards, the hapū’s own hunters and gatherers went to work, pulling kūmara and kamokamo from their maara. By the third week of the operation, more than 200 homes were being supplied with kai packages across the region. Hoia Forest was also opened by Te Runanganui o Ngāti Porou and Ngāti Porou Whānui Forests to provide firewood to those in need.

But despite the herculean effort, the hapū battled against bureaucracy and faced what they found to be unacceptable delays in serving their whānau. Taking the view that this is not the last we have seen of Covid, or pandemics more broadly, the hapū exited lockdown with a strategy and mandate to shore up their responses – Te Whatakai a Hinemaurea. The plan, says Pahuru-Huriwai, combines “law with lore”, working towards food sovereignty with the end goal of exporting the bounty beyond their borders.

“Te Whatakai a Hinemaurea will only be successful if it is built from the grassroots up, at hapū level, engaging all of our Wharekahika whānau,” she says. “Building the capacity and capability of the ahi kā to govern, manage and operate all parts of the Whatakai is critical to long term success.”

In Māori and Pākehā communities alike, Covid has had the effect of bringing people together, of slowing the pace of daily life and a return to the immediacy of the whānau around us. The challenges it posed were severe – there has been an atmosphere of fear and uncertainty.

But so too has there been a reinvigoration of manaakitanga, an increased attention on whānau and the interconnectedness of us all. For the pakeke of Wharekahika, there was, amid the unease, an underlying spark of joy, and a sentiment the hapū are determined to embody going forward into the unknown: “Why can’t we stay in lockdown forever? We have never been so well looked after.”