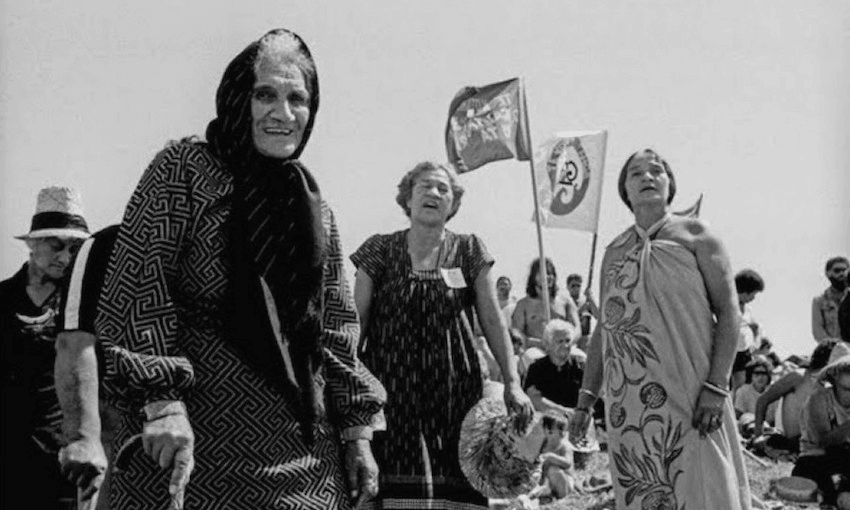 To mark the anniversary of women’s suffrage, we republish this essay from International Women’s Day 2018 by Ātea editor Leonie Hayden – how Māori women can find their way back to equity through the stories of the past.

1893 was the first time New Zealand women were given access to the Westminster vote, but traditionally Māori women and children already had a say on important issues in their own communities. As that right was slowly eroded by encroaching colonisation, Māori women joined the fight for suffrage.

They gave up a lot in the fight for women’s suffrage. In order to be included in the campaign, Ngā Komiti Wāhine made an alliance with the Women’s Christian Temperance Union and so were required to subscribe to the rules and regulations of the Union in return for their support. They had to adopt practises that went against Māori beliefs about womanhood and family, but the greatest sacrifice was having to revoke the tradition of tā moko. In her essay ‘The negation of powerlessness’, activist Ripeka Evans writes: “I can think of no more firing manner in which to celebrate suffrage than to begin again the tradition of ta moko.”

In 1993 a group of Māori women filed a claim to the Waitangi Tribunal, now known as the Mana Wahine Claim. The claimants included a list of my dream dinner party guests – all of the Māori Women’s Welfare League, Lady Rose Henare, Mabel Waititi, Dame Whina Cooper, Dame Mira Szászy, Ripeka Evans, Donna Awatere and Paparangi Reid. A group of women with enough mana to sink a fleet.

They alleged that the Crown’s actions and policies since 1840 had systematically discriminated against Māori women and deprived us of our spiritual, cultural, social and economic well-being, which is protected by the Treaty of Waitangi.

The main motivation for the claim was the removal of a respected kuia from the shortlist of appointees to the Treaty of Waitangi Fisheries Commission. The fisheries settlement process ended up being overseen almost exclusively by the Crown and Māori men.

The Minister of Māori Affairs at the time, Doug Kidd, responded that the lack of status accorded to Māori women was the fault of Māori men — not the Crown.

There’s no doubt in my mind that entrenched institutional misogyny was gifted to us by colonisation. You can’t pass a disease onto someone, and when they pass it onto someone else claim it had nothing to do with you.

However, none of us is entirely blameless.

As Māori, we have all internalised and perpetuated the misogyny of the Western world. Māori women all know a generation or more of Māori men that love the sound of their own voices and don’t much care to be contradicted or told what to do by women. To think we might be exempt or somehow above the sexism that permeates the world around us is unrealistic.

But there are lessons in our history and our language that tell us it hasn’t always been this way. Pakiwaitara and historical accounts of brave women and atua wahine, as well accounts of daily life and social structures in different hapū, suggest we know how to live without trampling on the mana of women.

I’ve been told our ancestors recognised more than two genders, and been given the excellent advice “…any opportunity we have to carefully think about heteronormative gendernorms being perpetuated through publication – either through atua narratives or tipuna narratives – we should be taking it.”

And I’ve heard theories that stories of women ancestors have been lost or attributed to men by European ethnologists because our personal pronouns (ia/tana) are genderless.

I don’t claim to be a history or tikanga expert, but I believe based on what I’ve learned that we once truly believed in equity among genders, while acknowledging differences and strengths on all sides. We can find a way back to respecting and elevating mana wahine by listening to the past, and to the amazing Māori women that have spent the last 150 or so years fighting to be heard. Me āta whakarongo ki ngā tūpuna.

The Mana Wahine claim will finally be heard by the Waitangi Tribunal as part of the Kaupapa Inquiry this year, some 24 years after it was filed and 125 years after women were given the vote in New Zealand. Some of those fighting mareikura have now passed on but they look to us to carry the torch and continue to hold our leaders to account. We’re more emboldened than ever to make those claims as Māori women, wearing tā moko if we choose, and with all of the experience, strength and perspective that entails, rather than taking the scraps given to us by Pākehā and Māori men.

In talks about decolonising media practise, I always tell people to follow the power. Look at who has power and who has none. Listen to those with less power and ask why. This still holds within feminist discourse. Māori and Pasifika voices need to be elevated for us to find our way back, to go forward.

Ask your mums and nannies to tell you their stories. Hold those stories tight.

* There are hapū that traditionally give women speaking rights on the paepae. This kōrero was to meant to illustrate what the men-to-the-front, women-to-the-back dynamic means. Tikanga evolves and many hapū and marae are having conversations about the future of speaking rights. This autonomy and respect for the mana of both men and women is an important part of tino rangatiratanga.

Made with the help of NZ On Air

Watch more episodes of Kaupapa On The Couch

Ripeka Evans The negation of powerlessness

Annie Mikaere Māori women: caught in the contradictions of a colonised reality