Actor, protestor and overall blimmin’ legend, Rawiri Paratene is about to retire from the stage. Sam Brooks spoke to him as he prepares to say goodbye.


Before our interview, Rawiri Paratene ONZM (Ngā Puhi, Te Rarawa) said, through a publicist, that he would be a better interviewee if I brought some kai. Pie or slices are his favourites. He didn’t end up eating any of it. It wasn’t for him, it was for the others working at Henderson’s Te Pou Theatre, scurrying from meeting to meeting to get the venue ready for his final show.

Paratene is one of Aotearoa’s most accomplished performers. Whale Rider’s Koro is the role that brought him international recognition, but he’s also starred in Footrot Flats, Shortland Street and countless theatre productions. He’s performed in a Globe Theatre production of Hamlet in 197 countries across the world. He’s won multiple awards for his writing and directing, on top of his acting. He’s even run as an MP for the Green Party. His current storytelling show, Peter Paka Paratene, is a victory lap on a 50 year career in the performing arts. “That’s all I’ve done, being in the arts,” he says, with a cheeky chuckle. “It’s all I can do.”

We are sitting on an old leather couch on a makeshift stage before the open dress rehearsal of Peter Paka Paratene. The show, which premiered in 2017, was meant to have a return season last year. It was disrupted, as many theatre shows were, by Covid-19. It was also disrupted by Paratene having multiple strokes, which left him with aphasia, a speech impairment that leaves the subject looking for language and words.

Paratene apologises for that search for words early on in our interview. I remind him that I have a stutter; he needn’t bother with the apology. He laughs, and reaches out across the couch and knocks me on the shoulder. “At least we’ve got the two of us!” (We worked together, briefly, on a workshop eight years ago. He is now as he was then – genial, jovial, very keen to get on with it.) Paratene might be proud, but he reserves very little of that pride for himself. He’s proud of the Māori and Pasifika arts community, saying in both our interview and his show that they are “the best in the world”. He’s proud of the mononymous Taika (“Where did that come from?”), of his daughter, Greens co-leader Marama Davidson, of Hone Harawira (“He became an MP! Who would have thought?”) and his late mate, the legendary Nancy Brunning (“I think she’ll be here to see the show”).

Naturally, I have to press him on what piece of his own work he’s the most proud of. He gives the obligatory nod to Whale Rider, but, after some contemplation, he settles on Play School, the nation’s de facto babysitter from the early 70s into the 80s. Paratene was a presenter on the show, and while he wasn’t the first person to say “kia ora” onscreen (then groundbreaking), he wove it regularly into the show.

The country’s growing comfort with te reo seems to genuinely move him. During the open dress rehearsal – with invited guests from both acting classes and students studying the language – he is stoked whenever somebody asks a question in te reo. Paratene recounts a recent walk in his home suburb of St Heliers, where a local Pākehā man (not an unusual sight, he notes) greeted him with ‘Ata mārie!’. “Back then, you couldn’t even begin to think that would happen. Now they’re saying things like that all the time!”

Those morning walks have become a huge part of his life since his strokes. Last year, Paratene had surgery to prevent him from having any more strokes, and a huge part of his recovery since then has been taking walks, naming things out loud as he sees them. “I’ll say whatever I can see! ‘Screen, people, blah blah, blah!’ At first, I couldn’t blimmin’ say heaps of words.”

He corrects himself, “I couldn’t say many words.” 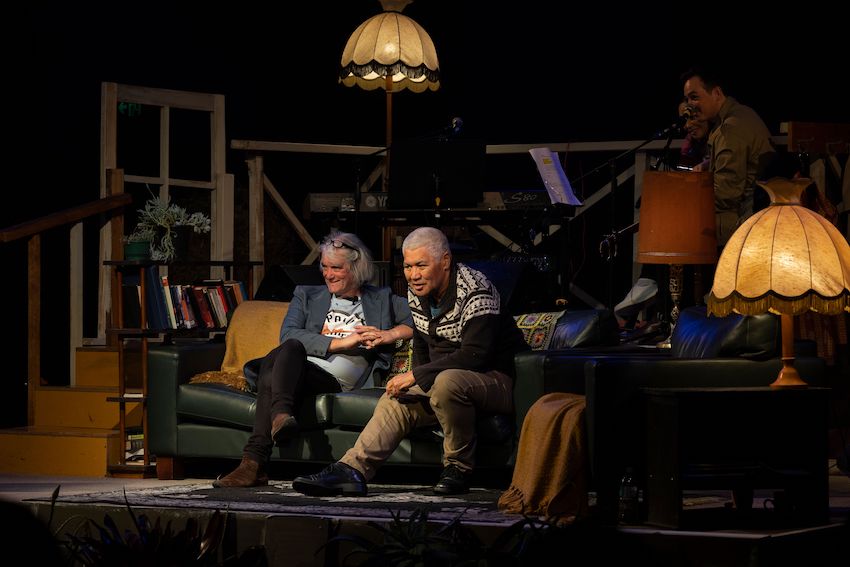 In short: His words have become his work. During the show, he reads part of the script off a TV screen, and is gently prompted by his old friend John Gibson, the leader of the onstage band, with topics of conversation that form a vague script. The show is in three loose, but distinct, parts. There’s Peter (David Broughton), his birth name, and as he reminds us, the name he got married under. Then there’s Paka (“bugger” in te reo), his years when he became established and when he leaned into politics more overtly.

Finally, there’s Paratene, the name he took on for one production of “a terrible play”. After he got good reviews in a Mercury Theatre production of Annie Get Your Gun, colleague and contemporary George Henare recommended that he keep it because he was getting good reviews under the name. It stuck, and so did the good reviews.

Shows like Peter Paka Paratene can turn into epilogues, or even worse, eulogies. ‘A night with [insert name actor here]’ where a luminary dispenses with any sort of rehearsal, script or semblance of performance. These shows are often little more than a chance to be in the same room with a legend, to breathe the same air. Nothing about Peter Paka Paratene feels like that.

Paratene is lively and engaged for the show’s duration, and when he speaks off the cuff, there’s nothing more magnetic; he seems as delighted to have us there as we are to be in his presence. The show leaves room for the audience to ask questions in between each segment, and at one point a younger relative, who he hasn’t seen in a long time, asks him a question. He immediately brings her up onstage and starts up a conversation with her, asking after other relatives, beaming throughout. Julie Andrews isn’t gonna do that. 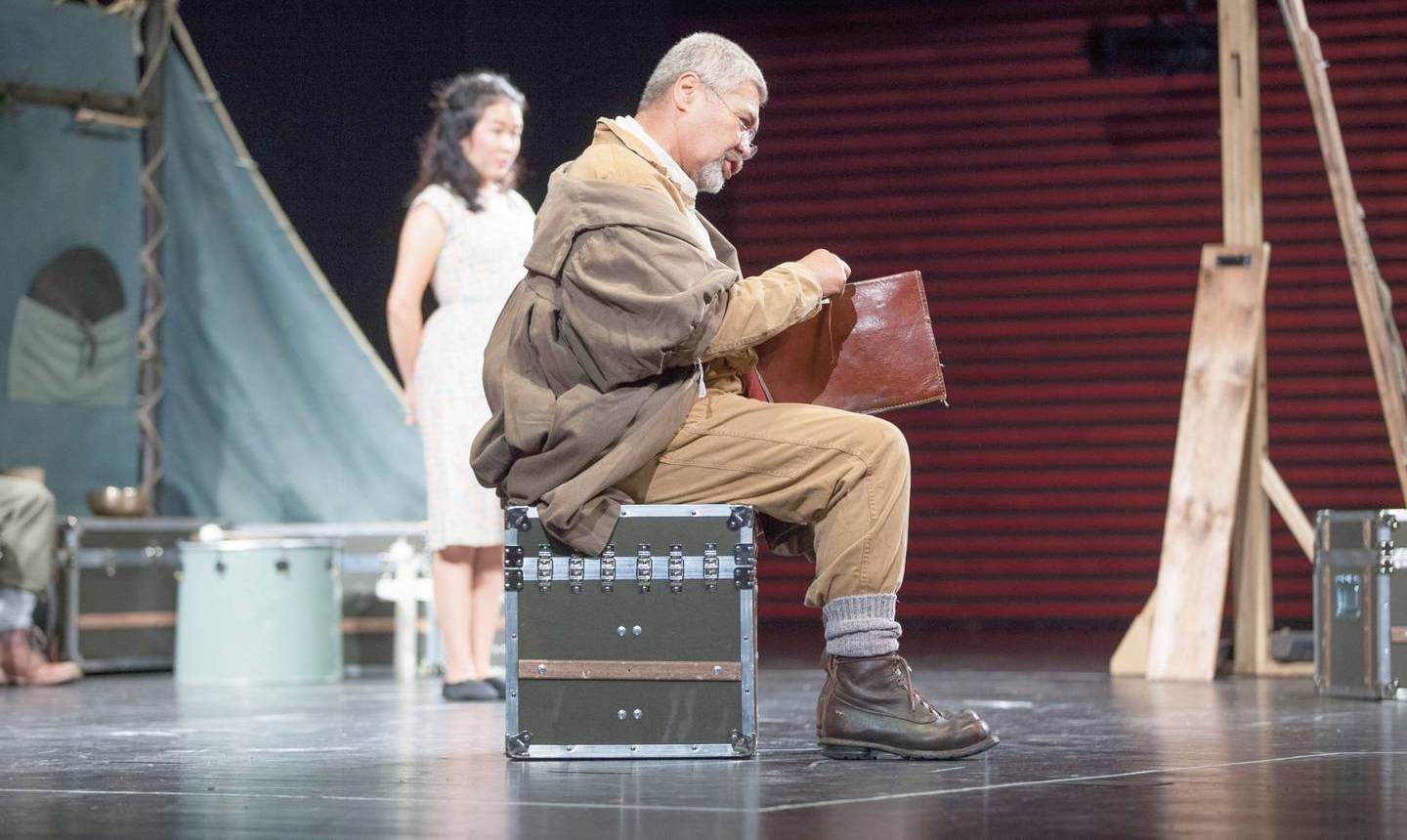 Rawiri Paratene in the Globe to Globe production of Hamlet in 2014. (Photo: Supplied)

There are multiple songs peppered through the show, and the best of these are when Paratene takes to the mic himself. He and Gibson, a force of nature in his own right, do a duet they wrote together in a bar in Dunedin based on an Aesop fable. Gibson plays an ant, Paratene plays a grasshopper, complete with that familiar high-pitched noise. It’s delightful.

On the gig we worked on together, a workshop for Nightsong’s show Te Pō, Paratene sang a few Prince Tui Teka songs. Even in those stripped-back workshop performances, I’ll never forget the professionalism and craft he brought to them. I’ll also never forget the glee. Many actors in their later years can get complacent – this is what they’ve always done, why should they be grateful? Paratene still looks stoked to be there, decades after he’s earned his place. “I’ve always worked hard,” he says. “I love working.”

And despite having worked in theatre for over 50 years he says he still gets stage fright, which manifests as excitement, as it often does. “You just don’t know how I’m going to do, or how we’re going to do. Maybe someone’s coming in to diss me, ‘I knew you! You were a bastard!’”. While Paratene’s last screen credit was Three’s Golden Boy – an experience he speaks of extremely fondly, asking after several mutual friends involved with it when our interview wraps – he’s embarking on another journey. At 67 years of age, he’s starting an MA at Auckland Uni. “It’ll be nice to go, because they’ll all be young. And I’ll be this old guy in the back, going ‘oh my gosh!’. I’ll have to do a thesis later. I think that I’m gonna do English, I might do lit, and I might do art history. I’ve always loved art.”

He also doesn’t think the work is done for New Zealand yet, either. Paratene is passionate about many things beyond his acting work; he’s been a very vocal protester since the 70s, where he was a part of activist group Ngā Tamatoa. He’s deeply passionate about the environment. “We have to look after our planet. Ever since I’ve had a vote, my first vote was for the Values Party. Every election, I think about who I will vote for, and it’s always about our environment. It’s all we’ve got.”

This week, we’ve got Peter Paka Paratene. Next week and beyond, we’ll have whatever name he goes by next – Peter, Paka, Rawiri, or his family’s nickname for him “pet” – embarking on the next journey.