Duncan Greive and Leonie Hayden were young hip hop heads and music journalists during the era captured in a new documentary about the rise and fall of South Auckland hip hop label Dawn Raid. Here they discuss the film and their memories (what’s left of them) of that time.

Duncan Greive: It’s great to see them get their dues as entrepreneurs here. The thing that hit me in the chest from the start is the entrepreneurship, how driven and creative they were across so many different disciplines. Those t-shirts were everywhere in South Auckland at the time, and if they’d just stayed with that they might still own the houses. But they dreamed huge and never stopped running: the retail store, the studio, the office, the barber shop. Doing all that essentially before they’d even started releasing music – it’s just incredible. You can see why they eventually fell, but the audacity is dazzling.

Up until now, I think there was some sense from NZ’s cultural elites that this was a gaudy label that had a few hits then got felled by tax trouble. That’s why it’s so great to have this thing out – I feel like director Oscar Kightley has done an extraordinary job laying out the case for Dawn Raid as a landmark achievement, not just cultural, though its impact is immense, but a business too, as a South Auckland conglomerate with limitless ambition.

Leonie Hayden: There was so much I didn’t know about them that I’m totally inspired by. I knew about the t-shirts but honestly, I thought the chronology went “selling t-shirts at Ōtara markets, Deceptikonz blowing up, Boost Mobile Tour”. I’m actually pretty humbled to learn about the empire they were building out South. They made phone cards! I forgot about those. Like you say, had they been blessed with a bit of hindsight, it could still be a humming community empire. Oscar Kightley told that story so damn well – the first line in the film that made me go, alright this is gonna be a ride, was Andy Murnane saying “Millionaire… what a wonderful word”. Such a cocky thing to say, just filled with potential for things to go wrong. Actually the first line I laughed out loud at was young Mike McRoberts doing a report on them and saying “…when these two bad boys hooked up together” like a big dork. Any stand out lines for you?

DG: Honestly, the line which really hit me came right at the start, and (I think) repeated near the end. “How can we do that?” said [Dawn Raid co-founder] Brotha D. “They shouldn’t allow us to do that, we’re from South Auckland.” It’s so poignant because, as they allude to at various points, media coverage of South Auckland has always used its name as a shorthand for poverty and crime. That they overcame such extraordinary antipathy to become the single most powerful cultural force in the country is stunning. There should be statues of them at the site of the first store. For it all to fall away for the want of some accounting discipline, during a notoriously punitive era from the IRD, breaks your heart all over again.

It’s such a big, complex story, it feels like something brewing in Oscar for a decade or more. He should be so proud. Did any scene in particular leap out for you?

LH: So many! The introduction of the Russian sound guy, Adeaze talking about when they figured out that their mum had slowly paid off all those instruments for them. Andy not knowing what a publishing company was, but copying Def Jam and printing “Dawn Raid Publishing” on all the CDs. Mareko in jandals in the snow in New York. Mareko all wide-eyed in the studio with Inspectah Deck! So many beautiful vignettes that perfectly captured where they came from. There’s a super charming naivety to those scenes that makes it all the more heartbreaking when it all comes crashing down. But then [Dawn Raid co-founder] Andy Murnane’s natural chutzpah kinds of buoys the story again. Honestly, the cajones on that guy… DG: Charming naivety is so right – what they did was incredible, and you can imagine the response of a careers counsellor in school had they floated it. And it seems ineffably sad to me that despite all the money the government poured into the likes of NZ Trade and Enterprise (because they were huge export earners) at the time that no one reached out to try and help them through a period of ferocious opportunity and growth. But the thing that stays with me, more than that, is the music and overall aesthetic. I remember so well that era, all these Black-owned labels like Cash Money and Death Row coming out of the US, and it’s so clear that the power of hip hop is that it convinced two dudes who were really on a tough path that they too could take on the world.

I also remember interviewing Savage for my first Real Groove cover story. It was in the Universal offices, and I brought in this giant tape deck I’d bought from cash converters for $20. His speaking voice was so soft and low that transcribing it took a whole day. But I remember feeling certain that the guy was going to be a star – his tone, his force, his sense of fun. What are your memories of that era?

LH: My flatmate’s girlfriend who worked at Soundz had left the Deceptikonz Elimination CD at our flat and we had it on all the time. Like, for months. It still fucking goes. I went to one of the Boost Mobile Tours but I actually couldn’t tell you which one. It’s a… hazy period, memory-wise. I do remember having that moment, when Dawn Raid and Scribe really hit in 2001/2002, where I was like, “oh shit being brown is finally cool!” Growing up on the Shore I had spent so much of my life assimilating it was like taking a breath. This innate way of dancing I had was cool all of a sudden, and after the Kate Moss heroin chic years, being a bit curvy was finally cute. I’m not claiming I was a massive b-girl or anything, but I never felt out of place at a hip hop show. And there were so many shows too. It was kind of a boom period for internationals coming through. My ultimate shame was getting up on stage at Tha Alkaholiks and getting booted off for “the real dancers”. Who do you remember seeing live in the early 2000s? DG: It was such a golden era for rap shows, particularly those St James ones – RZA, Gang Starr, Kanye doing College Dropout are three which will stay with me until I die. Between them and those early hip hop summits there were so many opportunities for Dawn Raid artists to play in front of large and receptive crowds. Deceptikonz and Aaradhna in particular really took advantage of those stages, and those songs were so hooky that they often outshone the headliners. I so take what you mean about that validation, about being brown and from NZ being cool, and not just a predictor of social statistics or a reason for suspicious looks from palagi. Dawn Raid made it cool on a national level, and very much on its own terms. It was such a blast of Pasifika culture, unmediated and with many of the usual gatekeepers routed around.

The film ultimately scans as a love letter for that period, when all this ambition, entrepreneurship, music and culture could blast from South Auckland out into the world. So cool to think of Jawsh685 doing it again, nearly two decades later. And while it might gloss some of the financial mismanagement, and the concerns of some artists, notably Adeaze, sound valid (and very similar to those levelled at Flying Nun during their peak), I think the balance between reflection, recrimination and celebration is perfectly struck. I really think it’s one of the most compelling documentaries I’ve ever seen out of this country, and expect that it will lead to a full-blown revival and embrace of Dawn Raid in Aotearoa in 2021. 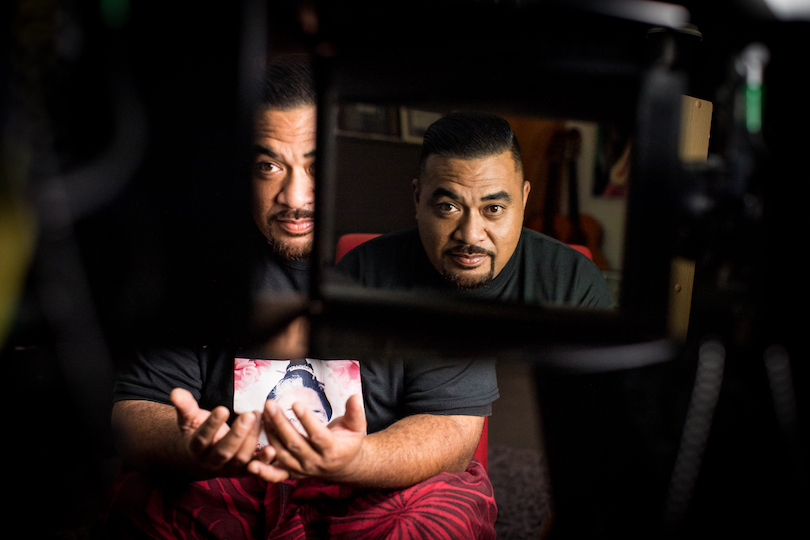 Nainz from Adeaze, who features heavily throughout the documentary, has posted a heartfelt Facebook message saying stating he’s ‘fighting a personal battle with this movie’, saying it’s not the ‘whole truth’. (Image: supplied)

LH: Oh man that 2006 Kanye show was so great, RIP. For sure there’s probably a lot this doco isn’t telling us. Adeaze have already come out about how upset they are about what got left out of the documentary, Aaradhna too, which is such a shame. They’re on the poster ffs. Also, as much as I found it liberating that hip hop was coming out of the margins, I also felt very keenly how much of a dude’s game it was. As well as there being no women rappers on Dawn Raid or Dirty Records‘ books, I remember the dancers and extras in a lot of NZ hip hop music videos back in the day were white women and that really used to get me. You could tell it was a decision made for a certain audience and it sucks feeling like even though this art form is made by people who look like you, it’s not for you! Ironically, the documentary talks about that being the reason ’Swing’ ended up being a viral hit among white college kids in the US – cos the girls in the video were light-skinned and had no ass! If they could do it again, among all the things they’d do different, would Dawn Raid try and bring more women through, I wonder?

Regardless, as a film it’s a beautiful balance of oral history, archive and storytelling. And the heart of it, that massive love for South Auckland that Brotha D and Andy poured into everything they did, doesn’t seemed dulled in any way. A detail I loved was that at the top of their game, when he finally made his millions and Andy actually got to buy the house with the pool, it was still in ‘Rewa. Respect!