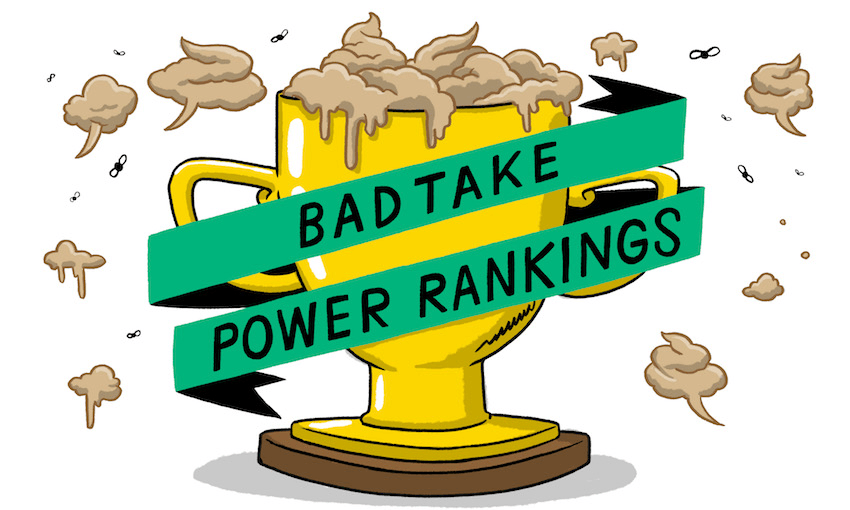 An announcement: We will no longer be responding to all the tired old opinions on Māori language and culture trotted out by people with no lived experience of being Māori in Aotearoa. Instead, we will rank them here.

You know what’s tiring? Like, so deep-in-your-bones exhausting your very marrow puts on trackpants and goes back to bed to binge-watch Outlander?

The steady tide of ignorant opinions on Māori language, history and culture by white dudes with a platform.

Inevitably I or one of my colleagues writes a response filled with despair at the breathtaking racism/sexism/willful ignorance. We hit publish, get a spike in views. We marvel at how deeply disturbing some of the comments are, and then watch as the fantastic majority of commenters destroy them. Rinse and repeat.

But it’s an emotionally draining process. I get angry. I get upset. My culture is routinely dismissed in mainstream media as “irrelevant”, and frankly, in light of Mike the Hosking’s latest terrible thoughts on te reo Māori, I cannot muster the energy to go on arguing. There are only so many ways you can tell bin people to get back in the bin. There are only so many times you can shut yourself in the bathroom, take many deep breaths and tell yourself to suck it up and try to address deeply personal attacks on your ancestors as ‘interesting media commentary that I, a professional media practitioner, will tackle with a clear-eyed impartiality’ (which I never do).

So instead I’ve decided to rank these awful takes, and as people publish more, I’ll simply slot them into an ongoing tally of the country’s shittiest opinions and you can see how they compare.

And then after a while we’ll take them and lock them in a lead-lined box and bury them in a hangi pit deep beneath a very large mountain and 500 years hence a future te reo Māori-speaking generation will dig them up and have their faces peeled off à la Raiders Of The Lost Ark by the horrible attitudes of their primitive ancestors.

Please note that I haven’t included the regular racist nonsense from the likes of Whale Oil because I only wanted to focus on people and platforms that have a large following.

We’re kicking it off old school with a vintage piece that is actually responsible for igniting my interest in indigenous issues and Māori media – Sir Paul ‘Cheeky Darkie’ Holmes’ anti-Waitangi diatribe from 2012. This was easily the most offensive thing I had read to date, in which he accused Māori of beating up their children, failing at school, stealing all the kaimoana and being the worst. Complaints made to the New Zealand Press Council about this particular column were upheld on the grounds that: ‘Holy shit dude, that’s terrible. You… you can’t say that.’

Thank you for making me the person I am today, Paul.

Written in 2017 dontcha know. To quote the greatest Pitchfork review of all time, my thoughts can be summed up thusly:

In which Michael Laws loses his dictionary and gets the definitions of ‘racism’, ‘privilege’ and ‘special’ wrong, and it gets worse from there.

Palate cleanser: Despite Laws’ hard-fought battle against it, Minister for Land Information Louise Upston decides once and for all that Whanganui city and district must be spelt with an ‘h’.

Brockie, a hedgehog specialist, offered this very well-informed opinion on nearly 1000 years of Māori matauranga and epistemologies, and declared all kaupapa Māori-based research is “religion”. I had strong opinions about that.

The trouble with Mike Hosking is a lack of relevance to me, my community and to the hundreds of children in kura kaupapa education right now, many of whom speak te reo Māori as their first language at home. I mean, FFS, imagine being a kid and hearing some guy in terrible distressed jeans talk about your life like this:

Palate cleanser: this story about Auckland tertiary institutions being unable to keep up with the demand for beginner te reo Māori classes.

Now, let’s be honest. Don Brash’s anti-Māori, anti-Treaty outbursts could occupy positions 1 – 50 and fill a particularly boring book, but who has the energy? So instead all you need to know about can be summed up in his 2004 Orewa Speech.

He’s since formed a hapū of aggrieved boomers called Hobson’s Pledge, based on a famous quote that probably never happened. Whoops.

Like poor Michael Laws, Don is a victim of the Dictionary Burglar and describes efforts to disrupt a nearly two-hundred-year-old cycle of poverty, over-incarceration and poor health and education outcomes as a result of colonisation and Treaty breaches as “special privilege”. We are indeed privileged Donald – to have this excellent montage of what people do with their faces when you’re talking.

Palate cleanser: This play-by-play of Don Brash being roasted until crispy by Kim Hill

Congratulations on your double nomination! In this Mike’s Minute, our favourite historian and political commentator calls Waitangi Day an “annual ritual of abuse, anger and ignorance” and dismisses Māori concerns about the TPPA, particularly the right of foreign investors to bring claims against the New Zealand government which could have an effect on the Crown’s willingness or ability to meet its Treaty obligations, as “attention seeking.”

The Boy Wonder questions why Māori were protesting that they hadn’t been consulted, because surely they had heard about it for months and hearing about it and being consulted are definitely the same thing.

Who else would you like to see in the hall of fame? Let us know at info@thespinoff.co.nz