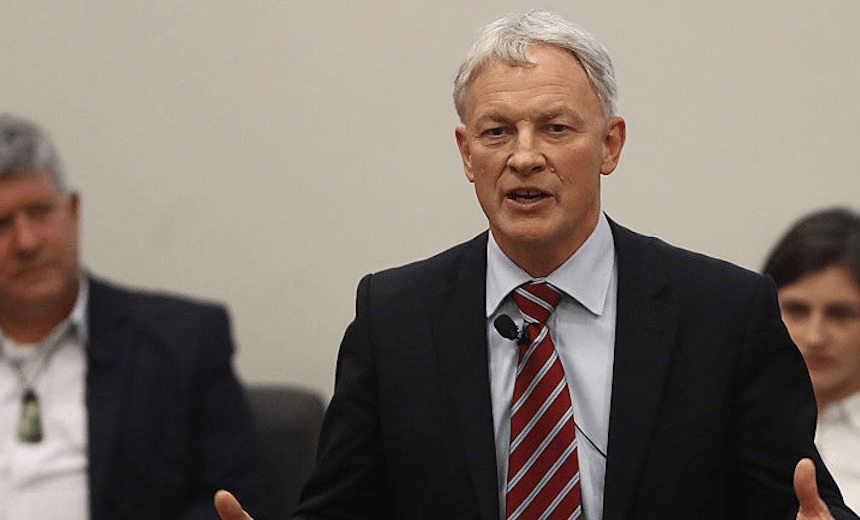 Mayor Phil Goff has announced the results of his first round of spending cuts and, as Simon Wilson explains, they’re full of surprises – not least for him.

Phil Goff is not going to slash and burn the council’s spending on promoting Auckland to the world. That’s despite a good deal of gnashing of teeth earlier this year about how council agencies, especially ATEED, were wasting money doing this.

He is going to undo and reorganise the way Watercare works. That’s despite Watercare being the flagship agency of the supercity, in the eyes of the man in charge of setting up the super-city and then running Watercare – the late Mark Ford.

Goff is going to make big cuts to the “communications and engagement” budget. But in the domestic waste management budget big savings have already been made and he is going to make only small further cuts.

All up, they’ve found $373 million to save over 10 years. Nearly all of it comes from water management. There are no proposed cuts to the money spent promoting the city and attracting investors. The recommendations go to council on Monday and they seem likely to be adopted.

Those four areas (water, waste, comms and attracting investors) were top of Goff’s list in a much bigger programme of review, designed to increase spending efficiency and make savings. They were among the areas in which he thought it might be easiest and best to make cuts.

The $0 savings target in “Investment Attraction and Global Partnerships” is the most surprising. These reviews were done with the active involvement of independent experts – in this case, Simon Murdoch, former head of both the ministry of foreign affairs and the department of prime minister and cabinet. As Goff said, at a press conference to announce the outcomes of the review, “He probably knows what he’s talking about.”

Murdoch has pronounced the council’s activities in this field to be in line with “best practice”, said Goff. ATEED (responsible for economic development as well as tourism and events) is not the only council agency that seeks to make Auckland the best place in the world for people to come and “live, work and play”, but it is the lead agency in this work. The report says they could all work more closely together, and with central government, but it is clear they are not wasting our money.

That’s a big surprise, given Goff’s opposition to ATEED’s proposed Auckland Story campaign with the slogan Tamaki Makarau: City of a Thousand Lovers. (Our earlier story on that here.) Still, he’s embraced the report now and will be promoting its recommendations.

“I’m an evidence-based politician,” he said. And the evidence, it seems, is in.

The outcome for water management is less surprising but more significant. Council will save $300 million over 10 years through a process of “further integration and joint procurement”. As Goff explained, much of the management of fresh water, stormwater and waste water is currently done separately.

Was he saying that they all buy their own pipes and software and so on? “Yes,” he said.

It seems blindingly obvious that such separation is stupid, so why has it taken so long to be addressed? Goff talked about the “silo mentality” and how, now the seven old councils have become one, this is one of the next steps in efficiency for the supercity.

But is it building on the work done to set up the supercity, or undoing part of it to start again? Goff fudged the answer to that. The reality is that when the previous government set up Auckland Council in 2010, the man in charge of doing it, as head of the transition agency, was Mark Ford. He then went on to become CEO of Watercare. Ford died in 2014 and it is his fiefdom that is now being restructured. And not before time. There are billions soon to be spent on new integrated stormwater and sewage systems in parts of Auckland and the organisation doing it needs to be highly functional.

The council also has outfit called Wai Ora-Healthy Waters, that is not a council-controlled organisation but sits within the main part of the council operations. Its functions heavily overlap those of Watercare.

Goff’s view is that regulatory oversight belongs with the main body of council but operations are the job of Watercare. The review to date doesn’t go that far, but, Goff said, to achieve that setup is “the clear objective”. He added that there are “huge benefits for Auckland and huge savings to be made”. That $300 million may be just the start.

The “communications and engagement” budget will lose $54 million over 10 years. Goff made a point of stressing that it’s not all press releases and spin, but that the engagement work covers all sorts of promotional and consultation activities. That’s true, as outlined here. Goff and finance committee deputy chair Desley Simpson, also at the briefing, wondered aloud if all the half-page ads they place in the Herald are money well spent. Digital communications are the future, “and they could be cheaper”. Well, they could be, but it’s not a given, and it would be a terrible shame if cost-cutting in community engagement simply led to less engagement with citizens.

In fact, most of the $54 million will probably come from attrition. There’s a 20% annual turnover in council comms staff, which Goff agreed was a worry in itself. “It’s an indicator of a problem,” he said. That’s also true. Also worth noting: quite a bit of the comms and engagement work is funded by non-rates income. The cuts will reduce the amount of rates allocated to comms by $7 million over the next three years.

The adviser to this section of the review was the extremely experienced Tina Symmans, one of the country’s top corporate PRs and a close ally of the National Party.

As for waste management, the knives were out before the knife fight even started. $188 million has already been sliced out of that budget, and only $18.5 million in further potential savings was identified. This is short-term, though. The council has a Zero Waste goal, and meeting it will both require expenditure and then, over time, reduce it. Much more to come on that.

Goff will take all the proposals to the council’s finance and performance committee on Monday. He expects them to be supported. It’s a warm-up, really, because later this month that same committee (which has all councillors on it) will be neck-deep in the 10-year budget. Already, says Goff, there are way more demands on spending than they can meet. Double the current budget?

He’s made it clear that’s not going to happen. This review exercise, based on in-depth analysis, is him showing us what he means when he says he means business. Some cuts, some common sense. It’s been done pretty well.