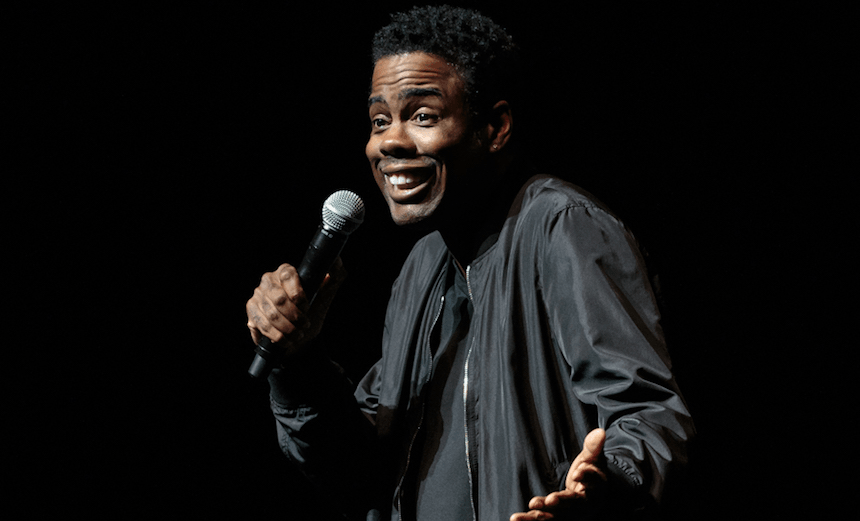 All women want from you is money: A night with Chris Rock in Auckland

Comedy megastar Chris Rock performed to a packed Spark Arena on Saturday. Like being yelled at by a rich man about controlling, manipulative, money-grabbing women? This was the show for you, writes Leonie Hayden.

It’s a strange feeling to sit among a crowd of 10,000 guffawing people and not get the joke. When you’re as attuned as I am to how unfair the world is for women and minorities, it’s weird to be reminded that actually, most people are happy to pretend the world is a purely heteronormative place peopled only by difficult wives and cuckolded men.

Ten years ago I watched a stand up bit by Chris Rock where he stated (read: yelled) that single, working mothers need to go home and look after their kids. That was the whole bit, but he wasn’t joking, it was a statement of fact from his point of view. Women that work are bad mothers. There wasn’t enough time to dwell on how they might otherwise procure money to keep their kids from shrivelling up and dying, nor whether the fathers of their children might be ever so slightly accountable. Time to move on to the next joke. YELLING MAKES IT FUNNIER.

But I also cackled with glee when he eviscerated Hollywood in his opening Oscars monologue this year, and I loved his documentary Good Hair. Prompted by a heartbreaking question from his young daughter about why she didn’t have “good hair”, it looks at the African American hair industry, and the awful questions it raises about why black girls and women are brought up to believe their hair is wrong and unnatural.

So with all that in mind I decided to go to his Auckland show at Spark Arena this past Saturday and can honestly say I was expecting an entertaining night out.

We arrived 10 minutes before the show was supposed to start to find bottlenecks of people still out in the rain waiting to get in due to security measures that included confiscating all cellphones and putting them in magnetically sealed pouches, which they would unlock after the show. Seems a risky thing to ask of people with children, or in case of any type of emergency, but he has a $40 million Netflix deal to protect so your children can go to hell.

Rock came on looking very much like a newly-divorced, middle-aged celebrity – tight black jeans, black kicks and black jacket. He had plenty to get stuck into and didn’t waste any time: Trump, police shootings. He took a wicked pleasure in sharing his theory that black kids need to be punched in the face regularly to prepare them for life in the “white man’s” world. He observed to smug applause that New Zealand treats its native people well, not like Australia where they used to hunt them for sport. There were some lazy comedy madlibs where the interchangeable punchlines were ‘Perth’, ‘Bunnings’ and ‘Hamilton’, respectively.

He was acerbic and funny, although I noted that the laughs weren’t coming as thick and fast as they had been for the night’s second opening act, Australian comedian James Smith.

“Men, you have to agree to everything a woman wants cos those bitches be crazy, amirite?!”

Not exactly cutting edge in 2017. We live in incredibly interesting times, and for $140 a ticket I expect comedians to say something new. I don’t even care if its offensive, just don’t use the same material you used in the 90s dude.

And when a comedian and grown up man starts a bit about how manipulative “housewives” are, I have to wonder if he’s been locked in an actual cryogenic chamber since the 1950s.

If you’ve been rich and famous for 30 years and can no longer relate to the Joe Schmoes that come to your show then there are ways of framing anecdotes that make your own ego the punchline, such as Ricky Gervais joking about taking a $15,000 helicopter to get to a gig once so he didn’t have to catch a ferry with “peasants”.

And perhaps you’re not as entitled to start a sentence with “Every man in this room” when you’re buddies with Kanye and the experience you’re relating is that “all women want from men is their money”. The reality for most of your audience is that it’s hard for families to survive on one income, and many women like financial independence. Also, perhaps most shockingly, not everyone “in this room” is in a heterosexual relationship. There’s 10,000 people in the audience bro, chances are high you’re not solely addressing breeders.

His proclamation that women, children and dogs are the only ones that receive unconditional love and that men’s is conditional on their bank balance was another dull but entirely personal observation. Newsflash, genius, most women’s very existence is conditional on standards of age, race, sexuality and beauty. You made an entire documentary about it.

Key learnings for Chris Rock (and a thousand other male comedians actually) might also include that many human women actually enjoy sex, not just as a method for punishing and rewarding men.

Here’s a man who has been through bitter divorce and custody proceedings, and who has the unique opportunity to process the experience by writing jokes about it. This could have been fertile soil for riffing on his own failings as a husband and father, telling some stories from his exceptional life and trying to figure how to forge a less douche-y future armed with this information. But what I heard on Saturday was that was although he was selfish and addicted to porn, it was her fault the marriage failed because all women want from you is money. He added that now he’s dating again, it’s costing him an arm and a leg. No lessons learned.

Ultimately, I have to ask myself why I care so much considering the interesting and important conversations Chris Rock generates about race in the US. I hear the imagined voice of 10,000 people asking: why couldn’t you just let it go? I care because I spent $140 of my own hard-earned cash to have a rich dude yell at me about how I’m trying to seduce men for money. He won’t ever know or care that I walked out before the show finished, and he still gets to take my money all the way to the bank, so I guess the joke’s on me.