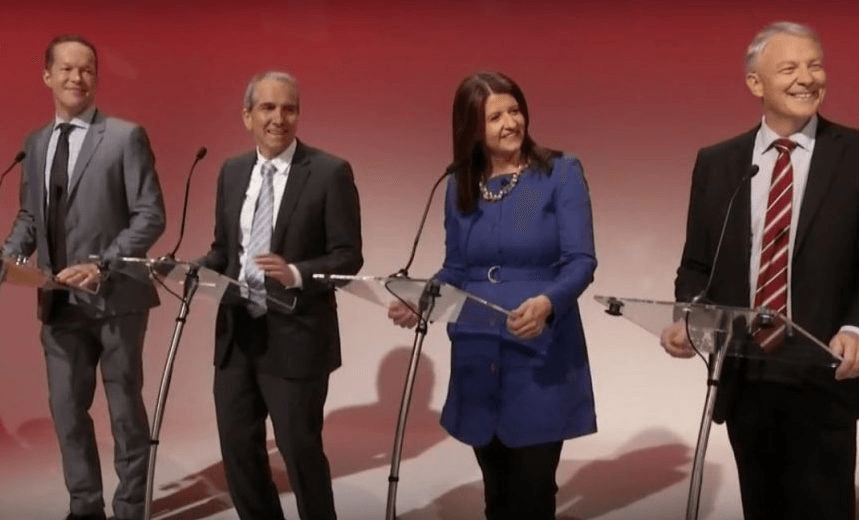 Four of the would-be mayors gathered with RNZ’s Guyon Espiner for a breakfast barney at AUT this morning. The Spinoff’s Toby Manhire was there, too.

Assembled in the television studio at AUT for an 8am start were mayoral hopefuls Mark Thomas, John Palino, Vic Crone and Phil Goff, with Guyon Espiner chairing and Todd Niall running the post-match analysis. RNZ senior manager Carol Hirschfeld prowled the floor like someone who misses making television. The AUT students darted about in front of the blood red cyclorama like pros.

But enough about the cyclorama, I hear you demanding: what were the key takeaways and the key learnings?

1. No one was terrible

There were no disgraces. John Palino is a bit of a puzzle, but he didn’t get a chance to preach his Magick Booke before Espiner brought it up all by himself, claiming even to have read some of it.

A bit of a disappointing response from Palino when Espiner threw him a lighter one late in the piece, though. What kind of mayoral car would he drive? (Pause.) “I haven’t really thought about. I don’t really care.”

2. Everyone agrees there’s a housing crisis (but…)

Unanimity broke out over the question of whether Auckland faces a housing crisis. But no one dared go so far as to say prices needed to come down. We call this the Nick Smith Paradox.

3. Everyone mostly agrees on transport

Unanimity shone again, bright as the red wash backdrop. There are differing priorities, and thoughts on how to pay for it, but all four say public transport is crucial, and there is no longer ye olde moar-roads-is-all-we-needs sloganeering from anyone.

The debate entered new and genuinely interesting territory when the candidates were asked about the Southern Initiative, the council’s project for social, economic and physical regeneration in south Auckland. All of them supported the general thrust but with reservations. Goff invoked the metaphor of Auckland as a V6 car, but “only firing on five cylinders – and the sixth cylinder is south Auckland”.

In a strong panel following the debate, Todd Niall decided sensibly to focus on the south Auckland issue, with south Auckland entrepreneur Stella Muller saying it was important that the Auckland powers “recognise the value we can bring” and address the “physical and daily grind level” in the south – pointing, for example, to the upkeep of the parks in the area compared with most of the city.

Metro editor-at-large Simon Wilson explained why South Auckland had been broadly overlooked in the mayoral race so far. “The campaign trail itself is dominated by the residents and ratepayers associations” concentrated chiefly in the east, north, parts of the west and central Auckland. “These are people who tend to be elderly, they tend to be Pākehā, they tend to be  fairly wealthy and they vote, they really tend to vote. In terms of the public campaign, they are skewing the perception of what the campaign is about. Younger people, people who are not Pākehā, are not participating in anything like the same numbers in the same process.”

At the other end of the studio, Goff and Crone were nodding vigorously.

Another New Thing to emerge during the debate was the position of the runaway favourite, Phil Goff, on Māori representation on Council. He said he’d be telling the government that it was time to replace appointed council representatives via the Independent Māori Statutory Board with elected Māori councillors, similar to the Māori constituencies on a national level.

6. Was this the right quartet?

It’s tricky deciding who to include in these debates. But wouldn’t it have been interesting to get the precocious Chloe Swarbrick along? It might have put pressure from a different direction on this lot. Another local body politics neophyte, Bill Ralston, reckons so. Unless there’s a similarly named Chloe involved…

And if Mark Thomas, why not Penny Bright? She did, after all, poll higher than the luckless Campaign star in the only published poll on the Auckland mayoralty so far.

7. Espiner is in the form of his life

He’s always been excellent, but Morning Report co-host Guyon Espiner seems more at ease than before, sharp and informed and funny. I was going to say comfortable in his shoes, but maybe not.

. @GuyonEspiner accidentally brought 2 right shoes to work this am. Was wearing socks to interview @johnkeypm pic.twitter.com/zM7t1FiI7P